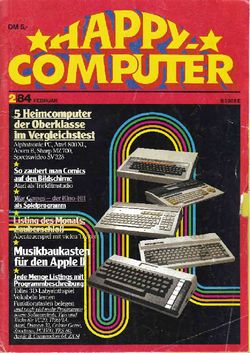 The first issue was named Hobby Computer, but another German leisure magazine has the similair title name "Hobby". That was the reason to rename this magazine Happy Computer.

In the beginning the magazine focus was mixed with information of a lot home computer systems and their application range. Also the readers can send program listings, hints, small advertisements or requests for computer problems to the editorial staff by mail.

The extra game part appers first time in issue 11/1986 and was later renamend into "Power Play", which in 1990 groth up into a seperate computer game magazine.

Very good and large computer games and applications (sending by the readers and too lare for printing in this magazine) was sold under the lable "Happy Software" and later under "Happy Computer" on datasette or floppy disk for a very cheap price.