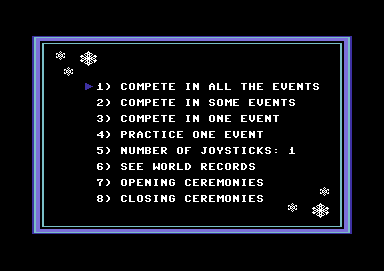 The Games - Winter Edition is the follower of Winter Games. Epyx has chosen a new selection of events. Some events were already available in Winter Games, while others are new in The Games. Together with the Winter Games is The Games a nice collection of Olympic disciplines. As it was common with sports games of that time, there are some disciplines that call on the player to destroy the joystick by jolting it too much.

The game is designed for up to 8 players. The players receive points for successfully ending a discipline. For each gold medal you get 5 points, for each silver medal 3 points and one point for each bronze medal. The player with the most points wins the game.

Epyx has secured a license from the Olympic Commitee of the United States for The Games - Winter Edition and The Games - Summer Edition.

The disciplines are partially divided into several sections in which the player has to do another action with the joystick.

In Luge the runner needs to cross the ice canal as quickly as possible.

Controls for the start:

Controls in the ice canal:

In Cross Country you need to lead the character over a previously defined distance with rhythmic joystick movements.

The aim in figure skating is to get the dream mark of "6.0" from the jury.

2.) Choreography of the movements
Here, a maximum of fourteen elements fitting the music are rehearsed with the joystick.
If you want to change your choreography again, quickly press the joystick upwards twice.
3.) The performance
The figure skater can be moved and respectively accelerated with joystick right/left. In the green field (lower left) you see the element that currently needs to be executed. The yellow and red field show the following figures. At the lower right the time bar is shown. If the triangle of this display gets green, you need to do the element according to the following table synchronously to the music:

This discipline was taken over from Winter Games. At Ski Jump you first go down the ramp as fast as possible. After the jump, the player needs to keep the jumper as long in the air as possible and finally land him smoothly.

Controls for inrun and jump

Controls during flight and landing

Tips for a safe jump

Slalom is one of the simpler disciplines. You only need to pass the gates. If the skier hooks a gate, touches the border of the track or approaches a gate from the wrong side, he will ge disqualified.

This discipline was taken over from Winter Games. Here you need to guide the character over the ice by rhythmical joystick movements. The distance can be set. (1km, 3km, 5km, 10km)

Downhill is one of the more difficult disciplines. You play both in the side and in the first-person perspective.

Concerning the graphics, Epyx has again exerted themselves to offer an optically pleasing game. The disciplines that were already available in Winter Games were created completely anew. The animations of the characters are realised very pleasantly and in detail. This game shows the graphical top form of Epyx. At the beginning you are introduced by a nice animation, that serves as Opening Ceremony. Concerning the appearance of the menues the game is, however, not as excitingly done as The Games - Summer Edition.

This version (see Links - C64Games.de) is the first choice when playing on the C64.

saving the highscore list works (after reset, use the programme "SAVEHI")

FXXS: "Somehow I have the feeling that the game was released before it was done... it is nice that you can choose the track for some disciplines, but for this you pay with long loading times. I only really liked the "Downhill" (it is probably rather a giant slalom, in downhill you usually have jumps and drawn-out curves...), the rest is already available in a similar manner in the forerunner Winter Games and/or simply only mediocre. 6 points."

TheRyk: "Actually a quite proper game, although some of the disciplines offer hardly anything new but are mostly the same as in the predecessor. However, the range of 4 disk sides without a fast loader is not really justifiable if you look at the game. The original version is only recommendable for emulator players or people who like a break every now and then. Figure skating is a totally unplayable disaster in my opinion. But since the overall design is well-done and the other disciplines (once they are loaded) are really kind of fun, I can also rate this one 6 out of 10 points."

Gangsterkater: "The game should go as Winter Games II! That is at least what I though at that time and I was thrilled when I got it. And this also over four disk sides! But already when playing it for the first time I got disappointed! The graphics is okay for that time, but the fun in the game leaves a lot to be desired! While the disciplines "Luge" and "Cross Country" are relatively much fun, this subsides quickly in "Slalom" and "Speed Skating". There is less and less enthusiasm if you manage to get over the finish line fast in "Downhill" but somehow you always get disqualified because you have crashed too often.... And only the gods themselves know what the programmers have thought when creating the disciplines "Ski Jump" and "Figure Skating"! While "Ski Jump" was a highlight in "Winter Games", it is really bad in this game! Controls are difficult and the motivation goes downhill very quickly... There is no motivation arising at all during the totally unplayable "Figure Skating". A total botch (as already in the forerunner Winter Games imho!)!!! :-( But as I am a fan of Epyx games, I like the graphics and there is the one or other discipline that is fun, I at least give 6 out of 10 points!

Werner: "The opening sequence looks more promising than in Winter Games. The loading times for the cassette version are almost unbearable. But in the 3-sided original disk version they are within sensible limits. Now my impressions about the single disciplines:

Four disciplines (Luge, Ski Jump, Slalom, Downhill) were quite fun for me. 8 points! 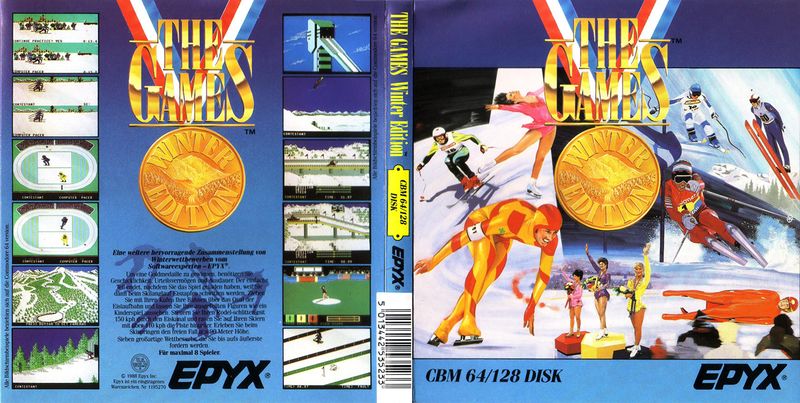 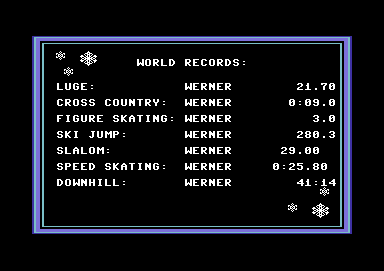