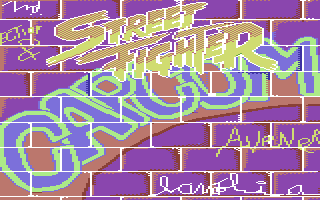 The first part of the known game series...

Gouken was once a pupil of the mighty Goutetsu, where he learned the martial arts of Ansatsuken. This combines the most effective techniques of the Budō martial arts Karate, Judo and Kenpō. After many years, Gouken was a master of this art and he himself started to teach. His pupils were the young Japanese Ryu and the American Sunny Boy Ken. He educates the two dissimilar characters thoroughly in the art of unarmed fight until after a long training they are one of the best fighters in the world.
In 1987 it finally comes to a worldwide competition of the best street fighters. The bearer of the title, a Thai named Adon, challenges the most talented fighters from all countries to compete in the tournament for his title. Not only Gouken's pupils follow this call, also Chinese masters of Kung-Fu, Ninja warriors and former professional boxers take part in the tournament, and need to be defeated before you can enter the final against Adon.
In the role of Ryu, the player needs to defeat nine opponents from five different countries.

After the Muay Thai master Adon is defeated, you have won the Street Fighter competition.
For chasers of the highscore the game restarts after this victory with Retsu.

The game was released in two different versions, which could partially be bought together on one disk or cassette. Each side of the medium contained one version. This article is about the so-called US version, the other is named the European version.
The background scroll of the original version was not converted and also the bonus level is missing. The final against Sagath was deleted without replacement, in this version Adon is the end boss.
There are loading times between the fights, but these are kept rather short. 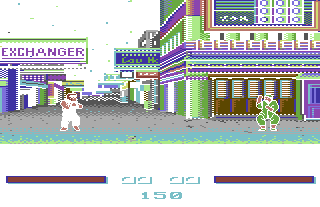 In the two-player mode, player 1 competes with Ryu against player 2 with Ken. One needs to win 2 fighting rounds, then the match ends and the start menu is loaded again.
In other conversions the winner will now start the regular tournament in the one-player mode, but this was deleted in this version. So it is not possible to win the tournament with Ken. 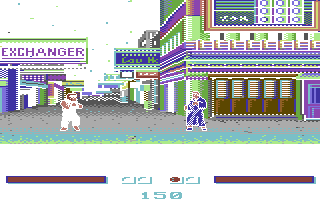 The mean Gen has an enormous reach...

It is assumed that Ken or Ruy are to the left of the opponent.

The special attacks are hard to do, but after some practice you can defeat with them relatively easily even the enemies in the expert mode.

There are no cheats known. Some of the cracked versions of the game have trainer functions.

Power Play October 1988 (Graphics: 80 Sound: 64 Vote: 59): "Concerning the gameplay it has not the class of a International Karate+, because the computer enemies are not very clever. When you have seen all enemies and background graphics, the motivation will sink drastically to go through all this at a higher difficulty grade. Fans of fighting sports get with Street Fighter a graphically nice programmme that is fun for a bit of time, but does not leave behind an excessively good impression." (Original German comment by al)

Shmendric: "Although I liked to play Street Fighter during the holidays in Italy on the arcade machine, I could not warm to this version. It does not compare well to the original and also not to other beat'em ups. If you are in the mood for beating tourism across the world, you are better advised with International Karate. By the way, a small tip for speedrunners: It is totally enough to throw Hadouken at the opponent every second, all other moves are then superfluous."

TheRyk: "The well-animated HiRes-Sprites are only one aspect which makes this version look by far more beautiful than the Go!-Version. However, while the Go! version was too fiddly, this one is way too easy until you meet Eagle. Making a game too easy is no better than making it too hard, consequently I can't rate US Gold any better than poor, i.e. 3 points."

DerSchmu hands out slaps to the bitter end... 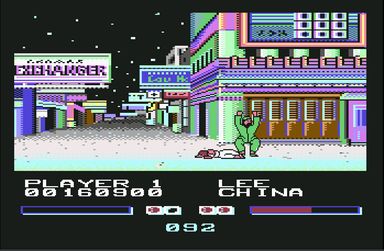