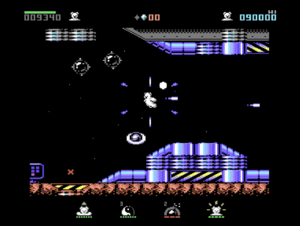 POLAR BEAR IN SPACE! is a single-player mixed shoot'em up and platform game released in December 2021 for the Commodore 64. It was developed by Unrolled Loop Studios LLC and published by Psytronik Software.

The protagonist, Polar Bear, is stranded in space. Having found a nearby alien space station, he must collect the 99 krystals scattered across its underground caverns. Once collected, he can then use these krystals to charge and operate the station transporter in order to escape.

Goal of the game is to help Polar Bear navigate the space station and its caverns, and to ensure his safe return home.

Polar Bear arrives defenseless and with the ability to run and jump. He can collect extras, such as a jetpack, shield, and smart bombs, which deplete with use, and weapons upgrades, which downgrade after a demise. These extras allow him to fly across the space station above ground and fend off the various alien enemies attempting to prevent his escape.

Along the way, Polar Bear can also pick up his companion, Snowball. When collected, Snowball deflects enemies by orbiting Polar Bear. With combined forces, Polar Bear and Snowball can also fire a high-energy beam that destroys all enemies in its path immediately.

Each underground cavern is guarded by a terminal, which must be deactivated to unlock the cavern entrance. Polar Bear can do this by unscrambling the visual pattern displayed by the terminal within a given time limit. The time limit decreases with each subsequent terminal, increasing the difficulty.

Once Polar Bear has collected all krystals, he can use them to charge and activate the transporter to return home.

The game consists of a side-scrolling above-ground level about 28 screens wide, and nine flip-screen underground caverns spanning a total of 40 rooms.

The background graphics follow a clean, technical look, occasionally broken up by more organic elements. They are implemented with multicolor character mode and use raster interrupts to display multiple color schemes on each screen.

The above-ground playfield scrolls smoothly at a full 50 Hz.

The main character is rendered as a combination of one multi-color fill and one high-resolution single-color outline sprite. Enemies display using non-multiplexed hardware sprites. Bullets and phasers are drawn using characters, and smart bombs multiplex one of the player sprites onto the screen.

Polar Bear's demise sequence is of note in that the game implements a particle system to render it. In this sense it is similar to Archer Maclean's Dropzone and Sensible Software's Wizball, which also go to great lengths to make that sequence as spectacular as possible.

Jon Wells contrbuted four music tracks, which are reminiscent of Martin Galway's compositions. The cassette version includes an additional piece, which plays while the game loads from tape.

Only the (approximately 30-40) in-game sounds play during actual gameplay. They do make for an appropriate atmosphere, however, and provide a sense of connection between action and reaction.

The rich explosion sounds, paired with the respective visuals, give a dramatic flair to the use of smart bombs, and even to the explosion of the protagonist.

RUN/STOP  pauses or unpauses the game

Q  quits the running game, if it is currently paused

In joystick mode, the player can jump and fire shots with the first (or only) joystick button. When using a POTX/POTY multi-button controller, shield and smart bombs can be activated using the additional buttons (2 and 3). Otherwise, the keyboard can be used for this purpose:

Any Other Key  toggles the shield on or off

In keyboard mode, the game can be controlled via two separate key blocks, which allows both left- and right-handed players to play. The following keys indicate Up, Left, Down, Right and Fire 1, 2, 3, respectively:

Polar Bear can collect various extras along the way. With the exception of his companion Snowball, which appears by itself, extras appear randomly when dispatching enemies. A spare bear is awarded every 50,000 points, unless the player already has the maximum of three spare bears.

Retronerd: "PBIS! one of those games that will split the audience, but definitely among my absolute favorites for the C64. Its simple rules belie the fast pace and difficulty: you have to immerse yourself to master it. But I found my perseverance worthwhile: the less tentative you get about the controls, the more the game rewards with an engaging visual and aural response. The graphics are excellent, with smooth scrolling and colorful and beautifully drawn backgrounds. There's no in-game music, but the various tunes that play otherwise add to the mood, and the sound effects are plentiful and very fitting. A must-have for the C64 in my book."

ZZAP! 64 reviewed the game twice: once as a pre-release version in issue 4[4] and once at the time of release in issue 6. The final version included changes, such as non-respawning enemies and easier gameplay with reversed terminal controls and less persistent mine attacks, and received a higher score than the pre-release version.

According to Psytronik[5], a physical cartridge version via RGCD is planned. 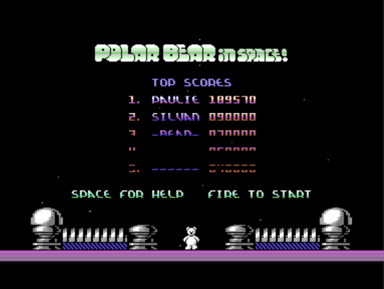