Carried through the eddy of space an time you land as the Last Ninja in Tibet in the Palace of Mysteries. The Shogun Kunitoki, the most almighty ruler of the palace wants you, as the last of all Ninjas, to join his followers through bribery and shows you his innermost sins. No one in this world has until now been able to resist the Shoguns. Only you are now standing between the hitherto existing order and Kunitoki's new world domination of chaos.

Story:
The Ninjas were the most feared fighting opponents of their time and were even feared by the very mighty Samurai. The known mystical shadow fighters were the elitist fighting power of the 9th century in feudal Japan. They can turn their bodies into real fighting machines. Their mighty weapons such as dexterity, stealthiness and invisibility made them invincible, if not even immortal.

Centuries later the Last Ninja Armakuni remembers those fighters. However, he makes a proud and courageous effort to keep up the moral order of the good against the lasting evil and merciless attacks of his archenemy Kunitoki.

The fight of good against evil leads Armakuni to the island of Lin Fen, to the shrine of the "White Ninja" in part 1 (The Last Ninja), and to New York in part 2 of the Last Ninja Saga (Last Ninja 2).

After the success of the first and second part of the Ninja series, the third part was also designed classically. System 3 continues to rely on the isometric perspective and designs 5 levels. Each level has a different design. Kunitoki has now drawn back to the so-called „Palace of Mysteries“ which is shown in 5 level of each 12 to 16 screens. Alterations in the third part are honour and the „Bushido“ power (which is shown by the colour of the dragon at the lower middle). If the player avoids fights, the character does not win honour and thus loses his Bushido power. According to the manual this is important for finishing the game and for the power altogether.

Concerning the intro, System 3 caps it all off and creates one of the most beautiful intros that the C64 has ever seen (and will ever see). For the end screen they did not work an the same high niveau, but this is also nicely designed.

Concerning the gameplay, the game corresponds to his forerunner Last Ninja 2. They abdicated long walking distances and wild passages of jumping. There is even more emphasis on the puzzles. To find the objects fast, there is an info display (at the upper right) in the game screen.

= Walking along the way

= walk diagonally along the way

= turn nunchuks to raise the strength

= Ninja jumps into the walking direction

A complete manual (PDF) of the game in

can be found under "Manual" on C64Games.de

H.T.W: "Now our Ninja must compete against his arch enemey Kunitoki for the third time. A wonderfully animated intro, almost in movie quality, gets you in the mood graphically and acoustically to an utterly impressive game, which again is shown in isometric view. There are more puzzles than in the forerunners (so you e.g. need to convert the glove with nails to a climbing instrument right at the start) and also a detailled outro but unfortunately also again controls that need getting used to. Despite small points of criticism it is a worthy conclusion of a classic game series."

MontyMole: "I have never understood why System 3 used a completely new engine here. Last Ninja 2 was absolutely fluent and also the controls were no trouble for me. Last Ninja 3 somehow seems unfinished. With exception of the speed, which likes to slow down sometimes, the controls are toally mucked up here. What adds to this is a totally lame level design, uncreative puzzles, collision bugs en masse and a fighting system that does not let you survive three enemies. It is a very great pity. The title can make many points with graphics and atmosphere, but the rest is far behind concerning the gameplay. I give 4 points."

ThunderBlade: "Atmospherically even more dense than the first two parts and graphically the most challenging, which was just realisable - this is Last Ninja 3. This game has captured me, but sometimes also got on my nerves, because finding the items is sometimes a bit difficult. The difficulty grade is high, but just about managable - I will never forget the triumphant moments when a level was played through. As with hardly any other C64 game you have the feeling to merge with the game's character and to be really at these mystical places. For this I do forgive the odd enemy walking on one spot and smaller bugs. The loading times between the Game Over, intro and return to the game were at that time eliminated by me with my RAMDisk system for the SuperCPU (version by DMAgic). Vote: 9 out of 10 - in the long run only Last Ninja 2 is even better." 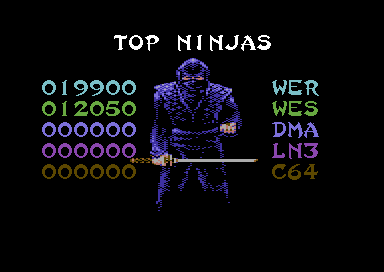