For 200 years the clan of the Fujiwara reigned Japan. Their ruling was very cruel, so that some craftsmen and farmers decided to leave their homeland and to move to the Toga-Kuve Mountain. Here they trained themselves to be the best warriors of Japan: the Ninjutsu. 400 years later the Ninjutsu were feared by everyone, after they had ended the tyranny of the Fujhwara Clan. But how could it come else: already another Shogun strived for getting to know the secrets of the Ninjutsu. The Shogun Kunitoki made a vicious plan. Once in every decade the Ninjutsu met on the island of Lin-Fen, where they paid their last respects to the shrine of the “White Ninja”, to get further fine-tuning.

Kunitoki could overpower the convened Ninjas and then began to instruct his own men in the martial arts of the Ninjas. With the help of the stolen Koga scrolls he could realize this. But Kunitoki didn’t know that a Ninja had stayed at another place during this whole battue, to guard the shrine of the Bunkurkan, and survived. Armakuni was this time the one to do the task, which made him the last of his craft. He heard of the happenings on Lin-Fen and immediately rushed to take horrible revenge, to get back the Koga scrolls and to restore the honour of the Ninjas.

The Last Ninja was published by System 3 in 1987 and today counts as one of the absolute classics from the epoch when the C64 had his heydays. Here you control the Ninja Armakuni through 6 levels, which lead through mountains, gardens, dark dungeons and finally the palace of your enemy Kunitoki, who has wiped out your whole Ninja clanship and has removed a holy document. The view of the game is kept in an isometric perspective, which at that time was nothing new but which has never before been shown with such a technical perfection.

The first 3 levels, which – concerning the length - form the greatest part of the game, unfortunately do not differ much graphically, but this does not derogate the fun. The graphic itself is was very good considering the means of that time and was outplayed by the successor one year later. The whole thing is underlined by a really ingenious soundtrack. At that time it was contributed by a cooperation of Ben Daglish and Anthony Lees and counts until today as one of the best C64 music pieces of all.

The only critical points would be maybe the puzzles which are often more than illogical or really far-fetched. So e.g. you need to touch a vase somewhere in the palace, which is neither marked somehow nor made visible by other hints, to later be able to cross some stairs without harm. The giant archer at quite the end of the game can be passed by touching a green speck on the floor and by this getting invisible for a short time. Likewise, collecting of some items is not fully developed, which was improved in the successor.

On the whole it is still a great game, that suffers a few teething problems, but nevertheless convinces by its atmosphere and was a big step ahead of its time.

= go along the path

= go along the path diagonally 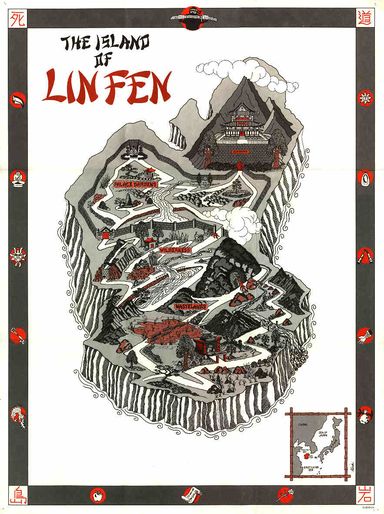 = with rollover jump up

= with rollover jump down

A complete manual (pdf) for the game in

can be found under Manual on C64Games.de

Different solutions can be found on C64-Games.de, here an excerpt:

Go southeast. There you will meet your first enemy. In the further course enemies will not be mentioned. Further in the southwest and south you will see a sword lying on a rock, pick it up and press space to use it as a weapon. Go further to the southwest and you get to the first river.

Next jump with joystick left, last jump with joystick down. Done. The way further to southwest, southeast until you see a dead man lying on the right wayside. Take the Nunchaku from his belt Further to southwest passing the key (leave it for now) and the Buddha. If you want, you can pray at the Buddha. For this, put away the weapon (space key until the field “Using” is empty) and then go to the Buddha. There you will automatically knee down and right at the display you will get a hint to what you should look for next. Take the bag in the next screen . . . and then back (northeast) to the key and pick it up.

Now turn back again, passing the Buddha and further to the southwest to the next road junction. There you go to northeast and you see the bank of a swamp. On a rock at the left wayside you find smoke-bombs, pick them up (in one package there are three bombs, packages are unlimited). Now you need to cross the swamp . . .

For this step on the first piece of wood at the rim (image 2) and jump twice with joystick up (if you end in the upper right corner jump once more, do not walk). You get into the second half of the swamp (image 3). Jump another two times with joystick up and you are at the bank. Leave the screen eastwards.

Pray to the statue and you will get a hint to get you an apple (extra life). Further northeast, at the junction southeast and you get to an apple tree. Pluck an apple there. Every time you have only one life left you can pick another apple here! Go the way further to the east and take the Shurikes.

Now you need to go back to the last junction, this time take the road northeast. Always go northeast and you will get to the dragon cave. To disable the dragon you need the smoke-bomb, which you need to throw in front of his nose. For this you need to stand correctly: The left leg needs to be exactly on the rim of the grass, where the shadow of the first stone begins (the leg covers the beginning of the shadow)

Now choose the smoke-bomb with the space key, then press the fire button (and keep it pressed) and pull the joystick to the right. (If you miss three times you need to fetch new smoke-bombs from the other edge of the swamp!!) Now pass the dragon and go further northeast to the end of this level

Andre2905': "The game was in my opinion quite difficult, the puzzle illogical and the game principle out of date (touch something, then something happens, pick things up that you need later and bash enemies). But the whole thing is in such a technical perfection, that the game was played again and again and together with the trainer and solutions from the Happy Computer it is an absolute evergreen! 10 points from me!"

Shakermaker303: "I will never ever in my life forget the green Ninja eyes. Difficult game and honestly: without manual I couldn’t have made it. But anyway due to the graphics, plot and the fantastic music (track in level 1 is for me the SOUND per se!) a real highlight. When talking about games for the C64, "The last Ninja" is always mentioned. Cult game = full points for the voting."

Since 25.04.2008 the game is available as download for the Nintendo Wii Virtual Console.

There are different statements about how many disks the game has. Basically it seems to be two, although there are versions with 4 disks with new levels. 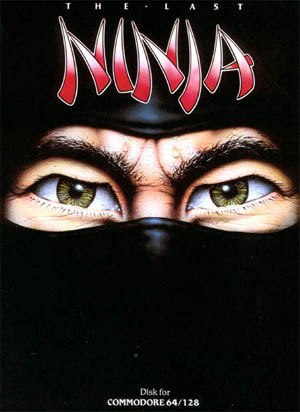 Complete video from the so-called Moleplay Series with comment 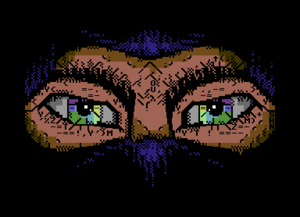