From the middle aged Far East our Ninja ended up in modern New York, to defeat his arch enemy Kunitoki again, who had taken flight to this place with the help of a leap in time and had built up a new reign of terror. On the way to the showdown you steer Armakuni through the New York of today, which leads you amongst others through parks, streets, drug laboratories and further well-made scenarios. This part is also a bit more humorous and enriched with some side blows to pop culture. So you are later thrown at with flower pots by people looking out of the window, suddenly facing an urban city legend in the shape of a crocodile in the canalization and on a windowsill of an office you see the DC hero Superman fly by. Concerning this topic, one can actually see parallels to the, at that time slopping, urban Ninja movies, which spilled over the market in a not so small quantitiy by the B-director Joseph Lai or the actor Shô Kosugi (to name the more popular representatives).

After the success of the first part it was easily predictable, that the team around Mark Twiddy of System 3 released a successor in 1988, thus a year later. The C64 community was already astonished by the technical possibilities of the old Commodore, but the successor was about to excel this highly. The graphics by Hugh Riley, which at that time had been chosen the best of the year in the Power Play, set new standards. Also remarkable is the music by Matt Gray, which mainly consists of rocky pieces and proves that the SID chip is rightly praised by many C64 music artists.

Concerning the gameplay there is really nothing to complain about. The mistakes from part 1 were completely removed. So the control of your Ninja is much smoother than the forerunner and also the picking up and using of the items was simplified. The levels themselves are much more diversified and more compact. In the first part, there were extremely long trails, on which nothing happened except for some fights, but now you have items, crossroads or puzzles in every single screen.

Also the by many hated hopping passages got less and (except for the boxes in the Basement level) one is not forced to land painstakingly exact, so one finds them a bit easier.

= walk along the way

= walk diagonally along the way 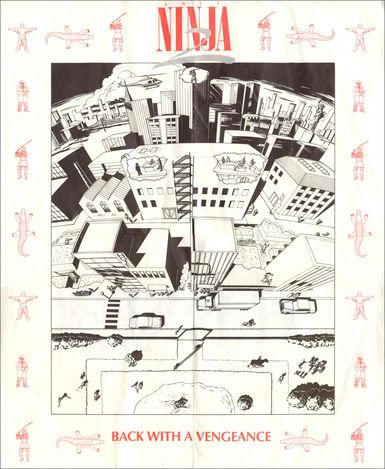 After the start of the game you find yourself on a concert stage in the "Central Park“. Go behind the curtain and hit the yellow square which shortly flashes when you enter the room. It loses its colour and on stage a trap door opens. Jump into it and pick up the key in the store room. Leave the room through the stage entrance. Go to the left below the lower border of the screen. In the next screen there is another cop, then leave the stage area through the big passage in the encircling wall. At the wayside there is clown juggling with knives, who also throws with them. With somersaults you can avoid getting hit by the knives and reach the next screen. Here pick up the parchment lying on the wayside (from now on, every item flashes shortly when entering a new screen). Go further until you reach a wooden construction that is integrated into the wall. Climb up this scaffold. On the spur to the left until the sill is destroyed at two places, jump over them with a somersault. Then pick up the "Kendo Stick", back to the scaffold and climb it down backwards. Back to the stage area and to the right. Before that in the garbage bin between the two park benches you find a set of "Shuriken".

Just in the next screen again to the right, to then leave the stage area anew. In the ladies' room you find the half of a „Nunchaku“. Back to the stage area, here go to the right. After the following screen go again to the right, here you find a hamburger at a food stall (gets you a bonus life!) and then another public toilet. Here you find, again in the ladies' rooms, the second half of the Nunchakus. Back to the stage area, leave the screen at the left and then get to the iron gate. You can open it with the key, that you have found under the stage. In the next screen jump on the boat and with a second jump you reach the other shore. A swarm of aggressive killer bees wait here, which you can only escape by taking flight. Take the shortest way to the upper border of the screen. As the other shore is outside the visible area jump into the unknown - you land on a small island, next to which there is a boat (you only hit the island, if you jump from the uttermost left rim of the path!).With the Kendo stick touch the boat and it drifts away. Back to the bees and to the left. The boat now drifts past. With two somersaults jump to the boat and to the other shore of the canal. Now leave central park.

Reinhard Klinksiek: "All in all a game, where there is actually nothing to complain about, the graphics and the music are absolutely great and the levels offer lots of diversity. It is a matter of taste, if the Ninja-topic is a bit misplaced in the modern New York, I personally liked the first part better concerning the topic, but everyone has to decide that for himself."

Kiki77: "For me the best game and at that time the reason for buying the C64!"

Shakermaker303: "As Reinhard, I found it needs getting used to, to see the Ninja in the modern scenery of a city. The scenery of the first part fitted better. There is nothing to mention about the graphics and the handling, but I can't cope with the music. That's why I don't give the full points, but "only" 9 out of 10 points."

H.T.W: "With five "lives" and different instruments to murder someone, which you find at strange places, you start the chase for Kunitoki again. Here you fight and puzzle yourself through six levels (level 7 is not a proper level, but the "showdown"), which each consist of about 15 different screens. The pseudo 3D graphics of "The Last Ninja II" is even better than the one from the forerunner and also the changing music from level to level is just great. The controls are easier to learn, but unfortunately there is still no highscore list. And now I have to play this game through once again (already too long ago) to really write a proper critic...".

This part of the series was released in 1990. In contrast to the 16bit versions (Atari ST, Amiga) where this game is a remake of The Last Ninja 1, it is in the 8bit version (C64) an "update" of Last Ninja 2 (see also the hints on the cover) and was only equipped with a lead text, an optically changed status display and a different background music. The gameplay was not changed. 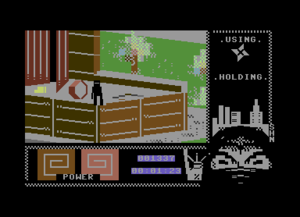 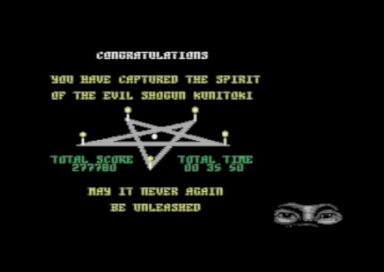