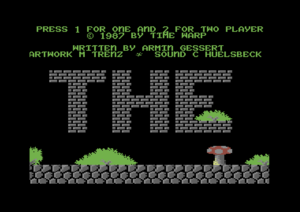 The start screen: The title screen of "The Great Giana Sisters" is scrolling from right to left.

The game The Great Giana Sisters (only written in the intro Gianna) is a fantastic jump and run game from the year 1987. The original version and program code was developed on a C64. The game was developed by the game company Time Warp Productions and was published by the German publisher Rainbow Arts. Giana Sisters looks like the similair and sucessfull NES game Super Mario Bros, but finally it was only a great clone. The C64 scene and players ignored that. Today Giana Sisters is one of the popular and famous computer games on the "bread box".

One night, when little Giana from Milano was fast asleep, she had a nightmare. Giana found herself in a wondrous world with strange creatures, who want to prevent her from going home. Here everything was huge and strange. Giana can only leave this world, if she finds a huge jewel. On the way she can collect diamonds and many extras. Fortunately she is not alone, because her sister Maria has also this dream. The world consists of 33 levels and in the last stage Giana can find the needed gem, to return to her world.

The game The Great Giana Sisters is played on a 2D screen, whose contents scrolls only to the left out of view. Sound and music are well harmonized with the game and today are computer game music classicals. The sound magier Chris Hülsbeck composed this game music, which is one of his bests and famous works. The sprites are very good and cutely animated. The game play is also very good playability by a exact joystick query. The coder team Armin Gessert and Manfred Trenz developed one of the best Jump & Run game for the C64. The game contents 33 stages or levels with different game music songs. Similair the NES game Super Mario Bros are splitted the stages into normal world and underground (or cave) levels. After a level part exists final bosses, which aren't easy to besiege. If this game is played with two players, the second player steers Maria, who has different colour of hair and clothes.

An animation from this nice game.

The entrance to a bonus level is very easy.
But after leaving this bonus level Giana are jumped into the air and the player must react shortly to safe Giana on a safe platform, because Giana can lost easily her life!

There are some "inbound" cheats, i.e., from some hidden places you can skip three levels. Particularly, levels 22-25-28-31 form a "chain" in the sense that you don't even need to see the other levels between 22 and 31, see the warp blocks above.

Pressing the keys A +R +M +N  at once => jump into the next level!
Alternatively you can add the I  key: ARMIN, which reminds of the developer Armin Gessert.

The following pokes can be entered after a reset:

Sledgie: "The game reminds me a bit of the Mario series by Nintendo. Just with sisters instead of brothers. This was also the reason why it had to be taken from the market: Nintendo filed a lawsuit. "The Great Giana Sisters" has nevertheless its own style. In parts there are really difficult passages and the time limit is very short. Otherwise it is again and again fun to play. Also in the 2-player mode (which sadly only works by turns) you can fight about points."

Guybrush: "One reason not to like the Nintendo-mob...they have allowed the Sisters to be forbidden because of these two annoying, moustache-wearing overall-plumbers. Thank you for nothing, Nintendo ;o)!!!"

triton: "It IS a cheeky Super-Mario copy, but what a copy! From the design of the levels and the graphics to the striking sound everything corresponds. A jump'n'run game without bric-a-brac, as it should be!"

87.160.253.59: "In my opinion this is a game, that the world not necessarily needs, except if you don't have a Nintendo, then you need the game ;). However, I like the music in the game very much, but you should hold your horse when talking bad about the talking down by Nintendo, because if there wasn't an original there cannot by a copy. So it would be better to thank Nintendo that out of their idea emerged another classic game."

Gamemaster: "When I played this game in the late 80s on the C64, I was captivated. Ingenious appearance, great levels, and very much draft for a jump'n run. Applause for Chris Hülsbeck for this incredible soundtrack, that even today makes for a catchy tune. Shortly after that I got my NES with the plumber game. Of course, Mario could enthuse me more, it had the better controls, better graphics and a gameplay that I sense still today is absolutely perfect. But the disadvantage was that Mario was played to the end too fast and the sisters were (due to the controls) to hard. As in every jump and run you came a bit further with every try, which characterizes both games positively. In my opinion the game is one of the cheekiest theft of all times, but also one of the best. There is nothing to accuse Nintendo for, as in these times the market was very different. Today Nintendo would not really care about it much, as they pride oneself when somenone copies (most of the time poorly) from them and are used to their innovations being nicked. Regardless of the prohibition of Giana Sister, everybody had it anyway."

Shakermaker303: "A very known game on the C64. Greatly made, the many colours, the nice animations, the cool music and the wit of the game. It really is very classic and that's why I give the full 10 points."

Shmendric: "At those times I played it for hours, in turns in the two player mode. It belongs into the list of 64's classics rather far up, no doubt."

Patrick: "After so many years I recover this game!!! Thank you for this great page. I played this game for nights in the early days! A game one should know!

Whatever: "Why is this wiki page trying to sell me Great Giana Sisters? It's a fun enough game, and it was also a flagrant copy of the design of Super Mario Bros. The end."

Keule: "Giana-Sisters is the jump'n'run per se...especially the addictive playability makes it for me one of the best, if not THE best C64 game ever. 10 out of 10 points!"

Flodder: "One of the very rare occasions in which the blueprint is better than the original. A game that should be in every collection."

The first unofficial Giana Sisters hack, called "Giana Sisters 2" was created by the team "New Wave". It has 32 new levels, and has a feature to play these mixed with the old ones in the "grand loop" section. Stage 33 for the new levels doesn't exist, and a bug occurs in the game when stage 32 is finished (also stage 30 of the old ones had been removed). This is also the first Giana Sisters hack, where the maps (including bonus sections) are loaded from the disk instead of packed into one PRG file. This made the stages and particularly the bonus sections a lot harder to load with freezing music for a few seconds, as there is no proper flow between the levels.

Several more Giana Sisters hacks have been made with the german level editor called "Giana Sisters Construction Kit". The program was made by Professor Knibble and Sandy, and has a german tutorial as well. The editor has no level packager, and has several bugs which makes it hard to use. Due to legal issues, the software wasn't released officially, and only a few programmers used it for their own levelpacks.

Known hacks (with the assigned disk number) written with the construction kit:

The latest Giana Sisters hack called "Giana Sisters II" was released in 2005, and is often considered as the best one. It was created by the team "7A3" in 1993, led by Merlinthe7thSign, originally with a commercial purpose. It fixed some of the original game bugs, removed some sprite issues, added better collision detection, and added 41 new levels. Some of the enemies were changed, and the hack also has some new features like swimming and flying. The leveldesign here is very faithful to the original game, although there are some new style levels like hell and heaven. The ARMN code had been removed from this hack, and levels after stage 14 have been loaded from the disk (the flow is better than in Giana Sisters 2).

A hack called "Super Mario Bros" was released by the team "Abyss" which changed Giana's sprite to Mario, and changed some other sprites as well to make to game look more mario-ish. The end result was a disappointment as the new graphics doesn't have the quality neither of the original game, nor of the real Super Mario Bros.

"I Want More Diamonds" is a Giana sisters based platform game, but was made with a different engine.

Giana's Return is a free, inofficial follower with coloured graphics in retro style. There are 7 worlds with each 8 levels and and each one end boss to manage. Homepage

Giana Family is a remake, where the graphics have not really changed. But the fun is still there. Download 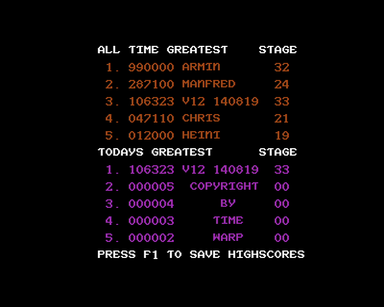