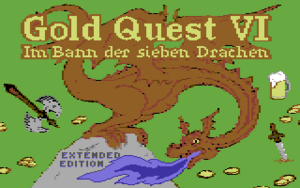 The sixth part of the Gold Quest Saga is quite out of the way compared to its predecessors. For the first time in the history of the game series, the Construction Kit S.E.U.C.K. was used. Gold Quest VI is a 3D dungeon game programmed in BASIC. Of course, you slip into the role of a brave dwarf hero again this time. But this time it is not the famous Sledgie - instead the player can create his own hero.

With a thirst for beer and a greed for gold, you can experience another adventure in the kingdom of Roglia, the land of the dwarves.

The place where this adventure takes place is the enchanted mine of Dimor, which lies deep in the south of the dwarf kingdom of Roglia. Every dwarf knows that this ancient mine still contains vast quantities of gold pieces and precious stones. When the dwarven people fought a war against the hungry ogres from Traublonia almost 200 years ago, every dwarf capable of bearing arms was needed on the front lines, and no miners or guards were left in Dimor. After the army of the little people had won a glorious victory in the legendary Battle of Kharakon, thus ending the war, some inhabitants had unfortunately taken up residence in the mine in the meantime. Among them were little pixies, but they didn't really cause them any problems. And the fairies that were now fluttering around in Dimor were also quite friendly creatures and did not bother the dwarves any further. But some of the other intruders proved to be very annoying...

For a wild and uncouth tribe of orcs, who really have no business in a dwarf mine, had set up camp in Dimor. And the mood is quite cheerful, for the uninvited guests brew some rather strong beer in the cool tunnels of the mine. Some cheeky hobbits have even opened small taverns down there, as they have no shortage of customers. The halflings have allied themselves with the gnomes for their protection, who in turn trade in weapons and equipment. For a cursed mine, Roglia was really quite lively.

Under the leadership of the famous dwarven hero Sledgie, the warriors of Roglia finally made another attempt to recapture the mine. But it seemed that not only the black magic powers of the banshees were at play. For the number of enemies kept increasing the deeper the dwarves ventured into the tunnels. The mine, occupied by indomitable enemies and apparently cursed, did not cease to resist the dwarves. In the deeper levels, Sledgie's elite unit eventually even encountered some powerful chaos dragons - and there was only one orc powerful enough to subdue these huge creatures. Fulgore, the infamous orc shaman was apparently also staying in the mine and commanding the sinister army. The motivation of the troop sank more and more, and the dwarves finally stayed more in the taverns of the hobbits instead of hunting greenskins. Only their leader Sledgie could not be dissuaded from the hopeless endeavour. As a typically stubborn dwarf, he finally wandered alone through the corridors of the mine, bravely swinging his axe. But it came as it had to, after some time Sledgie did not return to his warriors in the tavern. The rescue teams sent out could not find their leader. One of the pixies informed the dwarf warriors that Sledgie had had a few too many beers on his tour and had finally slept it off in an inconvenient place. For the orcs found him - and Fulgore the shaman captured him.

Sledgie's deputy and the rest of the warriors were now in a real fix. For the exit from Roglia had also been sealed by the dark forces with the help of black magic. It was easy to get into the mine, but not easy to get out again. Thanks to thorough reconnaissance, however, this was known to the dwarves in advance, and the rune mages forged an artefact animated by a powerful teleport spell. With this, an orderly retreat would have been possible at any time. Unfortunately, however, dwarven rune magic has an Achilles' heel, for the magical counter-element to it is dragon magic. That is why dragons are among the dwarves' arch-enemies. They had not expected to find the mighty Fulgore in Dimor. Let alone could the dwarven rune specialists have guessed that he was accompanied by his seven dragons. With the help of these magical beings, Fulgore had cast a spell on the mine. The teleport spell could not be triggered. The warriors were locked in.

Another problem was that the artefact could only be activated with a special mithril ring. And this ring was worn by Sledgie on his finger.

Since then, the troop of brave dwarf warriors has been stuck in the mine and has taken up quarters on the top floor. Occasionally, individual dwarves of the unit dare to enter the deeper shafts of the mine in order to grab a sack of gold as tunnel rats or, with a lot of luck, even to free their leader. Many of them never returned. But dwarves are stubborn and the gold is tempting. Besides, you don't just abandon a captured comrade!

Strange? But so it is written...

Goals of this Game[edit | edit source]

The player dwarf is a member of Sledgie's elite unit and is stuck in the mine. He is a particularly brave representative of his people. No wonder, he has already experienced a lot, mastered some dangers and his beard goes all the way down to his belly button - unless, of course, he is a heroine, because dwarven women do not have beards, even if the stupid elves like to spread such rumours. The player-dwarf is determined to free Sledgie, unravel the mystery of the enchanted mine - and make a tidy dusting along the way.

In short, Gold Quest VI is all about collecting as many points as possible for the high score. To do this, you fight your way deeper and deeper into the corridors of the mine and collect as much gold as possible. If you finally come across the chief boss orc shaman or his dragon, you can start a fight with him. If you are victorious, the curse is lifted from the mine and Sledgie can be freed from captivity. The gold miners of Roglia can resume their work and the player is entered into the Great Book of Dwarven Heroes.

Objectives of the gameGold Quest VI - Under the Spell of the Seven Dragons is a labyrinth game in 3D view, a so-called dungeon crawler. The game was implemented in BASIC with PETSCII. A modified character set was used for the texts, but you can also switch to standard characters. Individual game scenes and actions are accompanied by sound effects.

During the actual game, the game is divided into three areas: the map, the 3D window and the event display. Between the individual stages, the player can enter taverns, which have their own view. In the taverns, various menu-driven actions are possible. The player can also receive subquests. Gold Quest VI is designed for keyboard control, but can also be operated with a joystick.

For the game, a character is created at the beginning by choosing a name and selecting one of four classes. There is a final score and a saveable high score list.

Gold Quest VI is available in German and English. 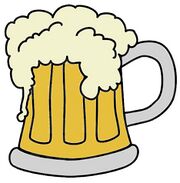 Here you can write a solution method, walkthrough or something similar. 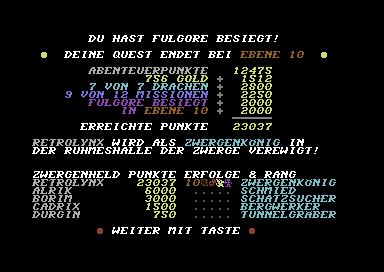