Gold Quest II - The Dwarves of Doom is the sequel to Gold Quest. After the three-headed king of dwarves was defeated by Sledgie, he was hit by his curse. Sledgie has to enter the realm of the dead dwarves, to free himself from the curse. There he has to cross 6 new levels, to finally fight against the ghost of the dead dwarf king in the bonus level. Only after he has destroyed the 3 brains, the adventure is solved.

The path to the aim is very difficult. In Gold Quest II also gold and jewels are helpful. This time you cannot only find them on the ground, but also in treasure chests. In the first level Hell of Gold Sledige reaches the realm of the dead. It stretches over two more levels Wizard of Gold and Maze of Gold. From the 4th level Body of Gold you enter the body of the keeper of the underworld. Using the bloodstream in the 5th level Blood of Gold Sledgie finally reaches the brains of the keeper: Brain of Gold. There in the Bonus-level he has to erase the memories to reach his goal.

Uni- and multi-coloured moving sprites on a simple background graphic in all colours of the C64. When moving the pawn, the screen scrolls from bottom to the top. In the 5th level Blood of Gold, the screen scrolls only for the display of the flowing of the blood. The intro and the music were created by Richard Bayliss.

Richard Bayliss has integrated a trainer mode in Gold Quest II. It can be activated as follows:

FXXS: "Solid action for in between... I only miss a highscore list and different tunes per level would be nice... all the same 7 points..."

H.T.W: "Not bad for a SEUCK game. But as already mentioned, a highscore list is obligatory for a shooter." 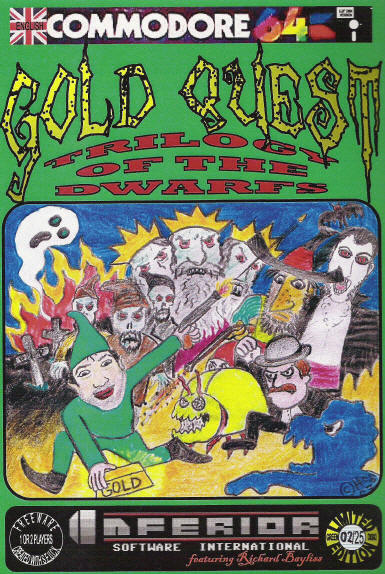 Cover of the collecion Gold Quest - Trilogy of the dwarfs with all parts of the Gold Quest - saga (incl. bilingual instructions).