The player fights as a knight in different dungeons with magical projectiles against the monsters living there. The first monsters ("hellhounds") are still a bit slow. Suddenly appearing monsters get faster and faster and are partially invisible (but can be seen on radar). In later levels the player has to compete against the warlock "Worluk" and finally against the "Wizard of Wor". Furthermore, you have the possibility to fight with two against each other or against the monsters.

All characters in the game are designed fancifully and the screen is well balanced in colour.

There are only a maximum of six monsters and two player figures on the screen at the same time, which adds up to a maximum number of eight sprites. If a monster or a player figure is killed, it vanishes in an energy cloud.

The key RESTORE   restarts the game without setting back the highscore list, the key RUN/STOP   pauses the game until the joystick is moved or the fire button is pressed.

The game is played with joystick in port 1. In the two-player mode with each one joystick in both ports (player 2 = port 2).

The 2-player mode is activated by pressing the fire button on joystick in port 2.

The controls are intuitive, the pawn moves in the direction of the joystick and fires when pressing the fire button.

The entrances/exits on the side teleport the characters to the entrance/exit of the opposite side of the field, but also the monsters, which is especially fatal, if the player is currently standing exactly in front of this entrance/exit.

From a dead Burwor emerges a Garwor and from a Garwor emerges a Thorwor. In the first six levels the number of newly appearing Garwors (and with this Thorwors) corresponds to the level number.

The player who kills the Worluk and/or the Wizard of War will receive "Double Score". They appear when all other monsters of this dungeon haven been killed. If successful, the player gets the double score for each monster shot in the next level.

The Worluk escapes through one of the exits on the side, if he is not shot beforehand. This is not so simple, as the Worluk moves faster than the missiles of the player.

The Wizard of Wor appears at the earliest in the second level. A simple random generator decides if he appears. In average, he appears in one eighth of all possible cases. The Wizard escpaes when he shots the character or touches it.

There are 25 different dungeons, divided into 15 with low, 8 with higher difficulty grade as well as "The Arena" and "The Pit". In levels 1-7 each a random choice out of the 15 easy levels is made, from level 8 on the random generator takes one of the 8 difficult ones. But the same dungeon is not chosen twice consecutively. Exceptions are the special dungeons "Arena" and "The Pit". The first one always appears in the fourth level, "The Pit" in levels 13, 19, 25, 31 and every further sixth level. Starting from level 97 even each second level is played in this dungeon; this stems from the fact that the level counter jumps back again to 97 after level 98. The dungeon "The Pit" has no inner walls so the player has to work fully with speed, lacking any possibility to hide.

Bamse: "Without doubt one of the best & most unnerving CoOp-games on the C64!!"

Sledgie: "The game can well be played alone or with two players. Through the simple game idea and easy controls the players are motivated for a long time. As it is possible in the 2-player mode to fight against each other, the game has an additional incentive. So WoW can be played as deathmatch or cooperatively."

Örg: "A very good highscore'breaking game. The game itself is very simple, but it is lots of fun in multiplayer mode!"

Spaceball: "This game is simple and therefore just great. Easy game principle for full fun. For its time it even has very good graphics and the background melody is nicely monotonous. But it has not that great a cult characters as the monotonous background song of Spy vs. Spy. I can remember having played this game with friends till we dropped."

o.b./TRSi: "An addictive game, just because of the ear-defening sound fx, if you catch the end boss and with this snatch the Double Dungeon Bonus. This evening for a few beers and the -old- WOW? :-)"

Shakermaker303: "What a great class A whopper! The sounds are spacy, a mixture of exploding sound chips and broken hoovers. The fun and motivation factor are very high, with two the game is of course even more fun. You have the option to make "friendly fire", so together as well as against each other. Beware in the cooperation: you can shoot your comrade easily unwillingly. In any case full 10 points from me."

Telespielator: "Extremly successful aracde machine conversion! Simple and clearly-arranged in design, fast and gripping in the course of the game. That's how it should be! This blast offers an especially great portion of oldschool atmosphere. This is created by the unicoloured Hi-Res-sprites, clamant sfx, monotonous background music and the gloomy electro-pathos which is spread by the announcements of the double score dungeons as well as the gloomy Wizard of Wor whose death makes the whole labyrinth quiver. For this game alone it is worth to get a Magic Voice cartridge. Because then it gets really cool, if you are scorned by the Wizard of Wor during the game with a tinny voice! A bloody awesome classic!"

Wizard of Wor is next to Gorf one of the few games, that support the speech output of the Magic Voice cartridge by Commodore. Wizard of Wor expands the vocabulary of the cartridge with some words referring to the game. The following sentences spoken with a tinny computer voice can be heard during the game (if a Magic Voice is plugged in):

The other Wizard of Wor[edit | edit source]

For some of the buyers of a "Wizard of Wor" cartridge a nasty surprise: The Ultimax version. It is a fully different version of the game, which cannot reach the "classic" technically as well as regarding the playability, tension and charme.

The German Minimal/Electro group Welle: Erdball has dedicated the song of the same name on their CD "Ich bin aus Plastik" (I am made of plastic) to the game.

Furthermore, also the German Metal group "Dissonant" has honoured the game in their album "Einst Mensch".
You can listen to it here: lastfm.de (Dissonant - Einst Mensch)
And can be seen here: Video at YouTube 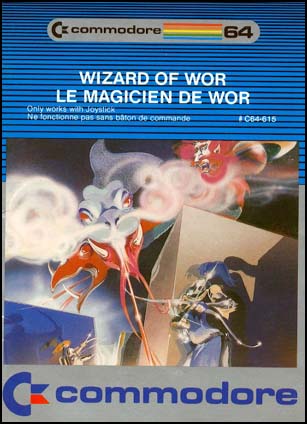 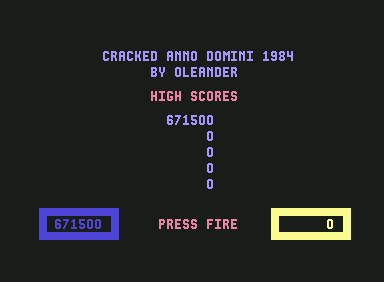