13 years after the classics Turrican 1+2, an inofficial successor of the series has been completed as freeware -- and this game is absolutely worth playing. The game consists of 5 Level, and each level is divided into sublevels, of course with intermediate and end bosses. The first two levels are kept in the traditional Turrican type, so they are both jump'n run levels scrolling into all directions. World 3 is - as in Turrican 2 - a horizontally scrolling spaceship shoot-em-up. Level 4 is a jump'n run, which scrolls only vertically and which requires exactly placed jumps. It is also not possible to turn into a gyroscope here. World 5 is only a vertically scrolling jump'n run and was equipped with moving platforms (so the same as Turrican 2 on the Amiga, on the C64 there was a jetpack!)

The graphics are partially a bit weaker in the jump'n run levels and the sound effects have been left out in favour of the music, but the flying levels are brilliant and the gameplay are on the same level as the forerunners'. By the way, the magazine 64´er wrote 13 years ago, that the team of programmers would have to be sued at the "microprocessor protection court", if Turrican II had had next to the graphics also great music during the whole game. Smash-Designs will probably have to face this charge...

Special for this Turrican are the ingame sounds. And they are really good.
The intermediate sequences before the spaceship levels are a must-see. :))

The hero is steered through 11 levels by joystick in controlport 2 and the keyboard. Turrican has 3 normal weapon systems, the multiple scatter shot, the laser and the bounce shot. These can be activated or upgraded by extras that fly around or are hidden inside bonus blocks. Additionally, there are the bonus weapons. By pressing the fire button (joystick) for a long time, the surround flash is activated and also works in a crouch. The surround flash can be enlarged by picking up extras. With the space key you activate power lines, which are limited but can be filled up with extras. If you pull down the joystick and press the space key, Turrican turns into a wheel and can go on shooting by pressing the joystick fire button. With the CTRL  key the game is paused. 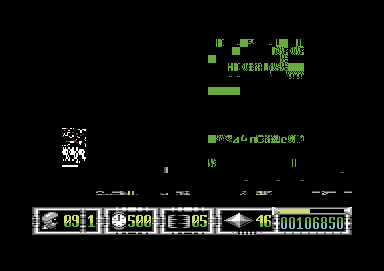 Unfortunately, there are still some bugs in the program. 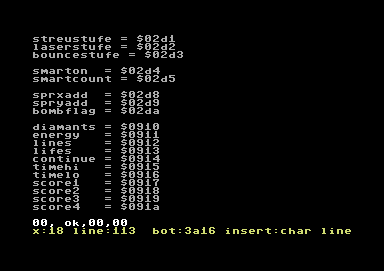 What a pity that AEG hasn't build in a cheat.

(The trainer works only fully until level 2-2 and with end bosses you get energy subtracted. In levels 3-1 to 3-2 you need to press the RESTORE  key to get unlimited lives. Starting from level 3-3 no trainer function works.) 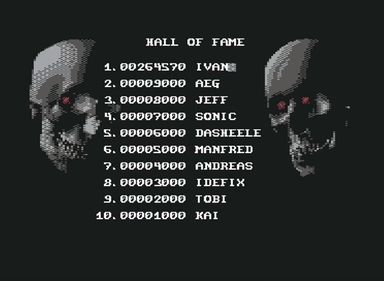