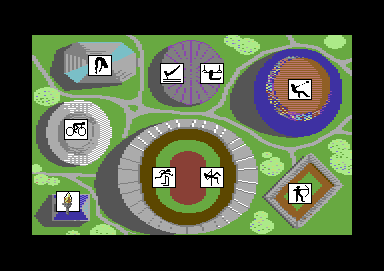 The Games - Summer Edition is the follower of Summer Games II and the last game of the Epyx Games series. Epyx has newly created four events from the forerunners Summer Games I + II and integrated four new events. Together with the two Summer Games titles are The Games a nice collection of olympic events. In contrast to other sports games of this time there was no shaking discipline in this game. For the first time there is also a team mode.

The game is designed for up to 8 players. The players get points for the successful finishing of events. For each gold medal you get 5 points, for each silver medal 3 points and one point for each bronze medal. The player with the most points wins the game.

Epyx has secured a license from the Olympic Commitee of the United States for The Games - Summer Edition and The Games - Winter Edition.

In Archery you need to place an arrow as closely to the centre as possible. The athlete has altogether 90 seconds to fire 3 shots. This is aggravated by the fast change of the wind. You draw the bow and you focus on the target. You should of course not forget about the wind.

Pole Vault is one of the events that were taken over from Summer Games. The course of the event was reworked. The pole jumper needs a high speed, then pushes himself off with the pole to jump over the bar.

Uneven Parallel Bars is one of the most exciting events. Epyx has taken lots of trouble to make this an exciting discipline. The animations are great. With the joystick you steer the woman over both bars and at the end you jump down. This looks very simple, but can easily lead to a fall.

This event from Summer Games II was reworked. The sprint on the rink is simulated, which means that only the last round is stopped. In the single player mode, the player has the red shirt and the red energy bar in the upper half of the screen. The computer has correspondingly the purple shirt.

This event was taken over from Summer Games. You need to do three high-quality jumps from the 1m board.

Each of the single scoring judges pay their attention to one of the categories, jump from the board, height before the combination is started, execution of the combination, smooth dive. This way you can easily reconstruct in which area you have steered imprecisely and can improve this. Judge no. 5 gives the average score of the first four.

In Hurdles you need to cover a distance of 200 meters and jump over hurdles. It is important to jump at the right moment. If you run into a hurdle, the runner will tumble and the race is prematurely over.

In Hammer Throw the athlete needs to throw the hammer as far as possible without crossing the line.

Epyx has made a great effort concerning the graphics to offer a pleasing game. The disciplines that were alreay available in Summer Games or Summer Games II, were completely created anew. The animations of the characters are realised appealingly and very detailled. This game shows the graphical top form of Epyx. At the beginning you are introduced into the game with a nice image show, that also serves as Opening Ceremony. After that you see, as a special delicacy, a rendered sequence. At that time this surely looked very great and especially effective, but from today's point of view of course this is not spectacular any more.

The Epyx programs have immortalized themselves in this game. You need to do the following steps to get the menu item:

This version (see Links - Stadium 64) is the first choice when playing with the emulator.
Setting for VICE: (True Drive Emulation = on; Virtual device traps = off; Video standard = NTSC-M)

saving the highscore lists works, but the program crashes at the end. 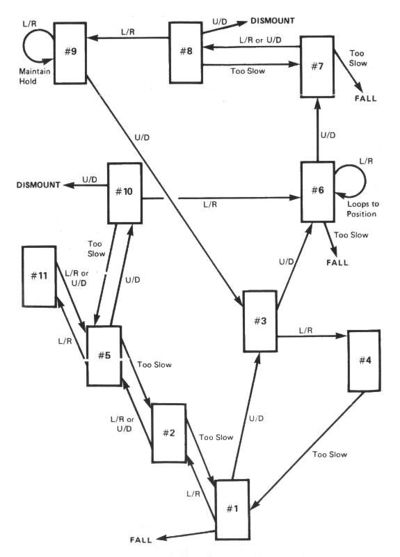 Rings - Difficulty grades
The maximum score of 3.4 for the difficulty is possible if you have at least 2*A, 3*B and 3*C in the exercise.

Cheats or pokes are currently not known.

FXXS: "I have to admit that this is graphically more elaborate that the old Sumer Games and also the controls are partially more thought-through, but this has its price: 3 disk sides that need to be changed and the end sequence cannot be switched off. Concerning the sound, not much has happenend and the Korean atmosphere does absolutely not suit my taste... 7 points from a single player's view."

Werner: "Here my impressions about the single events:

Altogether I like the game a but better than The Games - Winter Edition. 8,5 points! 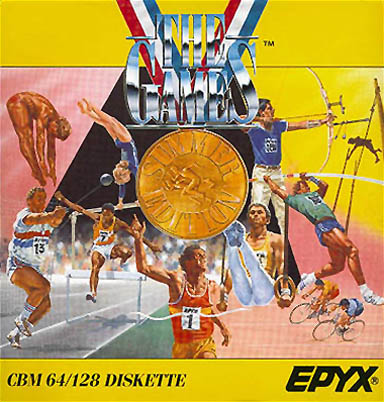