Into the Eagle's Nest

In the fortress "Eagle's Nest" three comrades are held captive. The task of the player is to free them. Furthermore the building needs to be explored and as many stolen treasures as possible need to be found. The main aim of the game is to destroy the fortress. This is reached by activating a detonatorin each floor. Here is is advisable to bring the comrades to safety beforehand. For this you need to escort them to the exit on the first floor. The elevators between the floors can only be used with the help of a keycard that you find in the single floors.

In the game there are eight levels with each special missions. With limited ammunition the player needs to stand his ground against armed guards and always look for supply. Wooden doors can be opened by a shot, for steal doors you need keys. With senseless "shooting around" will not get far. A planned approach is a big advantage in this game. It helps that despite the numerous armed (!) German soldiers in the castle full of ammunition there is not one shot fired at the player. Even better, they queue to die! If you place yourself a bit skillfully, you can defeat one after the other without getting harmed yourself. A bit more effort for the AI would have been good.

Of course there are points for shooting the hostile soldiers, collecting different treasures and - here we have a very questionable feature - the shooting of defenceless, drunken officers that sit at the table and sleep.

2D view from above, on the right side there is the info area with the number of keys, ammunition supply, number of hits you took and the points. In the lowerline messages are shown. (e.g. when collecting keys etc.). The music is fast. The controls easy and quick.

The visual field of the player is very limited, only when you reach the edge, the screen will scroll (it is rather a shifting) a bit further. Here it might have helped to make the allowedly nice big sprites a bit smaller, the more so as a careless shot at a box of explosives means "Game Over".

To control the game plug the joystick in port 2.

Sledgie: "Fast 2D-shooter with strategic elements. The sprites are seen at a view from above, therefore this is noo action shooter game; but rather a bit into the direction of Paradroid. The sound is implemented well. The story is debatable. My overall vote is 9 out of 10 points."

Rockford: "I would rather rank the game close to Gauntlet. To make the mission you need to invest some time. If you then - after two hours of playing - hit a box of explosives by a silly carelessness or an imprecision of the joystick (yes, it is ALWAYS the fault of the joystick!), this can be very, very, veery frustrating. 7 points from me."

Shakermaker303: "Not my cup of tea, but anyway I tried it again and again to reach something in this game. It is quite entertaining and was fun for a certain time. The noises sound fully developed, the graphics are good and the handling is ok. Although this is not really my game environment, I vote 7 out of 10 points for it."

Ludi Purger: "What is there to say about. A simple shooter, with which you have some a good time. Partially, I cannot understand the stir but this should be left to everybody's own discretion. It takes quite a long time to get to the aim and - as my previous speakers already mentioned - this can be very frustrating if you make a mistake just before the end." 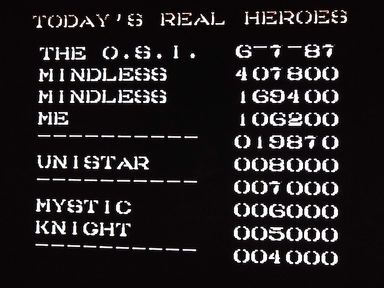