Green Beret is based on the arcade machine by Irem (1980) and by Konami (1985). In the North America the game was also known under the name Rush'n Attack.

The player needs to steer a figure of an American soldier through four levels (Missile, Harbour, Bridge and the Prison Camp) and free prisoners of war. The walking direction is as typical for the genre from left to right and there are two higher platforms that can be reached over ladders. As moves you can lay down on the ground, jump and climb up and down the ladders. On the way to the destination you meet numerous enemies which you are not allowed to touch because you would lose a life. As enemies are constantly coming in from the left and right, you should try to finish the level as soon as possible as the difficulty grade is enormously high. Also, you cannot stay at a place for too long as then a jet appears and bombs you. However, in the level there are further starting points to which you are set back if you lose a life. By this you do not always have to start again from the beginning. Hitting enemies gets you points and after each 25.000 points you get a life.

The graphics are simple but well recognizable. The levels are diversified conerning the design of the background graphics and between the levels there is a short animation in which the hero climbs over a fence and thus gets into the next level.

The sound is kept very simple but fits rather well. There is a longer intro music, an end music and in the game you are accompanied by drum roll in all levels. A level starts with a siren sound and the end boss is announced in the same way.

= lie down, climb down

= lie down, climb down

You can either fight the enemies with a weapon that you have collected (these have mostly only 3 - 4 shots), or you use the knife with which you are equipped.

The enemies can be distinguished due to their colour:

At the end of each level there is an end boss which needs to be destroyed before you can go on. It is announced by a siren signal after arriving at the end of the level.

You run through a military base in which tanks and trucks loaded with missiles are standing. At the end there is a launching platform for 3 missiles, here you meet the end boss. In the level you find white enemies which drop a flame thrower at three locations. As end boss you get a truck driving towards you out of which several waves of brown and green enemies emerge. You cannot move your figure fully to the right border of the screen, you should stand approx. on the level of the missile in the middle and wait for the waves.

Tip: Position yourself in the middle, walk a bit towards the wave, lie down and only take care of the brown enemies if they are led by a green enemy with a bit of space. The green jumps over you then. Before the end boss there is one more flame thrower which you should keep for the other waves (e.g. two greens or one green at the same place with a brown).

In this level you walk through a harbour in which containers and tanks are placed and submarines are anchored. Here also green enemies come down with parachutes in beetween. In this level the white enemy drops the Bazooka. As end boss the green enemies with dogs approach from left and right.

Tip: stay lying in the middle and use the knife.

This level reminds of an airport, because you can see parts of airplanes behind walls. In this level you find hand grenades at the white enemy.

As end boss you face several helicopters which you best defeat with the Bazooka.

To defeat the enemies at the end you have to walk between the left and right side two and fro. The only peril comes from the brown enemies, but if you do it skillfully, you can make it.

After this end boss the prisoners are free, as accompanying music you hear shortly the national anthem of the USA and with "Proceed to next camp" the game starts anew.

Mark: The game is simply built, but due to the difficulty grade and the high speed it fascinates rather much. Unfortunately, you lose your lives rather fast through small unfair things, e.g. you can hardly guess when the blue enemies will shoot and then you can hardly avoid the missiles. Most of the time this happens 2 cm in front of the pawn, so that you just have no chance. Another nuisance is that you can hit the enemy while standing, but as soon as you lie down the knife is behind the enemy so you cannot hit him and are touched by him. These things quickly drive you up the wall, but you should have seen the game at least once.

Jodigi: The game is not really easy to play. I only made it to the 3rd level. As I am not made for this type of shooters, I have left it at that after a few tries...

Robotron2084: Technically this game is top - as so many by Imagine - and this one I think is even better than the arcade version. But the difficulty grade is as already mentioned really monstrous, as you are continously supplied with a true avalanche of enemies. However tiny the mistake, it leads to losing a life so that you have to act with machine-like precision, which really stops the fun. Permanent stress and uttermost concentration are required here. In other respects, I can recommend the game without reproach. 8.5 out of 10 points.

qdiace: There are a lot of game mistakes, e.g., the mines don't hurt the enemies, only you. These mistakes make the already difficult game more-more difficult. If you can play it to the end without any cheat, I think, you really deserve to wear the Green Beret. However, it's not that believable that a Green Beret goes to mission armed with a knife only... 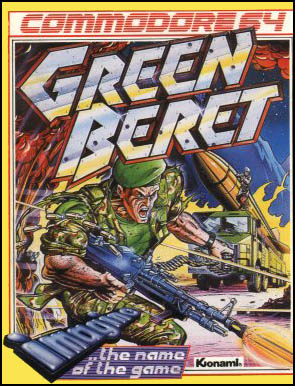 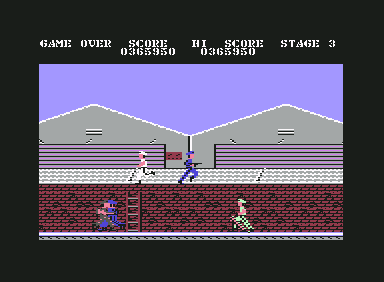