Grand Monster Slam, which was only available for home computers, seems to be heavily based on the arcade game Penguin Wars from 1985 which was made by the Japanse company UPL (Universal Entertainment Corporation). 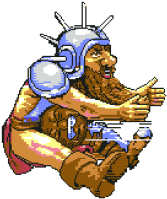 It all started with the "Big Embarrassment" for the Goblins in the war against the humans. During an attempt to lay siege to a desert fort of the humans, they didn't think of the fact that in the desert only few stones are available for their catapult and so their attack had failed after only 5 minutes. But the Goblins were so enraged by the laughter, so they decided to storm the fort, which was repelled by the humans by letting lots of stones rain on the Goblins...

With this the war could have ended, but instead the Goblins took the stones, which they got back while receiving lots of bruises, to shoot back at the fort. With the same result as the first time... ...This went on for three years, until the tired parties could bring themselves to make a peace treaty. In memorance, they then met every 3 years for a big celebration, where honourable catapult shots were exchanged.

The other peoples also liked this peace celebration and wanted to join in the shooting of catapults. Therefore the Halflings declared war to the Goblins and the humans and symbolically threw cobblestones at them and surrendered after 5 minutes...

This was also done by the other peoples and after that it was time for a new program of this party. It was only named "Grand Slam" anyway and after some incidents there were the final rules for the Grand Monster Slams:

Instead of shooting at each other with catapults, only the best of each race compete to shoot all Beloms to the opposing side. Subsequently the competition is won by doing a homerun to the opposing side. This had the advantage for everyone, that it meant lying on the floor only for a short time after being hit without suffering bigger injuries. Except the Beloms of course... ...These demanded in return the intermediate round, where they tried to bring about the winner of each round's downfall by tickle attacks. Each winner has only a pole to keep the Beloms away temporarily...

If you have won all three duels of a league, you need to proove your accuracy by shooting the Beloms into the mouths of the six Faultons. These are not allowed any more in the regular game, as they had the silly habit to eat all Beloms instead of shooting them back. But don't worry, all swallowed Beloms are spitted out again after this intermezzo. At least this was secured by the Faultons.

The graphics are painted and animated lovingly, the game fields are static. The sound is realistic during the rounds, the title melody gets you into the game. The opponents have different strenghts and weaknesses, to which you as player need to adapt to win the game.

In the main menu you can choose the current "Hall of Fame" to look at the highscores. With "Faulton feeding" and "Revenge of the Beloms" you can train the intermediate games. "Grand Monster Slam Main Tournament" starts the main game.

The cassette version of Grand Monster Slam is compared to the diskette version highly limited, as the opponents in the first two leagues are not chosen randomly - so you always get allocated the same three of the seven displayed opponents when repeating the game. 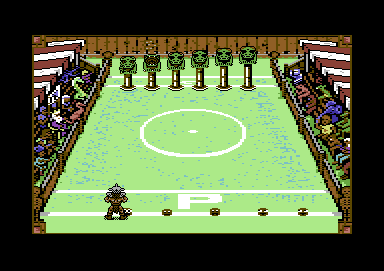 The aim is to shoot all Beloms (furry ball creatures) to the opposing side. If the opponent or you are hit, this leads to a short unconsciousness, which lasts longer the more often you are hit.

The Belom which will attack next, shakes shortly before its attack, which gives you the chance to align the pole in the right position. Starting from the main position you can defend six attack directions. A changing of the position is only necessary for an attack from the side.

The six Faultons are on pedestals of different heights and each need to be hit with one Belom.

Tips and other information[edit]

At first sight in Grand Monster Slam it is your thrust to hit the enemy as often as possible without getting hit yourself. But there are other tips, which can facilitate your live as a fighting dwarf:

How fast you can shoot depends mainly on the paths you take. If you have just avoided a Belom, this one is quickest to reach. If many Beloms wait on your side to occupy the Belom points, you should do a row shot: place yourself on a Belom point and press quickly the fire button in succession. The waiting Beloms occupy the Belom points, only to be sent directly to the opposing side.

Exact aiming gives you time advantage. Either the opponent needs to dodge (therefore loses time and maybe lets himself be cornered) or he will be hit by the Belom (he stays down on the ground). The more often an enemy is hit, the longer he stays down. Use the time! If you can aim well and have the right timing, you should be able to hit the opponent once again when it gets up.

If you can shoot exactly, you should try to hit the enemy at the height of the head. Those hits tire the enemy more than hits at the foot. Every enemy has difficulties to avoid flat shot Beloms which have bounced from the bank.

Whenever you have the time, you should do the "annoyance gesture" (joystick downwards and fire). You might not notice it right away, but the enemy gets more and more nervous through this. When the enemy loses it's temper and shoots at the grand-stand, you reach a Pelvans. If you convert the Pelvans freekick, has 3 Beloms less at one go. That is already half the victory!

It is recommended to keep moving all the time. Some enemies have difficulties to take the movements of the dwarf into account while aiming. A frequent changing of the direction can confuse the enemy.

Tips for the higher leagues[edit]

Some opponents have weaknesses, which you can use:

Characteristics of the opponents of the 3rd league[edit]

Characteristics of the opponents of the 2nd league[edit]

Characteristics of the opponents of the 1st league[edit]

All oppnents in this round are so strong that you cannot win against them quickly. You need to play them out, do net let yourself get hit and wait for the right occasion.

As beginner you should not confuse yourself, that you jump into all four positions with the dwarf. Only from two positions (e.g.: "dwarf looks to the left" and "dwarf looks upwards") you can get hold of all approaching Beloms. For each of the eight directions there is only one joystick movement that you need to learn. If you have the possibilityr, you should play with the keyboard, as the right/left movement is better to distinguish from the punching.

As the timing needs to be kept very precisely in this interlude to get the Belom transported into the mouth of the Faulton, you should act in accordance with the up and down movements of the Beloms:

FXXS: "An inventive "sports game" which needs tactics and skills. Due to the KO mode and the many loading times is the frustration potential very high. Therefore "only" good 8 points."

Robotron2084: "Then, as now, there are only three adjectives that come to my mind when thinking about this game: fancy, monotonous and frustrating. Fascinated by the really convincing presentation of this game at the beginning, this changed more and more towards being bugged after playing for about a dozen times. Liveliness is missing in this game, the constant kicking seems more like working on an assembly line, the fun factor is deifnitely not high enough, this can't be helped by the mini games either. In one sentence: I didn't like this pseudo sports game with all its graphical and sound technical gibberish at all: 4 out of 10 points."

TheRyk: "Concering what a pity, that there is no multiplayer mode: the game would then have been able to unfold a lot more potential. Exclusively sitting in front of the box during the long loading times and then finally just doing monotonous activities, will just get boring some time. Can be played occasionally, it is entertaining through the funny graphics and the successful sound, but unfortunately just for a limited short while. For me it is worth a tight 6 out of 10."

In the sequel "M.U.D.S. - Mean Ugly Dirty Sports", you take over the role of a coach in a monster soccer team. The programmer Teut Weidemann was involved in this project, unfortunately there is no C64 conversion of this humorous game. 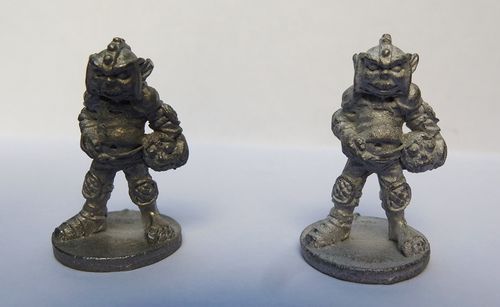 As a goodie there were two goblin tin soldiers in the box. 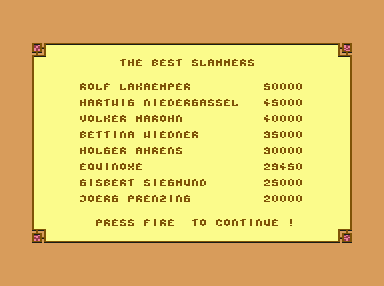