From C64-Wiki
(Redirected from Denaris)
Jump to navigationJump to search

Katakis is the story of the planet with the same name. It was once a booming paradise for researchers, scientists and inventors. But always have the humans been the victim of their own intelligence. So the inhabitants of Katakis created fantastic machines, that should facilitate life. But the technical wonders developed their own life and devastated the planet.

Now you are called upon to end this going-on. With a DS-H75 Eaglefighter, which can be upgraded with a satellite and different extra weapons, you try to get into the centre of the machine town and to destroy the mechanical enemies.

You control this spacehip through altogether 12 levels, whereby at the end of each level a huge end boss waits for you to be defeated. Collisions with asteroids, flying enemies, ground troups and the background need to be avoided.

In the title screen you see in turns the highscore list and an options menu, in which you can choose the following:

2D screen with its background scrolling from right to left. The spacehsip can be moved freely into all directions in the screen. At the end of each of the 12 levels a huge end boss must be defeated. Each level has its own design. Enemies fly mostly in straight lines. Unfortunately, there are many bugs in the display, e.g. sometimes shots keep "stuck" or colour mistakes happen. The tiling of the sprites or charsets that were used for the graphics is relatively distinct.

Upgrading the Eagle-fighters is mainly done by shooting the space containers and picking up the so-called Geega-crystals that are left and collecting the multi-coloured balls that appear after shooting whole formations of enemies.


- The number of the collected balls is shown at the lower rim of the screen (red = shooting power, green = missiles, blue = shield).
- When the display is full, the corresponding option is improved, (e.g. red display full - shooting power is upgraded).
- If the fighter gets destroyed, you lose the displayed balls.

The enemies and end bosses of each level always react in the same way, i.e. you can remember the formations and movements and master each oh so tricky passage in the game sooner or later (mostly later). The end bosses react especially sensitive to a certain weapon type (find out for yourself).

If you reach a high enough score, you can enter your name into a highscore list, which comprises ten entries and can also be saved on disk. For this you type your name over the keyboard and confirm it by pressing the "RETURN" key. After that you are asked, if the list should be saved on disk. Press the key "F1" so save the list on disk, but
CAUTION !! If Jiffy-Dos (or another disk drive speeder) is active and shall speed up a drive which is connected to the serial bus, you need to switch off this speeder before saving (due to the switched on sprites) and switch it on again after saving.

Stay in the middle of the screen and fire. After the last peak steer full down and destroy the tank at the ground. Before the next mountain peak hold fully to the upper right (due to the tank). Notice the shooting order of the next tank (3 shots, then a short break). During the break you have time to pass it. The second part of the level is done.

The end boss enters the screen from the right. He has to be hit a bit above the eyes (about 8x with the Celest-satellite, if you shoot normal) so he will resolve in an explosion. The first of twelve levels is done.

At the start stay low as far as possible and shoot the three machines walking on the ground. (These machines have a diagonly shot and hit rather precise, therefore they are utterly dangerous. They can be found in the whole level.) Shoot the containter, it has a blue Geega-crystal. Pick it up and you have gyroscopic mines. (They are indispensable for this level.) Beware of the machines walking on the ground towards you. In front of the part, that looks like a drive gear nozzle, there are three machines on the ground which lift off when the glider comes near and fly towards it very fast. After the nozzle follows a formation, which is easy to shoot. But after the next elevation there are again machines that walk on the ground and shoot diagonally up. Without gyroscopic mines this section is almost unsolvable. Now keep to the middle of the screen. When the drive gear nozzles get visible at the upper and lower rim of the screen, the first part of the level is finished.

Keep to the middle of the screen and fly between the drive gears. Watch out for the small yellow cannonry, which are at the upper and lower rim of the screen. The following passages are very narrow, you need to steer the glider very exact and fire permanently. Do net let yourself get irritated by the approaching formations. Take care of the machines on the ground again. When entering the hall, the second part is done.

The end boss enters the screen from the right again, stays a while at this place and then moves a bit to the left and so on. So you should not need too much time to destroy it. It needs to get hit directly into the mouth. After about eight fully loaded super shots it resolves into its parts in an explosion. (You should only use super shots, as it is relatively immune against the others and you need to much time!) The second of twelve levels is finished.

Werner: Ingenious shooter with great graphics and sound. (10 points from me)

FXXS: " Outstanding shooter for ambitioned players. Difficulty grade is very high at the beginning, due to the small room to manoeuvre between the meteors. What a pity that there "get ready" after loading is so short or respectively that you cannot start each life by pressing "fire". Music is top and the graphics are not half bad, therefore 9 out of 10 points."

Logan: "Super sound, very diverse graphics, good level design and very hard to play through. Unfortunately, the game has a few bugs and is by this at some places unplayable (if the bug appears)."

Robotron2084: "Flickering graphics, disappearing shots and the most boring end fights ever. So, Katakis is not really a striking solution of simplicity... but 7.5 points can be justified."

1570: "Design and Musik are very good, gameplay can be improved. You mostly push the satellite in front of you. For the end bosses it is most of the time enough to find the right position and keep on shooting. The game is only difficult, because there are many places where only luck (or a blue ball...) can help. If there is none and you maybe also get a bug, then you lose all lives very fast, as you re-enter without extras. Concerning the playability, e.g. Armalyte is definitely superior. But the music in Katakis is so good, that you have to play it every now and then."

Shakermaker303: "I found Katakis as the best shooter game of its type. Great music, good graphics (+ design) and plenty of action make this shooter perfect for me. You find into the game quickly and it had for me this factor of delight which makes an addictive game. For some it might be too "simple", but just the same I advocate the highest points of 10."

GMBigB: "Outstanding graphics and next to Metal Warrior 4 the C64 game with the best sound. But a bit too hard for my taste. There is often only one way to make a level and the setting down at the start or the middle of the level removes the motivation fast. So it is not enough for more than 8 points."

H.T.W: "After having played through the game for what felt like 50 times with different versions (incl. original versions), I also have to add my opinion here:
Flickering graphics are only found in different crack versions, in the original version nothing (or not much) flickers.
Crashes are also only in different cracks, the original versions played with C64 and 1541-II do not crash.
The level-4-chip-bug happens only seldom in the original version and if it does, then only if you do not make the place in the middle of the level 2x in succession or are shot more than 2x by the end boss. In fact, this bug is no problem, as after 10x trying you will always make this level in one go.
The only proper bug is the faulty display in the status line for player 2 in the 2-player-mode (in turns) and the fact that in this mode the second player cannot enter the highscore list. And of course the limitation of the highscore list to 6 digits, it can flow over and start again at zero.
Now the game itself: The graphics and music are very nice although you partially see that the background consists of charsets and the music gets a bit slower when there are many sprites on the screen. For me, the difficulty grade is quite right, by now I can play it to the end without cheat. All in all a very good horizontal shooter and the rumours about crashes and flickering may be caused by bad cracks and the fact that inserting trainer (pokes) usually results in a changed timing and in this game a few loops more or less can show unforeseen results.

KEULE: "For me personally the best shooter at the C64: great graphics, great music, neat extra weapon system, outstanding playbility. Only R-Type can maybe keep up with that... from ne 10 points."

These bugs concern all known versions (also the original)
1st The display for player 2 is wrong (number of ships, etc.)
2nd Player 2 cannot enter the highscore list
3rd In some cases which are not traceable, the game even crashes in the 2-player mode

Due to legal problems the game was sold under the name Denaris in some countries. Except for parts of the graphics (e.g. title screen, pod sprite, colours in level 2) Denaris is identical to Katakis. More infos at schnittberichte.com

Smash Designs published a clone of Katakis under the name Crush (Katakis 2).

In 1992, an inofficial successor of Katakis was released under the name "Enforcer".

The end bosses are put together by several sprites (divided by raster interrupts). The many different background graphics were drawn in the paint program Paint Magic and put together with special tools to form the levels. The same was done with the sprites, whereby a grabber was used to cut out the sprites from the HiRes images. Small corrections were done in a sprite editor. The named tools are also known as "Katakis development system" and were provided by Manfred Trenz for publication in the" 64'er-Top-Spiele-Heft 2" (diskette

The basics of the program were also used with different graphics (level) and music in R-Type according to Manfred Trenz. This was one reason for the short development time. (see also thread in Forum 64 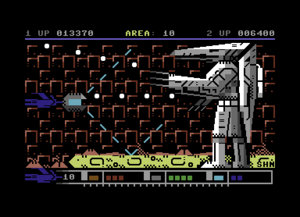