Enforcer, which is also named Katakis 2, is another horizontally scrolling space shooter by Manfred Trenz, which he wrote for the Golden Disk under the alias "The Master". You fly with an orbital glider through 6 different zones with rising difficulty level and each one big enemy at the end.

The Enforcer-Fullmetal-Megablast is a battle glider, state-of-the-art. In the basic equipment it has a high performance pulse energy engine and a plasma rapid fire blaster. Moreover the EFM possesses a power beam, whose fire power is enough to desintegrate heavy armoured and big enemies.

The EFM can versatilely be expanded and upgraded, by adding several modules, that appear in the course of the game. At the beginning four gliders are available, each of them is equipped with 3 smart bombs. In every zone further extra gliders are hidden, which only catch your eye when looking closely. By touching them they are added to your account.

When all gliders have been destroyed, the game is over. Provided that you have reached a highscore with your mission, you can enter you name into a list, which will be immortalised on disk.

The levels are diversified, have nice graphics, well animated enemies and scroll smoothly. The sound is also well done. The boss enemy in level 6 reminds a bit of the intermediate enemy of Turrican level 4-3.

The extra symbols and their meaning:

In the display at the lower screen border the following information can be seen (from left to right):

The pause function of the CONTROL key can be cancelled by the fire button of the joystick. If you keep pressed the CONTROL key constantly, e.g. by putting something on it, and if you use a joystick with permanent fire, you will have a kind of "slow motion mode" with which hard parts can be made more easily.

Else there are no official cheats. The pokes need to be entered with the help of a Freezer such as the Action Replay. To avoid the crash of the loading system, you first have to loose all lives in the first level, enter your score into the highscore list and save. Now the loading system is not active and you can enter the pokes.

The ones who find this too laborious have to get a crack version (see Miscellaneous).

Logan: "The game has an excellent graphic and the sound is awesome. It's a pity there are only 6 levels and the intro is graphically not very spectacular."

H.T.W: "Graphically and programmatically probably one of the best horizontally scrolling space shooters for the C64 with interesting possiblites to upgrade the glider, hordes of detailed enemies, driving background music, good FX and even a highscore list that is saved on disk. But there is also something negative to mention: unfortunately, the gameplay is not as balanced as it is in Katakis or even Turrican. It is partially too bustling. And six levels are just too little...".

tilobyte: "The by far best space shooter in the style of the flying levels of Turrican 2 with a rare good playability and very balanced difficulty grade. Despite relatively few levels I am busy for a longer time and it belongs to the few that I like taking out every now and then."

There are the following cracks: 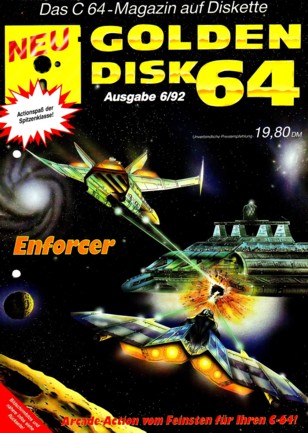 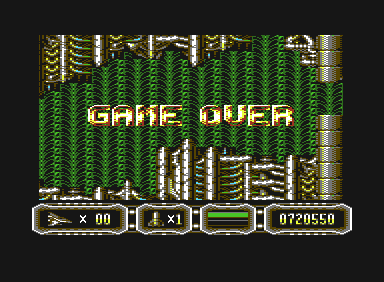