Around 30 years after the publishing of the Kung-Fu action game Bruce Lee, a few programmers developed an unofficial follow-up called Bruce Lee II as a fan project.

In 2013, the programmer Bruno R. Marcos developed the game Bruce Lee II for PC (Windows and Linux) with a C64 and an Amstrad CPC graphic mode and sound from the original Bruce Lee game.[1]

In April 2014, a conversion of Bruno's Bruce Lee II for the C64 was started by by Jonas Hultén. The C64 version was finished around a year later. It exists in several versions. The first release has the version number V.18. All other following releases have the version number V.19. The V.19 releases fixed bugs and other problems.[2]

Also there are four versions of Bruce Lee II: for the floppys 1541 and 1581 as disk image D64 and D81, as image for the EasyFlash cartridge and for the Magic Desk cartridge. 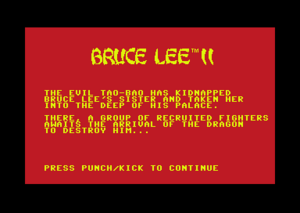 The intro of the game Bruce Lee II...

Bruce's sister has been kidnapped by the evil sorcerer, Tao-Bao, and imprisoned in his massive palace. As Bruce infiltrates the large fortress, he will encounter numerous traps while constantly being targeted by Tao-Bao's henchmen.

In order to proceed deeper into Tao-Bao's lair, Bruce must collect lanterns and pull switches to open doors. Bruce can run, jump, climb, fight with punches and flying kicks, and swim to make his way through the numerous hazards and opponents that block his path. 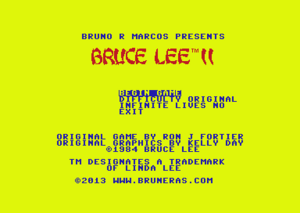 The option menu in the title screen.

In the game title is this option menu:

A player can play this game a joystick in port 1 or 2 and also with the keyboard.

The C64 conversion has an option for infinite lives integrated.

There is no score and no high score list.