The game sequel Bruce Lee - Return Of Fury is based on the 35-year-old original Bruce Lee game by Datasoft from 1984. The game features of the classic game were taken over and integrated into a new game world by the Megastyle group as part of a Fan Project. Bruce Lee's old arch-enemies, the sumo wrestler Yamo and the ninja, are also back and constantly hinder Bruce Lee from successfully completing his mission.

Bruce Lee - Return Of Fury can be played with up to 3 players simultaneously using Protovision's 4 player joystick adapter. The game has been released as a disk and cartridge version as a free download in early March 2019, and can also be played in the C64-emulator.

Welcome to BRUCE LEE - RETURN OF FURY. 35 years later, the Conqueror has rebuilt his Forbidden World. The enemies have also reassembled and are coming back stronger than ever. There is no way out of not accepting this challenge. "Be like water, my friend, and you will conquer". The legend is back - the adventure continues...[1]

The game graphics are not that colorful, but appealingly designed. There are slight animations, for example in traps. The sprites are animated smoothly. Snappy music in the loading screen, which is ingeniously designed, and title screen, as well as in demo mode. After the game starts, there are only sounds while running, climbing and fighting
The line above the game screen indicates (from left to right): The current score of the current player, the current top score achieved, and the number of lives (Falls). 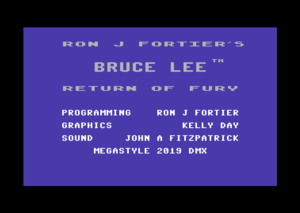 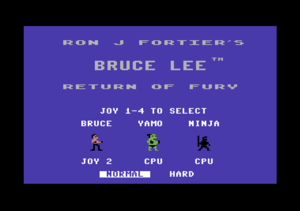 The game modes and players.

Jodigi: "The first game impression is very good. Some screens require a bit of thought to pass..."

Also in the same year from the same group the "Bruce Lee - Duology" was published, which unites the two games Bruce Lee and Bruce Lee - Return of Fury as a .D64 and cartridge image.
. Here you can select title menu the following games:

Furthermore in the same year the group Excess released the "Bruce Lee - Triology" as an EasyFlash image, which even includes the unofficial sequel Bruce Lee II. All games have been supplemented with trainer. Here one can select title menu the following games and/or program points: 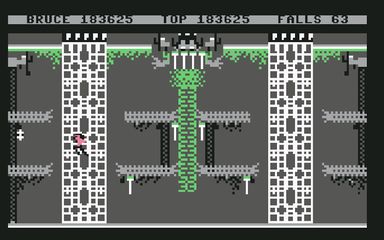