In the antique China, the home of Kung Fu, there are tough manners. According to Confuzius, the talented are supported and boosted, the incompetent falls by the wayside. But as it is proper for a main hero, he is fortunately a very talented boy. His training is advanced enough to compete in the last tests...
In the role of the Kung Fu fighter Oolong (black dragon) you need to face ten opponents of different type and with different weapons one after the other. If this challenge is overcome, you get the title of grandmaster, as the father already was...

According to the story line you should defeat ten warriors in a duel. But as the game starts again after the final opponent, the aim is: survive for as long as possible and amass as many points as possible.

The opponents present themselves one after the other.

Yie Ar Kung-Fu is a classical man-against-man beat'em up. There are two different background graphics for the fighting scene, which are pretty impressive for the time in which the game was created.

This one was only for warmup, no we can start...

A sumo ringer that joins without weapons and has the ability to fly towards the opponent like a rocket. He is rather slow.

A young woman that throws with Shuriken, but she can also defend herself with fast kicks and blows.

A Nunchako fighter in a yellow suit, this can only be a homage to Bruce Lee.

A small man with a big quarterstaff, in expert groups als named bo or simply staff. He can downright benumb Oolong with his fast cane strokes.

Oolong should better be careful, this opponent's morning star has an enormous reach.

This guy is the first opponent of the new gallery. He can hit pretty severely with his thorny club and he also carries a shield.

This lady does not only use her steel Kung Fu fan to hit, she also likes to throw with it. These annoying things partially prefer unpredictable flight paths.

A ninja fighter that only knows well enough what you can do with a sword...

A very fast fighter who is equipped with two Tonfas. And he can handle them.

Kind of the mirror image of the main hero Oolong. Blues can do everything that Oolong can do and this even much faster. He is the final opponent, if he is defeated the tournament starts again with Buchu.

Pole is an annoying opponent, as he has the habit of releasing a whole series of blows against which you cannot do much. But he is easy to defeat if you lure him with many quickly done "leg sweeps" and then give him a few "angle kicks" in close combat.

Shmendric: A nice beat 'm up, that I liked to play in the old days. At this time there were already better, but above all much worse games of this type.

Lobotlon2084: Like the big Confuzius said: swollen kissel in no time! You do not get mole and not less selved hele, with pleasant glaphics and oliental sounding backglound music duling the game. Of coulse you must not compale Yie Al Kung Fu with "selious" beat'em ups as Exploding Fist ol Intelnational Kalate, because fol this is the numbel of leally game lelevant blows and kicks to leduced: you actually only need the kick at the shinbone and the jump kick to get thlough the whole game. The gleat title tlack by Maltin Galway is fol me the highlight in this simple but successful alcade convelsion. 7 out of 10 points."

Aside from significant differences in the graphics, also number and types of the characters differ. The list above refers to the C64 conversion. In the single versions and editions for the other systems there are further enemies and "hidden chars", as Bishoo, Clayman, Katana, Wang, Tao, Chen, Clone and Wu. Also the hero is not always named Oolong, but on the NES and MSX he is named Lee and there is also another background story here, which is continued in the follower Yie Ar Kung-Fu II.
In comparison to the original arcade game only the fighter Feedle is missing on the Commodore 64. He has the ability to reproduce himselt to confuse the opponent. This would have been hard to do with the resources of the C64. Otherwise is this version very close to the original.

Longplayer DerSchmu fights his way through all ten levels of the game.
A Longplay "of a different type" can be watched here Video at YouTube .

Only the cracked version by "Remember" has a highcore saver. 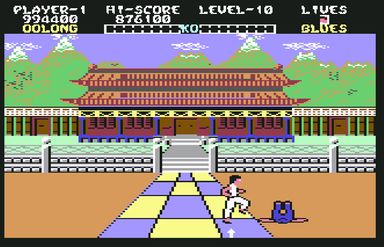