Ultima IV – Quest of the Avatar

Ultima IV - Quest of the Avatar is the fourth part of the Ultima series.

Some time has passed since the Stranger from another world managed to defeat the evil Mondain and his followers. But again it was not granted to the mysterious land under the rule of Lord British to find peace. Although no super-villain threatens the realm this time, the evil is lurking everywhere.

And what is the story about the mysterious Codex of Ultimate Wisdom?

In the fourth part of the Ultima series, the player needs to first endure a kind of medical-psychological examination and for this answer some questions to a gypsy. From this the character values are generated, which for the first time in the series cannot be allocated by the player. Ultima IV offers an upper world of enormous size in which Avatar and his troupe, as usual from the bird's view, can walk around. The game world is in comparison to part three approx. sixteen times bigger. Ghost towns, captive balloons and pirate ships are examples for the diversified design of Britannia. What was especially improved, is the communication with the NPCs, which now seems significantly more lively and coherent.

The runes of Britannia

Following an old tradition handed down from generation to generation, many signs and signposts in Britannia are written in unique and fascinating runes which were once used by druids for their notations. According to a study, these runes are older than Britannia itself. The superficial wanderer might be confused by this writing, but the clever traveller will not spare any effort to study this writing intently.

The aim of the game[edit | edit source]

The aim of the game consists of two parts. The first partial aim is to become an 8-Part Avatar. To reach this, you need to act all your life (in the game) in pursuance of the eight virtues of the Avatar. These eight virtues are Honesty, Compassion, Valor, Justice, Sacrifice, Honor, Spirituality and Humility. For each virtue there is an epiphany, which you get, when you have acted in your life along one of the virtues for long enough. When you have the epiphanies in all eight virtues, you are Avatar and have reached the first partial aim.

The second partial aim is directly connected to the first one: As Avatar you need to enter the last haven of evil in Britannia, the Great Stygian Abyss, find in it the Chamber of the Codex of Ultimate Wisdom and enter it. When you have received the last enlightenment from the Codex, the game is solved.

At the start of the game you need to answer seven questions with the choice of a virtue. Depending on the answer, there is a bonus on the each 15 points for INTelligence, DEXterity and STRength. At the same time, the two most used answers determine the final questions and the answer to that then determines the profession and the hometown of the created character who then takes the role of the companion in that town. In the further course of the game you then collect the companions from the other towns. The Bard starts as the only one with a long range weapon.

The only person who can tell you about the progress you made at each virtue is the seer in Lord British's castle. He also gives the permission to get the enlightenment for each virtue, when you are ready. For each virtue there are rules in behaviour to which you strictly have to adhere to make progress.

After having received the permission from the seer to get an enlightenment, you need to visit the shrine that belongs to the corresponding virtue and meditate for three cycles. To be able to enter a shrine and meditate there you need two things: first the rune. It is needed to be able the enter the shrine in the first place. Then the mantra. This is a syllable or a word with which you can collect your thoughts and concentrate. Each shrine has its own mantra and its own rune. You will get to know the mantras through talking to people, the runes need to be found with the help of the search command.

The moongate system is rather easy to understand: The first moon, Trammel, shows the gate that is currently active. The second moon, Felluca, shows the destination gate. Due to the different moon phases only certain combinations are possible. If used correctly, the moongates spare you a lot of walking and facilitate the game significantly. From the listed places you get to the destinations as below:

Example: To get teleported from Trinsic to Britain, the following constellation must appear:

For each of the eight avatar virtues there is a coloured stone. Six of these stones can be found in several dungeons, the rest at two other places.

For these you need to go to the dungeon Hythloth! In the eighth level there are three chancels, where the stones need to be used in their order within the principles to get the key parts. The following altars have the following combinations:

You can only get the sextant, when you ask the thieves for item "D", which is not on the list. This little helper is an absolute must in Britannia, because it gives the corresponding location of the user in latitude and longitude.
Britannia is divided into 16 x 16 big blocks, which are again divided into 16 x 16 small fields.
Example: Lat. D' L'', Long. M' J'', short "DLMJ" or DL MJ means, that you are in the map block on D latitude and M longitude and within this block in the field on L latitude and J longitude (in Vesper).

Map of Britannia without labels.

Map of Britannia without labels and legend

Map of Britannia with all the town names: 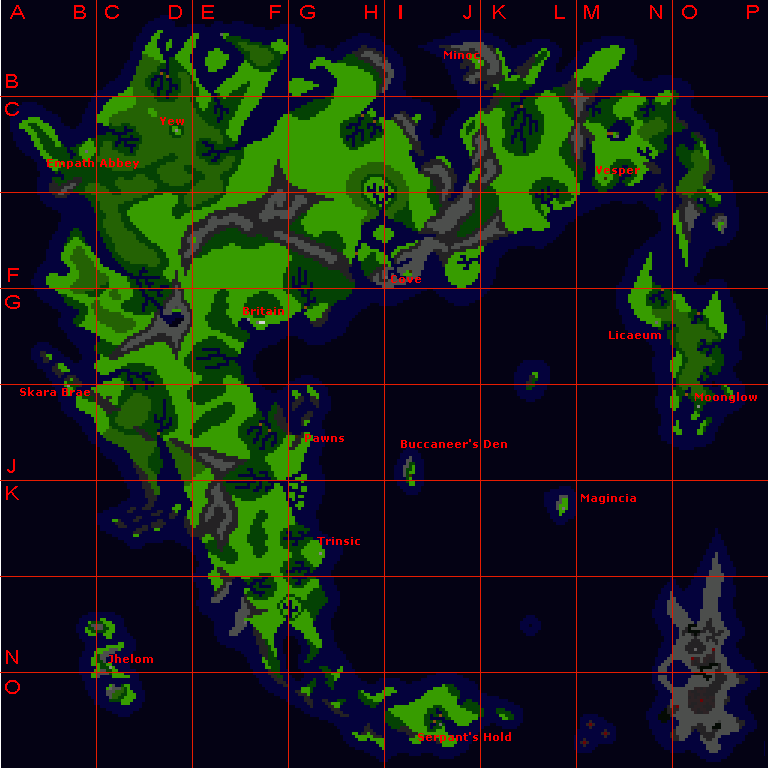 Map of the dungeons[edit | edit source]

You find a map of the dungeons here: Ultima IV – Quest of the Avatar - dungeon maps

Cheap food is available in Skara Brae, Hanse-players and pirates surely would love to do ocean-going trade between Paws and Buccaneer's Den, but disappointingly they had to find out that the herb woman does not buy anything.... Furthermore, you need to be aware that you need to own at least one Black Pearl already to be able to enter the herb shop in Buccaneer's Den with the spell "Dispel".

Magic is extremely useful when you use it the right way. In Paws, Moonglow, Skara Brae and Buccaneer's Den you can buy six of the eight types of reagents. But you need to search for the two last ones, because they are very rare. You can find them here:
nightshade: JF CO in Spiritwood, CM MN north of the Shrine of Sacrifice
mandrake root: DG LG in the moor of the Bloody Plains, KF GE on an island of the Fens of Death
The plants can only be found at double new moon - and please stay away from the place for a while before you can harvest again.
The spells and their effects:

Only the first four letters of a phrase need to be given, the program does not check for more letters. Basically, you should be modest and never answer that you know everything or even that you are proud to be an Avatar...

In each town (not in villages or castles!) you find exactly one character that is going to join the party, when the leader has reached the corresponding level (exception: the town to which the own character belongs). When you enlarge the group this should not happen without a plan. Weak characters as e.g. the shepherd should be taken into the group at the very end. If you start with a paladin, you basically have reached the 3rd level, which means that you can instantly add two new characters to the party. Recommendation: a bard and a druid or a mage. Then you should get the tinker, ranger and last the fighter and the shepherd. It is important that at the very end you have all 8 characters when you enter the Great Stygian Abyss.

You know the way to the island, it is where the Shrine of Humility is. First you go into the direction of the Shrine and go around the island on the left. On the westersn side you find an entrance that leads to a big bay in the middle of the island. Before using this entrance you need to use the magic wheel! After some fights against pirates you land in the east of the bay, follow the swamps further to the east and then turn to the south. You see a net-like structure made of fire with an orange-coloured lava field in the middle. This field is the entrance to the Great Stygian Abyss. Now you enter the lava field.
Now use the Bell of Courage, the Book of Truth, the Candle of Love and the Skull of Mondain. Then enter the Great Stygian Abyss.
In each level of the Abyss there is an altar. At each altar you need to use one of the eight stones and answer a question. If you used the right stone, the altar turns into a ladder that leads one story lower. At the end of the eight level waits the Chamber of the Codex of Ultimate Wisdom!
The question for the Word of Passage you answer with Veramocor and answer the questions successively with: Honesty, Compassion, Valor, Justice, Sacrifice, Honor, Spirituality, Humility, Truth, Love, Courage, Infinity.

Happy Computer July 1985: "Ultima IV is approx. 16 times as big as Ultima II and offers the player significantly more stuff to think about. Other characters that act on the screen have even gotten their own personality. So if you strike down an Orc it can happen that he will get his big brother and he then can take horrible revenge. Also duels are possible; many a nobleman challenge the player to a duel. Vote: recommendable." (German original by Heinrich Lenhardt, Manfred Kohlen)
(Note: This article referred to the original version, the conversion for the C64 was released one year later.)

FXXS: "Significantly more taste than Ultima III, group inventory instead of character inventory and smaller towns reduce some of the repeating effort and with the remastered version one can also finally switch off the time limit per move and use the joystick for the controls. The big hatch that is left is the too big influence of luck for the gold chests and with the promotions. It is a pity that you cannot sell herbs. Close 9 points."

The version "Ultima IV Remastered v2.2.1" by the "Genesis Project" offers next to different cheat modes and a savegame editor also numerous improvements, bug fixes, SuperCPU support, control with joystick and new graphics in the intro part (ported from the FM-Towns version). This version is available as D64, D71, D81 and EasyFlash cartridge image and also runs on CMD FD and CMD HD (see Links).

The introduction of Ultima IV - Quest of the Avatar

For the gallery the least moves until all eight companions are recruited count. It is played with the d81 version "U4remastered". "Idle without pass" is allowed to be able to play in the emulator with faster speed. 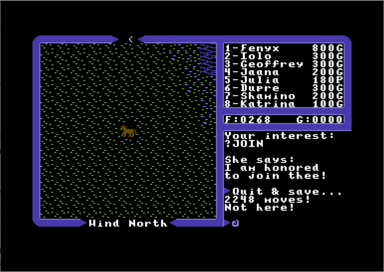 The following games were released in the Ultima games series for the C64:

Ultima I – The First Age of Darkness · Ultima II – The Revenge of the Enchantress! · Ultima III – Exodus
Ultima IV – Quest of the Avatar · Ultima V – Warriors of Destiny · Ultima VI – The False Prophet