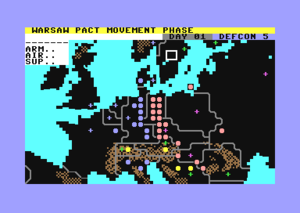 This is the situation at the beginning of the game.

Theatre Europe is a British video game released in 1985. It's a turn-based strategy game with optional shoot'em up screens. It was ported in many systems of the time and received positive reviews. The publisher, Personal Software Services, specialized in strategy games, and wrote several titles with similar gameplay and graphics.

The game tries to simulate a world war between NATO and the Warsaw Pact during the 80s, and feature conventional battles as well as NBC weapons. The game is single player: the human player can chose one of the two sides and the computer will command the other side. For the Warsaw Pact, the objective is to advance with several divisions beyond the Rhine within 29 in-game days, while NATO has to prevent this. If the player launches a total nuclear attack, the computer opponent will always retaliate and this will lead to mutual annihilation. Imminent conventional defeat or repeated use by either side of NBC weapons may prompt the computer to launch a total nuclear attack, and if the player's reflex system is on, he will automatically retaliate and this will lead to mutual annihilation; if the player's reflex system is off, retaliation to such attack is not possible and the computer will win.

During development, PSS inquired about the actual military strength fielded in Europe, and contacted Soviet and British institutions for information. The coders eventually discovered that communist forces where vastly superior and wondered if it would have been possible to write a playable game. Eventually, balance was reached by downsizing Russian forces and by providing the computer with very crude instructions to guide its moves. Playing on the Warsaw Pact side is quite easy, while winning as NATO is somewhat challenging and it's possible only because the computer doesn't play as well as a human player would.

Upon release, the game created some controversy in England and Finland, where sale of the game was seen as a provocation to the Soviet Union and criticised in the parliament. The game was relatively popular in Eastern Europe in the 80s and has been translated into Spanish and Italian.

The game was notable because, in order to access certain options, players were required to insert a password. The password wasn't provided in-game or in the manual; instead, the player was instructed to call a number. The number, available only in the United Kingdom at the time of game's release, connected the caller with a recorded message. After sounds effects of screams and explosions, the message disclosed the password to access strategic nuclear options was "midnight sun".

The opening and ending screen of the game greet the player with an electronic version of "Give Peace a Chance" by John Lennon.

Before beginning the game, the player has to choose between some options:

This is the main screen.

When the game starts the player is presented with the following screen:

The game is played in turns and lasts a maximum of 15 turns. The human player always starts the game and then the computer plays. After both players ended their turn, the game advances two in-game days. Every turn is divided in phases: 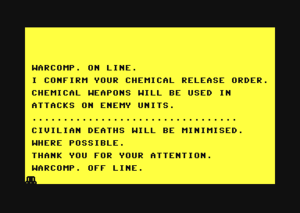 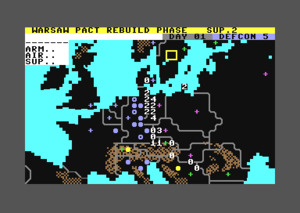 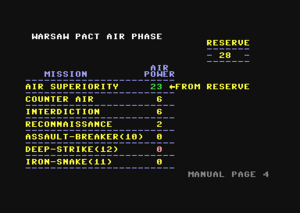 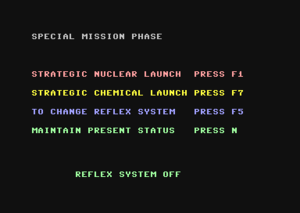 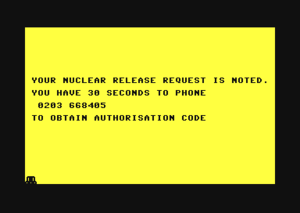 This number was disconnected long ago. 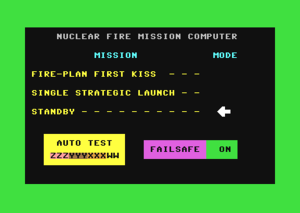 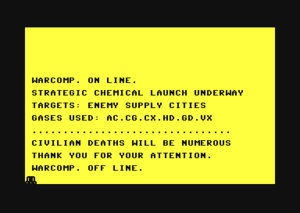 After the player went through all his turn's phases, the computer will do the same, until the end of the game.

The game is not really difficult, but it's a strategy game so some thought is required. Many aspects of the game are not explained and many values are not displayed, so it's very useful to read the following suggestions.

There are four kind of endings: 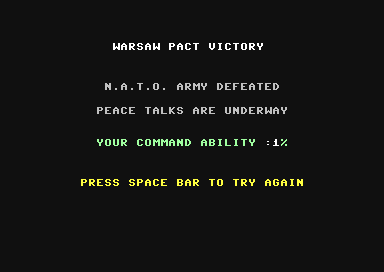