After "Roger the Dodger", the master thief from the game Blagger, has retired, you are allowed to accompany his son "Slippery Sid" this time on his search for keys. Sid, however, has not followed his fathers footsteps and is on burglary tour, but he makes his money as spy.

This time he has taken over the job to spy on the "National Security HQ". This consists of 12 divisions (level), which are divided from each other by locked doors and which can only be passed (how else can it be) when all keys from one division have been collected. Additionally, also products of scientific experiments haunt around in the complex and are used as guards, many items lying around are deadly, and also firm walls and floors can dissolve . . .

You start with three lives and get a bonus life for solving a level.

A platformer scrolling into all directions, where each only one section of the whole game area is visible. It is very important that you keep the correct path, as else you get very fast to a place where you do not have any possibility to collect further keys or reach a door.

... There is no proper ending, after this end sequence it starts anew with a higher difficulty grade.

Camailleon: "The level design is indeed exciting, but I would have preferred the pawn to be a bit faster. When jumping one sometimes gets caught in a tiny bit of an obstacle which annoys me. Furthermore it happened to me every now and then, that an enemy sprite was gone. 6 points." 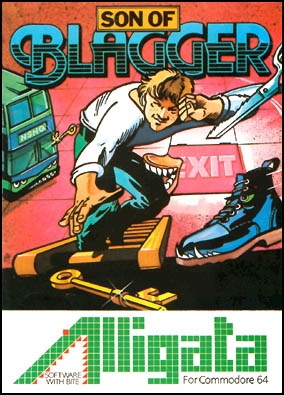 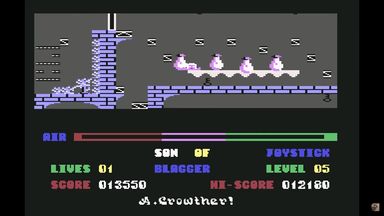