Short Circuit is a computer game by the company Ocean consisting of two parts, and the movie conversion of the Hollywood comedy with the same name.

No. 5 is actually a military robot and due to this primarily made to kill and eliminate enemies. But then No. 5 is hit by a lightning an developed human-like feelings. He himself uses to say:

This does not suit the plans of the commanders of the military, they want to disassemble their former killing machine into its components and repair it, which would, however, mean death for No. 5.

So the clever robot betakes himself to flight. First, No. 5 needs to escape from the military base and for this build a look-alike. Then he needs to escape the military pursuers. During this, the moral robot is not allowed to kill or harm anyone, his sensitive psyche would not get over this. The beginning - no equip yet, no input...

Short Circuit is divided into two parts. The first part is an adventure, in which No. 5 needs to search for hardware and other objects, deactivate alarm mechanisms and security arrangements in an area the size of approx. 36 screens to finally build a robot double. When the escape with the double is successful, the second part of the game starts, a Jump & Run. Here they used a lot of humour. Flying elefants and sharks in the duck pond are only two of the numerous fun elements. As a speciality you need to avoid the animals running around and only eliminate the soldiers with a laser shot at the belt buckle. Furthermore, you need to quickly avoid your robot colleagues. Different types of terrain, as e.g. mud puddles, aggrevate proceeding.

Controls in part 1 of the game[edit]

If you are in a menue you can confirm with the fire button and choose continue or no with the joystick.

Controls in part 2 of the game[edit]

The map for the game.

Walkthrough for part 1 of the game[edit]

At the beginning you choose the function EXAMINE with Space , search for the "JUMP ROM" in the fifth room (see map) and finally pick it up. Now you can use the function JUMP with the space key.
In the seventh room you meet robot no. 1 who imitates your movements and thus blocks the way. You can get around that with a long jump from top to bottom to then quickly proceed to the right, before no. 1 has time to react. You can pass the other robots with the same technique. In the tenth room there is a desk, here No. 5 can find a "PASSCARD". To the left there is a console, directly next to the door (terminal a on the map). Here you choose with UTILIZE in the menu INPUT the Passcard. By this, the alarm of no. 2 is deactivated for approx. 1 minute. After using it, the Passcard can instantly be put down at the console with UTILIZE and HIDE, because it is not needed at any other point in the game. This way it is available without straining the limited inventory. After jumping over no. 2 you first pick up the "DESK KEY". This desk is important, you will use the computer there (terminal b on the map) several times. In room 12 you can unlock the drawer in the closet with UTILIZE, INPUT and "DESK KEY", in which you find the "CONSTRUCTION ROM". But it is not needed yet. In room 13 No. 5 needs to take the "PASSWORD", in room 15 the "COMPUTER PROTOCOLS". At the left side of the room is a book shelf. Move No. 5 to the shelf and choose "SEARCH". You will find the password, so take it. In the closet at the right side of the room you can use the "DESK KEY" again and pick up a "SET OF KEYS". You can put down the "DESK KEY" now, but should remember the place carefully, it will be needed again.
Then you put down the "COMPUTER PROTOCOLS" at terminal b.
Then go back, passing no. 2, to the filing cabinet with the "SECURITY DOCUMENTS" and take them with you.
With the help of the "PASSCARD" that lies at terminal a the alarm is deactivated again for a minute, the you jump no. 2 again. Directly behind at the left desk, put down the "SET OF KEYS" at terminal b. In front of terminal b you need to position pixel-exact. In the correct position you get the message "LOG ON". With UTILIZE and INPUT the "PASSWORD" is entered. Then use the "COMPUTER PROTOCOL" also with UTILIZE and INPUT. When the message "LINK ACHIVED" appears, use the "SECURITY DOCUMENTS" as normal. The alarm at no. 3 is permanently deactivated. Then pick up the "DESK KEY" again.
After that go right and jump the robots as usual until you reach room 21 on the map. There you pick up the "CHUB KEY".
In room 22 this is put down again between the table and the couch. It is needed later.
Then the desk in room 24 on the left side is unlocked with the "DESK KEY", which gets you a few points. The closet in the right half of the room is unlocked with the "SET OF KEYS", then you take the "SYSTEM MANUAL" out of it. The "DESK KEY" can be put down again here, same as the "SET OF KEYS".
Back to room 16, in which also robot no. 3 is, is a desk in the middle of the room. Here you find the "LASER ROM" that you pick up. This find is, however, put down again in room 12, at best in the closet that was unlocked before.
In room 5 you pick up the "PASSWORD" from terminal b again, same as the "COMPUTER PROTOCOLS". At the computer first the "PASSWORD" is used by INPUT, the message LOG ON should appear after that. If this does not happen, the position of No. 5 in front of the computer is not correct, he needs to stand pixel-exact. If the message appears, then use the "COMPUTER PROTOCOLS" with INPUT. Then choose the FIRE SYSTEM MANUAL, the message SPRINKLER SYSTEM OFF should appear. Then log out and put down "PASSWORD", "COMPUTER PROTOCOLS" and "FIRE SYSTEM MANUAL", these objects are no longer needed.
Then back to room 22, where the "CHUB KEY" was hidden, take it with you. At this place you can also find a "LIGHTED CIGARETTE", which you should pick up.
In room 25, you must not simply pass the edge of the desk in the left half of the screen. The trick here is to wait until the game time shows an uneven minute (1, 3, 5, 7 or 9). For the next steps you only have a maximum of one minute: No. 5 needs to put down the "LIGHTED CIGARETTE" in the recycle bin in the middle of the room with HIDE. At the left half of the desk the "CHUB KEY" is used, then take the "CONSTRUCTION DOCUMENTS" and quickly leave the room to the left.
Then go back to room 13 as quickly as possible, you now have only 4 minutes left to escape. After arriving there, put down the "CHUB KEY" in the book shelf.
Then go on to room 12 and take the "LASER ROM" again, put down everything there, then pick it up again in the correct order: "LASER ROM", "CONSTRUCTION ROM", "JUMP ROM", "CONSTRUCTION DOCUMENTS". Time to make an exit quickly - so avoid the two robots on the way out with the jump function and then through the door in room 1!

There are cracked versions with built-in trainer menus, e.g. by Nostalgia. There it is possible to jump directly to part 2 of the game, as otherwise the adventure part would have to played anew each time.

Happy Computer Games Special May 1987 (Graphics: 78%, Sound: 81%, Happy Vote: 70%): "A new game about a not quite so new movie is there. The computer game consists of two different parts that you can choose. The first episode is an action adventure in which No. 5 needs to try to escape the building of the Nova Institute. To get past the guards in all the rooms he needs certain items which, however, he needs to find first. In the second game, No.5 has already escaped and he rolls through a wonderful landscape. Here skill is required, because the evil robot-catchers need to be paralysed. At the same time No. 5 has to jump over animals, because if he injures a bunny or a mouse, he will get energy subtracted. A real robot softie! There also a small gag inside: Next to the birds, also a small elephant is flying through the air! None of the two section is markedly inventive, but especially the skill part is rather entertaining. This is primarily due to the very good graphics (some extra praise for the title screen and the sprites) and the music. Here Martin Galway has scored again. Amongst his three tunes there is his version of the movie hit 'Who's Johnny?' as a real smash. Short Circuit offers much pleasure in terms of graphics and sound, but not to the same extent for the gameplay. However, the double programme is not bad and fans of the cinema robot No. 5 will have fun with the game." (German original from Heinrich Lenhardt)

Shmendric: "Approx. in 1990 I have bought this cassette for 5 DM from a budget games rummage table and was at first delighted as a enthusiast of the movie and as adventure fan. But this subsided rather quickly as next to logic lots of trial and error was needed - not quite my taste. The jump & run part is rather successful." 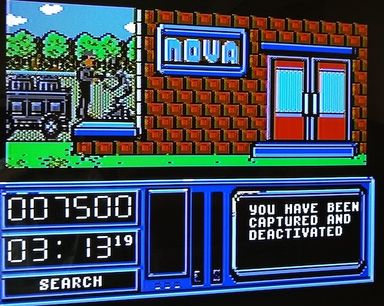