R1-D1 (a pun on the droid R2-D2 from Star Wars) is a surveillance robot, that has to fight other robots which have turned evil form some reason. So much for the background story. To fulfill its mission, R1-D1 has to fight through a labyrinth of platforms, collecting keys and opening the doors of the corresponding colors, in order to finally escape via reaching the very right of the bottom platform ("OUT"). When this is accomplished, you start again, only the enemy robots become faster each round.

The original release of R1-D1 Unit Attack did not have any title screen but only displayed the first game screen ("IN") with the prompt "PRESS FIRE TO START". The player sprite and the only enemy sprite are decently animated. Apart from that, the graphics can be regarded as between functional and Spartan; objects such as walls, doors, keys, elevators are pretty clear to distinguish. By the diagonals surrounging the actual game some kind of 3D depth effect is created.

The game's music by Antony Crowther is by far more famous than the game, mostly because it has been used in the legendary Eagle Soft crack intro that was used for ESI's crack of the game Pirates!.

Besides, Crowther did everything all by himself, also the graphics and the code.

Back in the 80s there were (apart from some buggy ones) about a dozen working cracks, some providing an unlimited lives cheat. The Mayday! +5DGH version from 2019 offers some more trainer options, a highscore saver and a simple PETSCII title picture, based on the tape cover.

Title screen and further extras in the 1986 F4 Mod

The Fantastic Four's version goes far beyond a mere crack. It provides a nicely done multicolor title screen and the option to toggle between "Trainer" and "Normal" by pressing C= key. The normal mode also allows successful players to enter there name when reaching a highscore, which is then displayed in the upper scrolltext of the title screen. Moreover, there's additional music, ripped from the game Phantoms of the Asteroid, as well as some top/bottom-border fun, i.e. two logo sprites ("F" and "4") plus the player's ship sprite from Uridium.

Once you've completed a level via "OUT" (right end of bottom platform), the game starts anew with faster robot enemies. There is no real ending.

If unlimited lives is not enough, check out the already mentioned Mayday! Version.

TheRyk: "For a budget/magazine one-man project there's little to complain about. However, it's a little too monotonous for longlasting fun. The music is an absolute cassic. All in all, I rate R1-D1 6 out of 10 points."

A short video by The VideoGames Museum on Youtube, presenting the game. As the player picks the purple key after opening the white door, he can't finish the game. 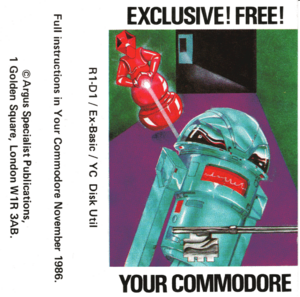 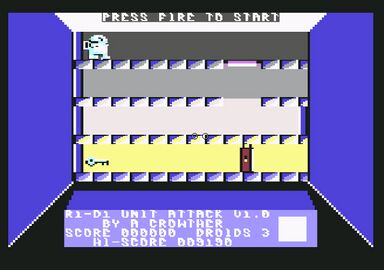