From C64-Wiki
(Redirected from graphics)
Jump to navigationJump to search

The Commodore 64 was designed to deliver a number of official graphics modes which provide for combinations of character graphics, bitmap graphics and sprites in single and multicolour. All of which can be mixed. The various modes were implemented using the VIC-II. As familiarity with the VIC-II grew, users developed non-official techniques which delivered graphical improvements. 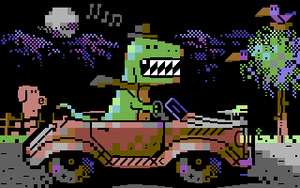 The selection of graphics modes is determined by the combined setting (or clearing) of three bits in the two VIC-II control registers. In Control Register 1 ($D011) the flags are Bit 5 (BMM (Bitmap Mode)) and Bit 6 (ECM (Extended Color Mode)). In Control Register 2 ($D016) the flag is Bit 4 (MCM (Multicolor Mode)). Table 1 highlights the bits in the two control registers.

Modes 0-4 are documented, and were therefore supported, by Commodore. Modes 5-7 are technically feasible, but considered illegal. Although the features expected of modes 5-7 are present (such as collision detection), there is no visible screen output for the user. It is for this reason that they are not utilised.

There are a number of user, or unofficial, modes which have been developed to improve the quality of graphics from the VIC-II. However, rather than being true “modes”, they are actually programming techniques which exploit flaws in the VIC-II; sometimes in combination with raster interrupts, interlacing and sprites. The various effects create graphics which appear to create a larger display area and/or an increased palette; although, notably, never increasing the maximum VIC-II pixel density. Essentially these improvements are achieved through software, as opposed to the official modes which are achieved through hardware. The known techniques are:

New graphics modes in first use are also listed in the Timetable of C64 demos.