The FBI is being blackmailed! A central unit of the FBI is controlled by a hostile secret service to get their own spies free. If the FBI does not agree to the claims, the hostile secret service threatens to detonate a bomb that was placed in the upper floor of a hotel. An IT specialist has already been smuggled into the hotel to crack the code of the bomb – unfortunately he was caught before he could finally deactivate the bomb. However, he could hide small hints in the hotel, which enable the next agent that can reach the bomb to deactivate it.

So they are looking for an agent that takes over this hard and dangerous mission. To deactivate this bomb you need to fight through all floors until the 62nd floor and examine every corner. Every single hint is important! To complicate matters, you are chased by agents from the hostile secret service. In the house there are masses of elevators through which you have to channel your way to the top and which you can also use to do jinks.

Of course you are the one to take over this mission – what else are you an agent for – and to start you enter your name. With a “Good Luck” and your service weapon you are sent on the journey.

For the year of creation the graphics of the game Mission Elevator are good, detailed and many colours are used. The movements of the characters are most of the time very fluent, whereby e.g. the jump of the agent might put a smile on the face of one or the other. Shot agents fall to the ground and disappear in it. There is no music, but for almost everything there is a sound: the printer, the steps of the agent, the shots, while examining and finding certain items and hints.

To get the key for the emergency door is a part of the task.

Examine all items to get hints about how to deactivate the bomb without getting killed more than 8 times by the hostile agents. The hints are each one of the 4 directions right, left, up, down. These are important later to know how you deactivate the bomb.

The hotel is divided into 9 sections. In each section there are 2 hints to be found. To reach further floors and to get into the next section you need the key to the emergency door. It is owned by the porter, who hides behind one of the many blue doors. If you find him, he will liberally hand out the key to you. But to be able to open the blue doors you first need the universal key that is available in every section at the reception.

In the biggest part of the screen you see the hotel – here the examining and the shooting takes place. In the lower bar in the middle you see what you have just examined and what happens. Left to it, there is a split display. In the upper part there are the points and below that at the left the number of lives left.

Next to it you can see what key you carry with you at the moment:

The small yellow number shows the floor in which you are.

At the far right of the lower bar, there is a big number that shows the countdown of the bomb. It starts at 999.

Before the game starts

Enter the name by joystick

to confirm the letter. You can choose letters, numbers and special characters.

– close a door when a woman appears, controls during the dice game

- shoot, you can also shoot while ducking, but not while jumping 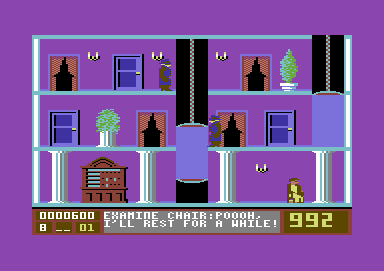 If you want a secret tip, you have to bribe a hostile agent. Below every painting you find some money. If you examine a painting you automatically pick up the money. At the next object that you examine, you will put down the money. After that it is only a matter of time until you will receive a whispered tip:

Every now and then you will see a bar. As you should also search this facility, you will inevitably get in contact with the barkeeper, who invites you for a drink. You can choose between milk, beer and whisky. With the joystick you choose something and confirm it with the fire button. If you choose a drink that contains alcohol, he will give 2 numbers of 2 the floors where the directions are hidden (if you didn't find them yet). Keep in mind, that alcohol while on duty is not good...

In the hotel there are also sockets, which you also need to search. But as we all know it can be rather dangerous to put your finger into a socket, so be careful what you do, or the game is over very quickly.

If you examine the fire hose, you use it and extinguish all candles. It gets dark abruptly in the hotel, however, you still can see everything, even the shots that race towards you. It gets light again when you lose a life or when you examine a plant. Behind them you find some matches, by which it gets light again.

Each of the long case clocks plays the same melody (anyone who doesn‘t know it?). You can listen to it, when examining the clock.

Everything else does not get you any points. 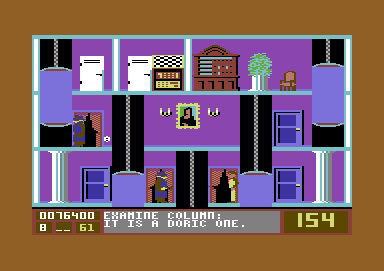 When you arrive at the uppermost floor, you can see the bomb from a distance. When you have reached it, you turn to the computer and get your notes with the hints. 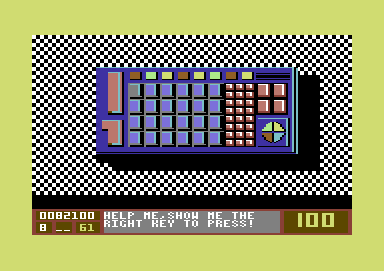 Starting from the flashing button you have to go the way in which the collected hints point. These are always different in every game. When you think you are on the right button, you press the fire button on the joystick and hope for a good ending...

The version by Remember offers the following options:

Camailleon: "The game is creative and has amusing elements. The difficulty level on the other hand is very high, at the beginning the fast reactions that you need, when an agent appears behind you, are still feasible, but the higher you get the more agents work foresighted and you hardly have a chance. What adds to this is that there are up to 5 elevators on a screen, which aggravates advancing as you always have to wait for an elevator. However, it is always fun again. 8 points from me."

H.T.W: "At first sight the game looks like the game machine "Elevator Action", but through the mixture of arcade adventure and much action it is more intelligent to play. By searching of items (which kind of reminds one of Impossible Mission) and the many small gags (electric shock in sockets, bribing hostile agents, etc.) the game is really fun. Definitely felicitous this game...".

Bamse: "A great game, which I always liked to play. Successful mixture of skill, reaction and investigative flair with nice title music and fun factor!" 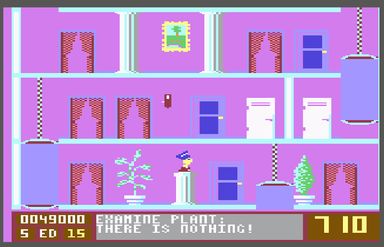