The Kung-Fu Master Thomas strolls through town with his girlfriend Sylvia. Suddenly, the two are attacked by several figures. While Thomas is distracted, Sylvia gets kidnapped. Thomas later finds a message from Mr. X, the owner of the Devil's Tempel. The message reads: "We have your lovely girlfriend Sylvia. If you want to save her life, come straight to the Devil's Temple. The five sons of the Devil will then attend to you."

The Temple consists of 5 hallways (levels), that have to be done in a certain amount of time (each 2000 points). Furthermore do Thomas and his opponents have life energy. Thomas' energy is also not allowed to reach zero, or else you need to repeat the level. All items and creatures that are only touched feed upon this energy. While dwarfs and henchmen, items and animals do have only little life energy, the knife thrower, however, needs to be hit twice. The end bosses have as much life energy as Tom. There are only points for fended off end bosses during an attack.

A horizontally scrolling game with multicoloured graphics, simple but catchy background music full of suspense and simple sound effects for the kicks, received and given blows, sounds of the animals and items. The game offers altogether 5 levels, in which each one end boss needs to be defeated at the end.

The screen is divided into 3 areas.

... another animation from the game

Additional keys in the game

Werner: "One of the best scrolling Beat'em Ups for the C64."

Jodigi: "The arcade machine version was a bit more difficult here, although the conversion was done 1:1. Maybe at home you do not play under so much stress as at the arcade machine. However, it is a great karate game which sometimes can enthuse me for hours."

Spaceball: "An absolute action hit. Very awesome game. Although it is rather monotonuous on the long run."

Rockford: "I cannot quite comprehend the elation. Loveless graphics, stupid enemies and bosses, which can be beaten practically in passing them and while hammering on the button in the first four levels, to then be an almost insurmountable obstacle. An ′Ugh!′ from me for the trick to force the player to switch between kicks and blows with ′Space′! 5 points from me."

Shmendric: "I have to agree partially with Rockford, the difficulty grade of the game is (as far as I remember) adjustable but with a bit of practice and a good joystick you can walk through the game comfortably. However, it was fun, it is just the 'addictive quality' that is missing." 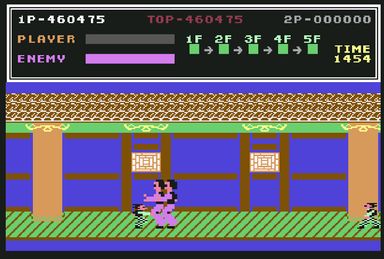