Finally a refreshingly different game: In "Jack the Nipper" you steer a baby through the kindergarden, police station, museum, side streets and allotments. During this you aim to miss no opportunity for mean tricks without getting caught by the victim.

So you run swiftly between the adults, put the most unbelievable items into the small pockets of the rompers, throw plates from the shelf, kill ghosts with the pea-shooter, overdraw mum's credit card and help criminals to a mass break out. The aim is clear: to become the naughtiest baby of all times!

Description according to the manual[edit | edit source]

"Jack was tired of all the whimps in his town, the boring games and goody goody ways to send him to sleep. So, Jack being of a rather naughty disposition set about livening things up a bit, he picked his trusty pea-shooter and scapered off to cause some trouble. "

The aim of the game is to make the Naughtyometer climb to 100% by using the found items correctly and without getting spanked five times until then. You count as spanked when Jack's Rash scale reaches the maximum by touching adults or other enemies.

Task according to the manual[edit | edit source]

"This is where you come in to take the role of Jack and use your imagination to be as naughty as possible doing the things you always wanted to but dare not (YOU WIMP!!). Jump on things, pick them up and drop them, use your pea-shooter to create smashing effects and toot your horn at the cat.

Use the items you pick wisely then you must work out where you have to drop them to cause ultimate havoc. For instance what could you do with a tube of glue?"

Jack is steered through a 2D world in which the single locations are drawn as Hires images. There is not scrolling - the screens are "turned over". Jack himself is a cute Hires sprite, all other people and items are realised as 4-coloured Lores sprites. This mixture works excellent and adds much to the cuteness factor of the game.

Sound and music are on a "nice" average level. There are a few well made and fitting sound effects, as e.g. Jack's whistling and the strange sound when a trouser bottom met his maker. The few music pieces of the game are rather saucy and let Jack dash snappily through the screens.

Basically, there are four different types of "fellow beings":

Jack‘s true antagonists are of course the adults! If you do a trick on them, their faces turn purple from rage, they storm towards Jack and try to stay with him to give him a flogging. This means for Jack a quick rise in the Rash display until he is spanked.

Jack should also avoid ghosts, crocodiles and other exotics as carnivorous plants, teeth and soap bubbles. However, they can be usually destroyed with the help of the pea-shooter. You should do this in any case with the ghosts, as some of them have the awkward feature of not leaving Jack’s side any more!

Also babies and dogs make the Rash display raise up. However, they never get angry at Jack. Nevertheless, there are some babies who do not want the leave Jack’s side.

And then there are also the cats. If they are sitting silently in the corner, they should not be touched! But other than dogs you can annoy them!

Jack can collect 19 different items in the course of the game (some of them in different versions). Some of them can be used several times, some need to be combined and others should be destroyed on the spot.

Partially, the items cannot be recognized from the image. This counts for the credit card that looks like a book and the clay, which also looks quite different... The battery even seems to be recognized wrongly in the manuals – it is more probable that this is a magnet!

Furthermore, there are items that cannot be collected as e.g. radiators (doors of the secret rooms), flowers or conveyor belts and computers. But these objects can be used if combined with other items. But be careful: objects as radiators and conveyor belts raise Jack’s Rash display!

At the end of the game you get a rating of your done impertinences:

How do I get the full 100% on the Naughtyometer?[edit | edit source]

It needs a few specialites to actually fully complete the game:

The 50 screens of "Jack the Nipper" are partially rather confusingly arranged. A help offer the few nicely done maps, that are for download at C64Games.de - Game No. 540 under "Solution": 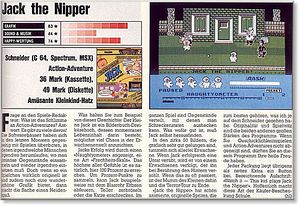 "Game critic of the Happy Computer"

Bamse: "Innovative, complex, original and cute: "Jack the Nipper" must not be missing in any collection!".

H.T.W: "Although it is basically "only" an action adventure, this game is somehow a bit "different". Already the original plot makes one notice. You are supposed to make as many tricks as possible with the knee-high boy named Jack and bring a great chaos into the orderly surrounding. The success of these actions is shown on a "Naughtyometer". This alone makes one smile. When Jack does a trick and e.g. scares the cat or breaks plates, he will be chased by an adult that, if he gets you, get him spanked. As the sprites are very nicely animated and the graphics are also rather appealingly drawn, one cannot avoid grinning derisively when you scare a cat and it hangs down from the ceiling the other way round. The necessary items to do the different tricks have to be searched before that and here we are at the "normal" action-adventure. Summary: A funny, innovative game that one can recommend to everyone who likes this genre. "

FXXS: "The game had a great copy protection, because you did not really know what to do here. Unfortunately, this was also not mentioned in the manual, by which the game had an unsurmountable copy protection for me as an owner of an original due to the illogical room arrangement. With the explanations here and the maps from C64games it probably would have deserved 7 or 8 points. But I still bemoan the fun I that escaped me at that time with the game and therefore I give 6 points." 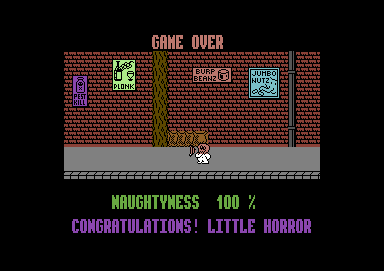