Jack the Nipper 2 is a jump'n'run game. The main actor in this game is Jack the Nipper, a small naughty baby with nappies and cool sunglasses. He is in the jungle where several adventures await him.

Imagine the scene – blazing hot sun beats down over a tropical forest, the only sounds to be heard are those of chattering monkeys, a trumpeting elephant and the screeching of the parakeets. Gazelles grace peacefully and zebras are sipping gently from a tropical pool when the peace is disturbed by the drone of an aeroplane.

Suddenly, a triumphant, blood curdling yell, swiftly followed by the sound of a thud, shatters the stillness – Jack has landed! So begins the story of Jack’s exploits in the jungle, after having been so dastardly in his last adventure.

The game is shown in 2D view, one can move freely in the jungle. Sound and music fit the game well and create a good mood. The graphics are diversified and show different landscapes. The C64 version partially differs from other versions (Schneider, Spectrum) of the game. In the C64 version you always start at the same place, whereas in the other versions there are random starting points.

= use nappy as parachute

Now they will announce you King of the Jungle :-) - and you have finished the game.

When you have already died once, you can also use the following POKEs:

zk: "Very nice and interesting C64 game with diversified jungle landscapes, good music and tricky tasks and if you do not move the joystick for a while, there are a few nicely animated gestures from Jack the Nipper."

H.T.W: "A worthy follower of the first part, partially with funny sprites, a huge, smoothly scrolling game area, well fitting background sounds and 10 tricky puzzles (one has to find out the solution to begin with). For me, however, the game is partially too difficult, as you not only have to jump pixel exact, but also the enemies are not half as bad. Without a map you stray around rather without plan at the beginning (you find a map on C64-Games.de) and also with the map it is not easy to find a certain place. It is also a pity that there is no highscore list. But nevertheless an interesting game.".

Patrick: A very long game, huge game world. Not as cute as the forerunner, but also not as many enemies. It is only a pity that the number of tricks is so limited. But it was funny and challenging. Occupied me for a long time. 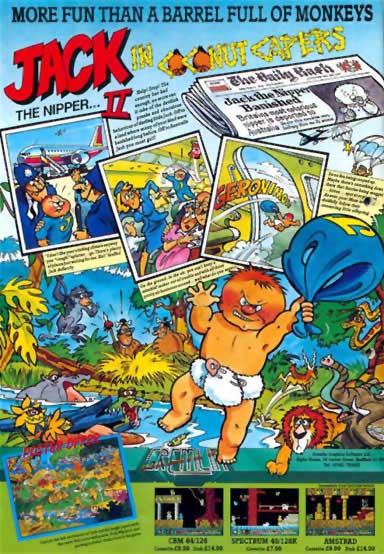 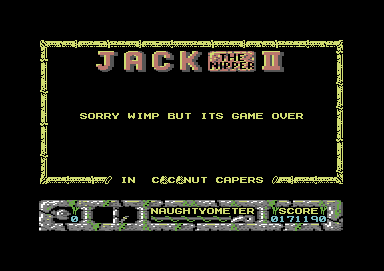