Hello! Anybody seen a ghost shortly? The fact is: yes! A whole lot of ghosts, which are on their way to fly to the infamous haunting headquarter. And you are now the only one who can avoid an apocalyptic-sized disaster.

The player becomes chief of a "Ghostbuster commando", which is supposed to clean the town from a horde of cruel ghosts and close the "gate to the other world". The phantoms are attracted by the temple of Zuul. The mayor of this town entrusts you to investigate the paranormal appearances of the recent past and to eliminate the ghost threats for the inhabitants. With this mission and a seed capital of 10.000$ you tackle the task.

The aim of the game[edit | edit source]

The primary aim is not to rescue the city, but to make profit, i.e. to have more than 10.000$ capital at the end of the game (with a new account). Even when the town is taken over by demons, it doesn't matter. If the account contains enough at the end of the game, you can play the final. If you make it here to successfully clean the city, there is an additional bonus of 5000 $.

First, the money is invested in nice equipment. You can choose between 4 different emergency cars, which differ in speed, loading capacity and -of course- in price. A VW Beetle is cheap and cute, but also slow and you cannot stuff much into it, a modified hearse has more power and space, but it is more expensive.

Besides the car you also need money for various other junk, which you can buy as e.g. ghost traps (mandatory), ghost vaccuum cleaner or a Marshmallow Sensor. When you have stocked up, you can start.

You find yourself in the streets of the town and you recognize a flashing house on the map, where a ghost is making trouble. So you get into your car and jet to that place. Arriving at the place where it all happens, you find a funny moving ghost you have to catch now.

Therefore you put up the trap in the middle of the screen and to the left and right each one Ghostbuster switches on his energy beam and tries to lure the ghost into the trap. When you think the ghost is in the right position you activate the trap. But as the ghost doesn't follow any pattern it can also escape, whereupon it slimes onto one of the busters and then buzzes off. The second mistake you can make is crossing the two energy beams, which results in two disabled Ghostbusters. If you catch the ghost, you are rewarded some money.

The whole game mainly goes like this, occasionally you have to go back to the HQ to get some traps or men or when the batteries of the energy beams are empty. You reach the end of the game when the paranormal energy of the town reaches 9999 points. This energy level starts at 0 and goes up constantly, at the beginning very slowly, then faster and faster.

Towards the end the hazard that the highly popular Marshmallow-Man appears and floors a house grows. As soon as a Marshmallow alert flashes at the lower border of your screen, the strays are about to come together to form a Marshmallow-Man very quickly. Here the "Marshmallow Sensor" pays off. It warns you against the threatening approach of the horrible Marshmallow-Man by showing the building at your position in white. Press they key B  as fast as possible to let go a bait, before it batters a building!!

If the energy level reaches 9999 points and you have more money than you started with (with a new account this would be more than $10.000), you automatically drive to the skyscraper on whose roof the god of demons Zuul should be freed by the ghost powers (same as in the movie). To avoid this, you have to get to the roof. You reach the skyscraper with 3 men, the entrance is guarded by the Marshmallow-Man which jumps around in front of the door. Two of the men have to make it through the door without getting crushed, then the world is saved. If this fails the game also ends, but you won't get any money as bonus.

The graphics were very good for that time, later there were of course even on the C64 games which were optically significantly improved. The musical accompaniment is the Ghostbusters song in infinite loop, additonally there are small effects and word samples - ("Ghostbusters", when pressing space in the intro and after catching a ghost, "He slimed me", when you fail trapping a ghost and you lose a man) - that was top at that time!

Here you are offered four different cars to choose from. You can view the cars by pressing first the Space  key, then entering the number (1-4) and confirming with Return .
You can buy the cars by simply pressing 1 , 2 , 3  or 4  without pressing the Space  key first. In some versions this has also to be confirmed with a press in Return .

When you have bought a car you proceed to the menu for choosing your equipment.

With the joystick you steer the forklift and load the desired equipment into your car. To change between the menues press the keys 1 , 2  and 3 . This must be confirmed with Enter  in some versions.
The amount of money that you have available is shown at the upper right on the screen, the price of each piece of equipment is shown to the right if it. As soon as you buy a piece of equipment, the amount is subtracted from your account.

When you have bought all equipment that you need press the key E  to get to the map of the city. This has to be confirmed with Enter  in some versions.

... another image from the game

When you arrive at the place of the alarm, you should use the joystick as follows:

Guybrush: "Ghostbusters was really fun for a long time, especially when I didn't really have the hang of it. But if you do it unfortunately gets very dreary, because then it is too simple as you have to do without different levels of difficulty or multiplayer versions. Anyway, a diverting fun and therefore 7 out of 10 points from me."

Shakermaker303: "It was not bad, although I never really had caught on everything in this game. I also never got to the end, but it was very entertaining anyway, rather diversified and you could hear nice speech output. Furthermore, the intro screen with music and superimposed lyrics was great, including pressing space bar to hear the classic "Ghostbusters". I also give here 7 out of 10 points."

Blubarju: "A very successful and entertaining conversion of the movie. But by and by it gets a bit dreary. Until then fun is guaranteed. 8 points."

Ragnarok: "One of the best software conversions of a movie, "Ghostbusters" transfers the flair of the movie through the speech output and fluent graphics. Crazy karaoke intro!"

Shmendric: "A nice and entertaining game, which due to the account system animates to play it through several times. But I cannot really comprehend why it became a C64 classic amongst the games. I probably would have even played it, if it had been significantly worse, because in my young years I virtually adored the movie." 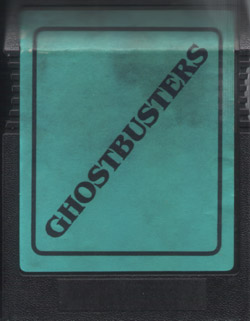 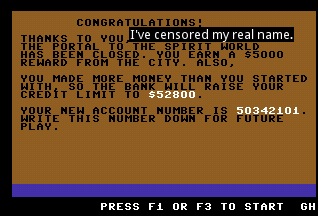