Warhawk is a vertically scrolling shoot 'em up for single player mode only. The ship is controlled with a joystick in port 2. With Space the game is paused. You navigate the spaceship Warhawk into various asteroid belts inhabited by enemy space bases. There is no proper story, but a shooter does not necessarily need one, anyway.

The objective is to destroy the aforesaid bases as completely as possible. If you succeed in doing so, you are awarded a "TOTAL BASE DESTRUCT BONUS" at the end of each level. Enemy space ships, meteorites and so-called space mines do their worst to prevent you from completing you mission. Meteorites cannot be destroyed, but remain intact even after ramming them, so they cause a lot of damage to your ship and should be avoided. You only have one single ship and cannot gain any extra lives. But as a compensation for this, the ship has got a shield which is recovering at the end of each level. Besides the already mentioned "total destruct bonus", there are further bonuses for shield energy you did not waste during a level and for the completion (survival) of a level. The only upgrade consists of a diamond-shaped object appearing after shooting a face-like enemy sprite. The upgrade is activated by contact, but is destroyed when you shoot at it. It provides extra speed and auto fire of limited duration. In the 'normal' version, the final fight of a level is against a squadron of kamikaze enemies. In the alternative Version, there is a boss enemy awaiting you at the end of each level.

The really great title screen belongs to the best and most detailed a C64 can display. Unfortunately, that is not true for the game graphics. Although there have been three-dimensional elements integrated into the the background and the enemy sprites, the own spacecraft lacks such effects and looks rather odd. And except for some decorative elements, the background remains plain and dull. It is not always easy to determine whether a space base element is a target or just decoration. But this would have been preferable in respect of the objective and the total base destruct bonus you try to accomplish in every level.

The game music by Rob Hubbard is an all times classic you will find in the top ten of many SID-charts. A special feature is that you will hear it as well in the title menu as during the game, where the lead voice shares the channel with the FX. The idea might have been inventive, but the result is that you hardly ever hear the melody, but only the bass line, because you are firing almost without interruption, especially in the higher levels. Regrettably, there is no option to switch between "music only" and "FX only", though both music and FX on their own are worth listening to.

If you play the version with the squadrons at the end of each level, you will often find a position where your ship is comparably safe. For example, in the lower levels these fights are usually no problem if you direct your craft to the left bottom corner of the screen and keep firing hell for leather.

Unknown. But you can find trainer versions on the appropriate websites.

TheRyk: "Again I find the high difficulty rather motivating than frustrating. Warhawk on C64 is a tricky shoot'em up with so-so graphics and pretty good sound. More upgrades would have been one means of improving the game. The auto-fire is no really amazing feature for owners of a Quickshot joystick. I didn't know the boss level version before writing this article, but neither can I recommend it. The bosses look ugly, move with the speed of light and make the game even more difficult. I rate Warhawk (squadron version) 6 of 10 points."

Rockford: "On the one hand, I am not a great fan of shoot'em ups, as I have hinted before. On the other hand, I used to play Warhawk for a while, maybe because it is so infinitely simple. I do not need fancy extra-weapons, so I do not miss them. But the boring enemy formations are a nuisance. Acoustically, it is a crime to let music and effects share one channel and to have interruptions of the music at any effect. It would have been better to do without any music during the game, this way it is just annoying, annoying! Conclusion: a graphically acceptable but with regard to gameplay below-average bang-banging. 5 Points."

Blubarju: "An average shooter, that you take out now and then. It is a pity, that the music in the game is constantly interrupted by the soundfx. It would either have done with a more sparingly arrangement during the game or one had fully resigned one of the two (music or soundfx). This way there's enough for 6 points."

The game had been regarded as a literally "cheap" clone of the Arcade Game Star Force by Tehkan from 1984, having nothing to do with the C64 game Starforce. Firebird released Warhawk for only £1.99 in 1986. The low budget character of the game could be the reason why the (otherwise notoriously particular) ZZAP!64 authors judged the game so mercifully after its release.

Recently versions labelled "Warhawk V1.0" or "Proteus" were dug out, which are minimally different from the original. They are said to be beta versions which Proteus Development has sent to Firebird but which never have been released. The main difference are large boss ships at the end of each level instead of the usual squadron of normal enemies.

In 1987, the Italian label Systems Editoriale sold "Demoni", a totally shameless rip of Warhawk. Only the graphics were modified; instead of a spacecraft the player moves a sorcerer through hords of demons. The manual praises the "amazing quality of graphic and sound" which is kind of bold, given that the sound of Warhawk was not changed at all, making the rip character even more obvious. The graphics consisting of mushrooms, craters and a few more or less ugly demons, are really amazing... amazingly poor for a commercial release, but see yourself:

It is unknown if Firebird ever licensed this release or knew about it. 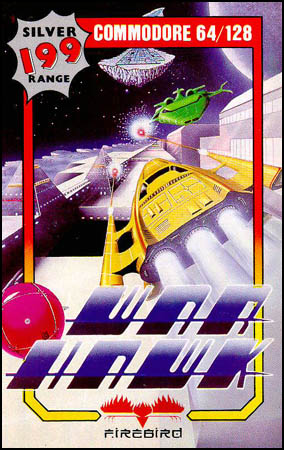 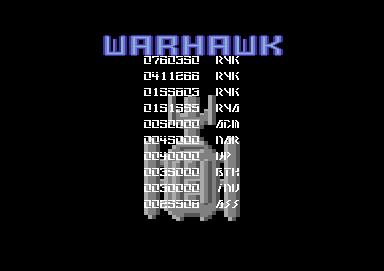