The aim of the game is to transfer fluid from the dispensing tank, through the level pipe and into the barrels below. The further you make it through the game, the more barrels are required to be filled before progressing.

To stop you from doing this, a number of enemies, in the form of hardware tools and other creatures, enter from the sides of the screen on supply pipes. These enemies then travel along the main pipe from end to end unless destroyed by shooting at them or by making contact with a fellow plumber. Some enemies cannot be shot at, and some require shooting from the correct direction (such as from behind).

Some enemy tools, most notably by their real world function, have the ability to break a hole in the pipe. If this breakage is not attended to, the fluid from the dispenser tank will leak out and will be wasted. There is a fixed capacity of fluid in the dispenser tank. If the fluid runs low, the pipe will flash, the sound effects will pulse a distress signal and the player's score will decrease until either all of the fluid is wasted or all of the barrels have been filled.

Breakages in the pipe can be fixed (after a short period of time) by an assistant plumber. These plumbers (in green) enter the pipe using the same supply pipes as the enemies. If an assistant plumber comes in contact with an enemy, the plumber is wiped out and falls to the bottom of the screen, where it then runs off-screen. In order to fix a break, you must first make contact with the assistant plumber. The plumber will then follow you as you travel around the pipe. With a plumber under your command, make your way towards a break and the assistant will then start fixing the break. Be sure to guard the plumber as if they come in contact with an enemy whilst fixing the pipe, the plumber will get wiped out and the break will remain.

Play continues until all of the lives have been lost. 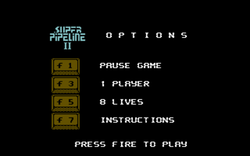 To enter push F1  into the title:

The player is controlled by a Joystick in Port 2:

Or by using the keyboard:

For killed enemies and filled barrels are given points.

Some enemies will travel along the pipe quite happily without causing any damage to the pipe. Some enemies however, will break the pipe. Look out for these enemies and guard the places that usually take damage.

In the CSDb exists some cracks with trainer mode.

Simon Shirley: "A fun game that gets very addictive". 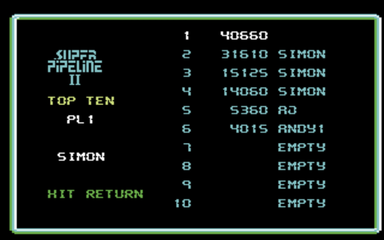