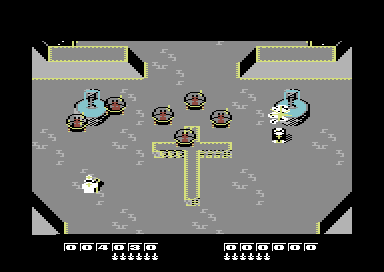 Space Pope and Robonun save the interstellar Catholic World.

"In the distant future space station Vatican 1 falls under attack from evil beings from planet Heck and the Catholics of the Christian galaxy turn to their hero Space pope and his trusty sidekick Robonun." That's all the SEUCK title screen reveals about the background story.

As in every SEUCK game, the player has to shoot a way through hordes of enemies, in this case to save the intergalactic Christendom from the evil aliens. You can do this either as Space Pope or Robonun or in a team of two players with both characters. You "shoot" with the good book also known as Bible in dark or light red hardcover to pulverize the enemies to stardust as seen in bad vampire movies or read in various horror novels.

Within SEUCK's limits, Dov Sherman did a decent job in terms of graphics, especially the sprites are animated quite well, whereas the background is rather simple though it provides some minor changes in the course of the game. The SEUCK standard SFX match the space shooter scenario very well, though they can really make you deaf or crazy in the long term. Normally, SEUCK does not provide any music, in the Priest Maxi version from 2013 there is a title song, a PETSCII title picture and a storable highscore list.

With fire button on joystick in port 2 or 1 you start a game as Space Pope or Robonun. From the beginning till the loss of the last life, a second player can join the game by pressing fire on the other joystick, but only once, i.e. not endlessly like in Gauntlet. Each player starts with 7 lives of which 6 are displayed in the lower border below the score. Every 10,000 points the players receive an extra life, you can collect 10 lives, though you are never shown more than 6. By pushing RESTORE  you can quit a game and enter the main menu.

There are a couple of further recurrent elements like planets, a space shuttle or something resembling a giant cyan curling stone or airhockey bat with incense clouds. But the objects not mentioned in the table above are only immovable background graphics. 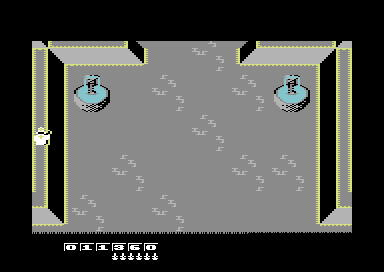 Lost in space: Having accomplished the whole game, the Space Pope is trapped due to the game design bug.

The developer made a mistake when designing the transition from the end to the new beginning of the game. If you pass the "Congratulations" sign too far left or right, the player sprite will appear on a position where it is trapped. This would have been avoidable if the last part had been designed as wide as the first.

So stay close to the sign when crossing the invisible finish-start line. Once you got stuck, you can only push RESTORE  to finish the game and as the case may be enter the highscore list. 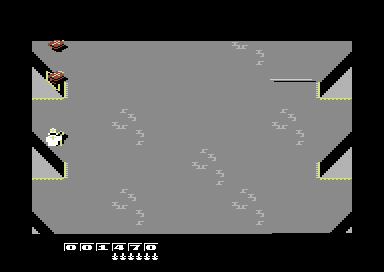 Sometimes you can throw whole libraries of Bibles without any effect due to the flawed SEUCK sprite collision. 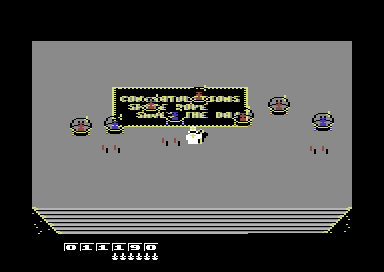 When you face the end of the game in form of that "Congratulations" sign graphics, be very careful. There is one more attack wave and the risk of being trapped by the game design bug. If you escaped from both, the game will start anew without any changes in difficulty or whatsoever.

In the "Ego te dissolvo! Aaahh!" version by Priest Maxi you can equip Space Pope and/or Robonun with unlimited lives and/or invincibility, which deactivates the highscore list.

In the Fat Fucks version (which crashes due to wrong trainer registers) there is the offer of "unlimited energy", God alone knows what it might be good for.

TheRyk: "I am no SEUCKomaniac at all, but rather shun those games. The more surprised I was to discover a rather playable and mostly well-done SEUCK game. Inspite of all the flaws SEUCK implicates, Sherman did the best he can to make those flaws as endurable as possible and moreover, did a great job in pixeling and animating the sprites. The crazy FX fireworks is a perfect match. The difficulty level is also well-balanced; though you will die quite often as a beginner, you are provided with enough lives to learn rather quickly. Beside a rather empty stretch in the middle of the game, it's getting more and more difficult continuously. What some people might regard a sacrilege, making a little fun of religion, is another aspect I particularly like, believing that God is no spurner of a good laugh Himself. I rate this game unprofane 7 out of 10 points."

Since this game was created with SEUCK and probably never published commercially, but rather spread by private copies, many things remain mysterious. The release year is not mentioned in the game and remains uncertain, though a certain ReadMe mentions 1991. The crack of the Fat Fucks is not dated either. Beside his name, nothing is known about the developer Dov Sherman. The fact that the Fat Fucks version only runs on NTSC video standard, indicates that Sherman might be from the US. The first name Dov is Hebrew and means "bear". If the developer is really a Jew, this might give the bizarre story of the game another comical facette.

SEUCK-Guru Richard Bayliss writes on CSDb about the Fat Fucks that they were "[...]a fun lamer label for the late 1990's which released trained SEUCK games[...]" but also didn't know enough about SEUCK memory mapping to train them properly which lead to bugs such as broken random shots. Based on such a "cracked beyond repair" version a certain Priest Maxi finally on Holy Thursday 2013 released a re-crack "out of competition" at TND's SEUCK compo. In that version Fat Fucks bugs are fixed, it runs on both PAL and NTSC and provides a storable highscorelist working with KERNEL load, so it should also support cartridge loaders like Action Replay or modern hardware such as SD2IEC, IDE64 etc.

In the ReadMe file mentioned in the Trivia section, it says: "This game contains blasphemy which some users may find offensive." Richard Bayliss/TND also comments the Priest Maxi Version: "Warning: This game consists of harsh language!" So if you are a very devout Catholic, you should maybe better stop reading right now and forget about the game, since the author of this article being a Protestant cannot tell you what Catholics have to do as penance for playing this game. 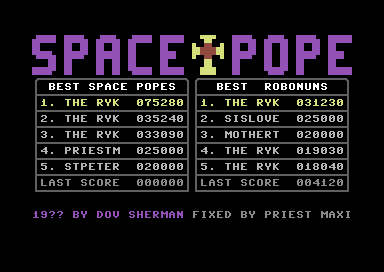