Set sail from Spain to the new world! Equip your expedition, and head west into the unknown. If you return with gold and new maps, you will be appointed governor, or even viceroy, by the court. Discover the new world. Explore the Mississippi, the Amazon, the Strait of Magellan, gold veins and 200 different settlements from small farm villages to mighty Aztec and Inca towns. The Aztec and Inca towns have the most gold. The natives are the key to success and a mirror of your soul. More than 2800 different screen graphics form the world that you will discover. Back in Spain, you can view a map that corresponds to your travels in the new world. The default map that comes with the game is a faithful copy of the geography and the population of North, Central and South America.

The game "Seven Cities of Gold" was graphically and acoustically first class at its time. Especially the details are enthusing: If autumn comes, the small trees change their colour.

...an animation from the game - the start.

Several levels are possible: Novices get basic equipment and instantly see all native villages. Depending on the situation, you can choose whether to trade, or to conquer. If successful, you can build forts or missions. Promotions are made after returning to Spain, and you may be rewarded with additional resources for further expeditions.

The original data disk contains historical, pre-Columbian America. A new, random world can be created on an empty disk with a required time of approx. 20 minutes.

If you trade peacefully with the natives, you will also get native bearers (which you unfortunately cannot take on a ship). In this manner your transport capacity increases on land, and the natives also work as guides. If you stop shortly on the normal overview map, it may happen that the natives point to hidden conditions (e.g. "Gold mine west"). The invisible object is then typically within the visible area of the map which you just need to search thoroughly in the direction that was given.

All actions are triggered over menus with the joystick. 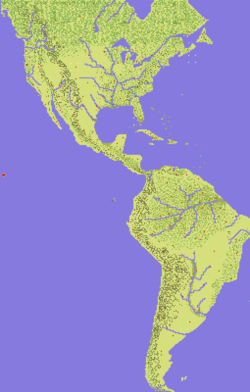 Sledgie: "Seven Cities of Gold is one of the first 'exploring games' and provided the game idea for many games of this genre to come. The game runs fast, the controls by joystick are very simple and the motivation lasts very long (at least with me)."

Klaws: "I have also played Seven Cities of Gold often and persistently - however, never until the end. It is acutally very much fun. But if you want to reach 100% of all conquer categories, the game will get rather tiring because the processes repeat themselves. There are no special demands for a strategic approach.

I once discovered one of the seven "lost cities" by fate. I bumped with the ship into an (optically empty) island the size of only one field. In the moment of contact an unusual text concerning the display of the terrain characteristics lit up and therefore I sent a team onto the island and thus discovered one of the hidden cities. As you cannot have native guides on board, I could have searched a long time for it without being lucky and stumbling upon it by fate. --Klaws 13:52, 23. Aug 2005 (CEST) ."

Gerry: "I still remember well how I played the game often with a friend. When you started the game, you were confronted with different options after some time. Depending on your choice you were asked to insert different disks. As our knowledge of English was quite bad at that time, we once chose the wrong option and with this accidentally deleted the game disk :-(." 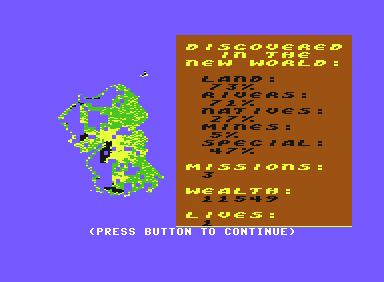