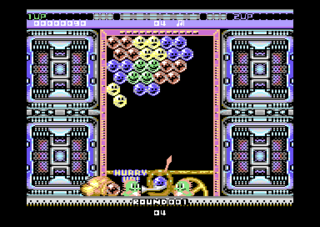 A game scene of "Puzzle Bobble" in single player mode.

Puzzle Bobble is an arcade puzzle game released in 1994 by Taito for arcade machines and some 16-bit consoles. The game features a comeback of the two cute dragons from the hit video game "Bubble Bobble".
The game "Puzzle Bubble" is also known as Bust-a-Move.

No official, commercial version of the game has been released for the C64. As early as 2002 there was an attempt to implement the game "Puzzle Bobble" for the C64. However, it has not been completed (only Preview status).
The version released in 2022 is a fan port from the demo scene, which is based on the Neo Geo version both visually and in terms of content.

When designing, value was placed on transporting the look of the game from the nineties as faithfully as possible to the C64 with the appropriate background music, the game sound and the noises of the dragons. This has worked very well. The inspiration for this was the implementation on the Neo Geo. 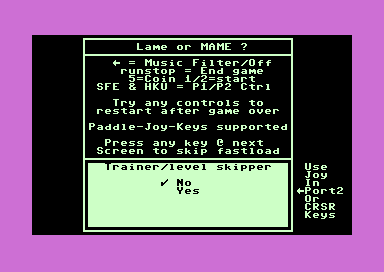 Before the game, the keyboard layout and the trainer selection appear.

In the two-player mode there is the following selection, which is made with the corresponding number key:

The version of JHB published in the CSDb already has a trainer function including the ability to skip levels.

Zore: "Puzzle Bobble is a cute game that shows that there are still a number of interesting games from the 90s that can technically be implemented very well on the C64 It's a nice reunion with the two dragons from Bubble Bobble, whose names are Bubby and Bobby, by the way, and who have had to wait far too long for their return to the good old bread box."

Jodigi: "Very good arcade implementation of this beautiful, funny and charming game of skill, which also spreads fun and good mood on the C64. Of course, the loading times are a bit annoying..."

No official cover available for the C64 version

The C64 version uses different loading screens in the game. Some of them they used to promote other games they produce. 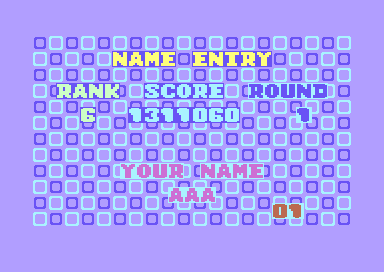