One on One: Julius Erving and Larry Bird 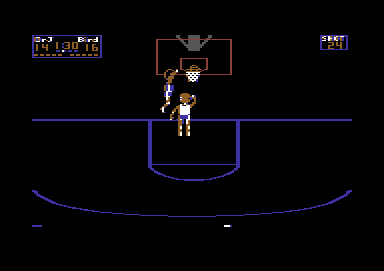 In this game Larry Bird and Julius "Dr. J" Erving, two legends of the North American basketball sport, compete against each other. One against one, "one on one", without any team members that could disturb. You can play alone against the computer whereby you can choose your own character and the CPU picks the other. Of course you can also compete against a human opponent or - for the lazy ones- let the computer play both players.

The game itself is done according to the known one-on-one rules. If you take the ball from the opponent, you have to leave the zone first, before you are allowed to score. If you do not do this, the opponent gets the ball. At the upper right ticks the "Shot Clock". If you have not done a throw before the time has run out, your opponent gets the ball.

The choice of the character has already an influence on the course of the game. Larry Bird (the pale character in the white shirt) is a big and heavy player. By this he is better with rebounds and has a better defence. Furthermore he scores more often when doing throws from the distance. Julius Erving (in the blue shirt) is a bit faster than Larry Bird. He can jump higher and has a bit more time in the air.

Another feature that is supposed to bring more realism to the game, is the fatigue display, which shows the player's exhaustion. Permanent running and dribbling exhausts the players which then cannot move as fast and score less. You can counteract this by moving less or taking a timeout. Both displays for the players (white for bird, blue for Erving) are at the lower border of the screen. The longer the bars, the more exhausted are the players. 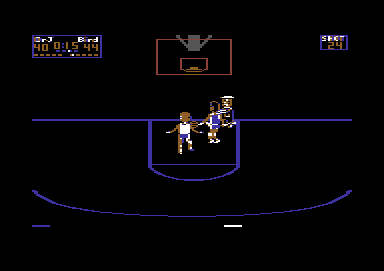 The game is graphically not very impressive at first sight. The complete background is black, the game area only marked with the most needed lines and the players got given only three colours. But during the game the graphics score with nice anmiations and the well-known feature of the destroyed board, whereupon the janitor cleans it up (see image at the left). Sometimes during the close duel the overview gets lost and you do not know exactly who has the ball.
The title tune is bad. Very bad. Only in the game itself you can enjoy the silence and listen to the dribbling sounds and the "flubb" sound of the net, the cheer of the audience, the siren (when the Shot Clock has run out or the end of the quarter is announced) and the referee's whistle. 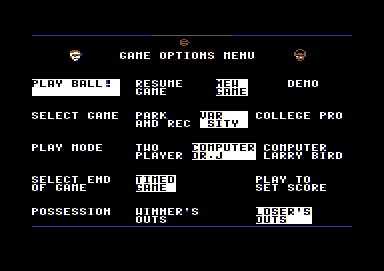 Options for the game

The menu consists of the following items: 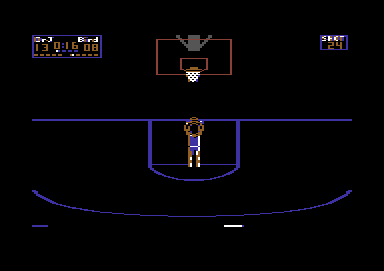 You can only win games with a strong defence. The opponent should be kept away from the basket early and with cover. By this the chance for a miss by the opponent rises. If this is the case you have to cleverly use your body and block away the opponent. With this the player gets the ball again and has himself the possibility to score.

Rockford: "Another classic which in contrast to its follower ′Michael Jordan and Larry Bird′ loses a bit graphically, but concerning the playability is one step ahead. 7 points."

Shakermaker303: "Great basketball game with fluent movements of the players. Certain moves (e.g. throw from a spin) look proper for the cirumstances at that time, the fun of the game still comes across well to me. I waver between 8 and 9 points and decide for the 9, as the game, concerning the age, is rather realistic in the controls. Furthermore, I have often seen basketball icon Larry Bird on TV in the old days and he was copied quite well into the C64 :-)" 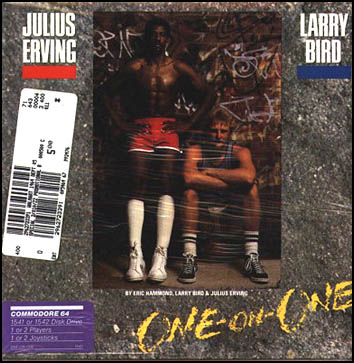 Who can find the six cans of beer?

For the highscore is relevant, who can reach the biggest lead with a player of his choice and the options "College" and "Loser's Out" in 4 x 2 minutes. 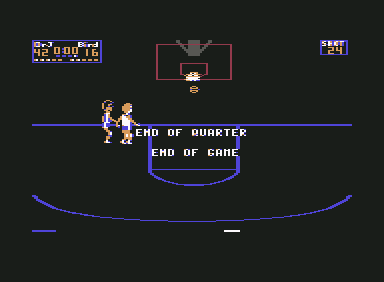