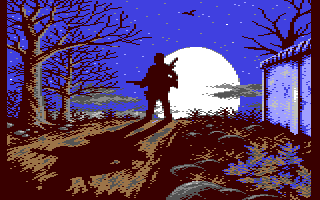 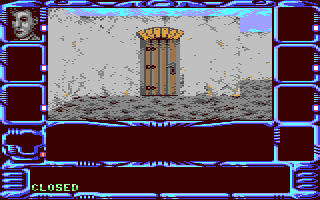 Newcomer is a RPG by Cinematic Intuitive Dynamix. The development time was 10 years and it is 7 disks long. Major sections of the game have lengthy animated cut scenes. The Game engine is very powerful and pushes the C64 to its limits.

Newcomer has the destinction of being the largest C64 game in terms of total disk count at the time of its release and may have had the longest development cycle of any professionally produced game.

The game is so huge that it can take weeks or even months to "beat." Even then you've only experienced one of several possible endings.

Neil is a newcomer to a prison island. Why is he here? Confusion, blurry images... jealousy! Now he remembers — he killed his unfaithful wife and her lover in a fit of rage. He is arrested for the crime. But something is wrong, as he wakes up on the island and not in a holding cell.

The Enhanced edition fixes a few glitches with the original version of the game. Nonetheless, Newcomer is beset by some compatibility issues. The most obvious is that it is designed around a PAL system's timing to the exclusion of NTSC. Second, the game code not only pushes the C64's 6502 CPU and the VIC-II graphics chip very hard — as many modern C64 games and demos do — but it also pushes the SID sound chip to its limits. While this will not damage a perfectly good SID sound chip, a partially failing SID with a few burned out registers has been known to cause the game to crash. Unfortunately, modern storage options, such as the SD2IEC are not well supported by the game out of the box. Newcomer is completely incompatible with the SuperCPU.

Intended az a re-release of Newcomer, dubbed "Newcommer Ultimate Edition" began development shortly after release. The Ultimate edition of Newcomer is being developed mostly to address compatibility issues with the game on NTSC machines, to auto-detect common hardware, and provide full support for modern storage and CPU solutions. This is intended to include:

Newcomer is partly classic adventure and part RPG and contains situations and encounters that occur in these genres. The focus is on the interaction with a large and varied number of characters, exploring the game world, the development of a wide range of skills within the game as in real life, and solving complex puzzles and mysteries.

The maps were taken from C64spiele.de[1]

Currently, no cheats are known.