The comets just did not see reason in the 80s. And Simon Nicol obviously also still did not have enough of the matter “belligerent heavenly bodies threaten humanity and then get crazy” in 1987 after Mad Planets and Crazy Comets. So he released a reissue of the classic. The label Martech could be passably sure, that this game would also sell like sliced bread. However, the eligible question arises: For what in Callisto’s name does one release a game that already exists for two years? If you consider all the deficiencies of Crazy Comets (you have to rather talk about bugs to be honest), you already have your answer.

What is it about the game, aside from the hair-rising "plot"? Of course it is again about shooting, until the laser miaows. Only little was changed at the main principle of Crazy Comets. At first it probably catches the eye that enormously big enemy sprites can appear. They are not called "crazy" any more, but "mega". The biggest objects are Mega Krypton and Mega Xothopian, quasi level end bosses, that appear in full size. 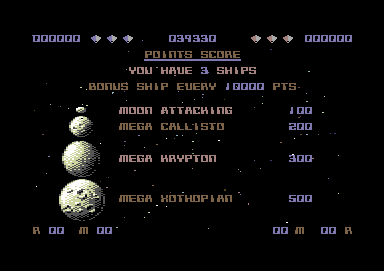 What else has been modified? At first there are several bonuses to collect, not only in the shape of score, but also extra lives as well as the upgrades Speed Up and Missile. Only the latter needs a short explanation. Other than it might be expected, it does not contain missiles, but a permanent laser which shoots without pressing the fire button. If you nevertheless press the fire button after collecting the missile upgrade, you can change the angle of the ship. For Crazy Comets veterans this is at first more confusing than useful. You can either get used to it or you keep in mind in which levels the upgrade appears and just let the fire button go after collecting it.

Course of the game: The upgrades and bonuses always open a level, if there are any. You can also shoot the goodies, but you do not die after the triggered explosion, if you fly into it, as in the forerunner game. In this phase of the level those mean small comets with a tail are likely to appear and mix themselves between the goodies so that you probably fly against them. Later they hinder you in "cleaning" the level before the approaching orbs get so big that they can bare very, very many hits and eventually pick up light speed flashingly . At the end of a level lurk Kryptons or Xothopians, not every time but ever more often.

A speciality are the two 2-player-simulatneous modes. With F1  you can choose between "One Player", "Dual Enemies" and "Dual Allies". At first this sounds exciting. But the difference in the game is not really recognizable. In none of the modes the shots of one player sprite kill the other player sprite. At least you can now tidy up the galaxy in pairs, which surely could cause a funny chaos especially in higher levels. A standard two-player mode (in turns) on the other hand does not exist anymore.

Graphics: Well, the graphical progress is not quite trailblazing, compared to the forerunner. The spaceship still looks as triangle-shaped as before, the planets are still round (okay, the bigger ones look rather attractive), the starfield still spins around nicely multi-coloured in the background. You only see the nice title screen while loading, the ingame start menu has been copied from Crazy Comets rather precisely. The new bonuses are designed with a 3D effect passably successfully. 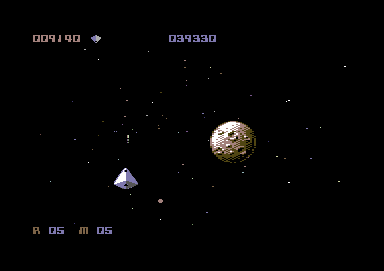 You can align the laser strictly straight as always... 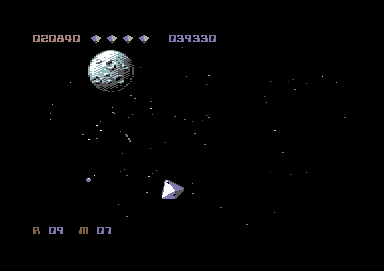 ...or you use the adjustable ange after the Missile upgrade

Sound: Rob Hubbard made a point of composing the ingame music also for the sequel. It blatantly picks up the famous theme from Crazy Comets again, one could almost speak of a Crazy Comets Remix, but a very successful one. The FX were contributed by Simon Nicol himself, amongst them next to cool shooting and explosions sounds also many very fine speech samples. FX and ingame music harmonize very well. One could almost tend to say "as good as it gets" concerning the sound in general.

Other: By removing many a bug, a more precise coliision query and the relativation of unfair situations with a massive number of bonus is Mega Apocalypse played significantly easier than the forerunner and can nevertheless fascinate for a long time by new levels with more and faster enemies. The only drop of bitterness is, that again bugs have crept in. If one player dies and the other “cleans” the level , it can happen that the next level is not initiiated, but the game keeps stuck endlessly in a enemy-empty level. The surviving can move and shoot and admire the background starfield while listening to nice music till the cows come home, the game is stuck and the only help is the key combination Commodore (pause) and Q (Quit) or Reset or emergency stop. In the original version the game just crashes after reaching level 99.

In the Remember version (release 86, e.g on Gamebase64, see links) the level 99+ bug was fixed so that the game jumps to level 1 after level 99. Futhermore there is Dox, a trainer and a highscore saver.

There are probably POKEs, but surely there are trainer versions, e.g. the above mentioned Remember release.

TheRyk: "I did not have the game back in the 80s and was a little skeptical about the idea that the classic Crazy Comets might really have needed a sequel or a remake. Even as a purist I need to appreciate that Mega-Apocalypse is a somewhat more playable Crazy Comets, at least in the one player mode. The whole game is balanced better than its ancestor, though the balancing consists only of half a dozen extra lives appearing at the beginning of some levels - there are still lots of of dodgy or even trappy situations. The upgrades make the game a little more interesting, though I personally regard them as rather superfluous (as with fire pressed you already have autofire, missile is not needed) or even counterproductive (the option of changing the angle does rather confuse than help). But this can be due to being accustomed to Crazy Comets for decades. The sound effects are just brilliant, which is also true for the ingame tune by the legendary master of SID. A good game to vent some anger, 6 of 10 points. If the bugs, especially the buggy 2-player simultaneous mode, would have been fixed, I might have voted this even higher."

Robotron2084: "Better graphics? Check! Better sound? Check! Better gameplay? Way from it! Behind a slightly mended facade hides the half baked new cake of the single-screen shooter Crazy Comets. In comparison to the forerunner the speed has become significantly faster. Especially at the beginning of the higher levels the events are so chaotic that you hardly can differ between friend and foe and in the whole mess you can easily lose several lives within a few seconds. The spaceship is far too big as measured by the prevailing speed, space to avoid is scarce. An admittedly seldom appearing bug, where the own shot just goes through the enemy in critical situations, guarantees passionate rage attacks.
The "extras" are at best named irrelevant, as the "Rotate" extra causes more confusion rather than helping the player. Also the scoring is solved badly: at the end, the highscore consists to 75% of the "Perfect Bonus". But you get this only, if you firstly have not lost a life (o.k.) and secondly if no planet has been allowed to grow too big (NOT o.k.). Here is for me a bit too much luck involved due to the mentioned deficiencies – as by the way also in the forerunner.
Mega Apocalypse is a simple, laborious and fustratingly unfair shooter and gets only due to its better optic one point more than Crazy Comets: which is 5 of 10 points.

Commodore  and Q  at the same time lead to a "star mode for insomniacs" (quote by Jack Alien/Remember) ;)

With Q  you return from this mode into the start menu.

The above mentioned bug (the next level is not initiiated if one player dies and the other "cleans" the level) appears preferably in level 3 and 4. 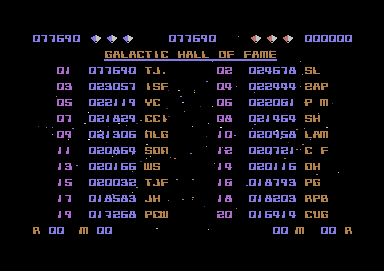