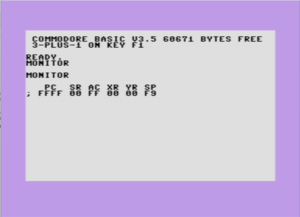 The MONITOR command on the Plus/4.

The MONITOR command is a BASIC command that launches TEDMON, the machine language monitor of Commodore's 8-bit systems, starting from the TED (Plus/4, C16, C116, etc.) series.

Example of calling the monitor and what the entry reports (on a C128 as an example):

Furthermore, entry into the monitor is triggered by a BRK-machine code command (possible with any memory location containing the value 0). In that case the monitor reports following output:

On the C128 the monitor could also invoked by pressing RUN/STOP  during a reset, in which case only a partial initialization occurs.