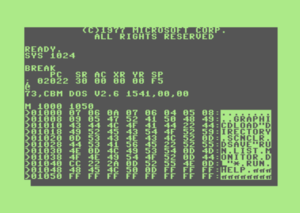 BASIC version BASIC 3.5 was the first to integrate a machine code monitor called TEDMON, launched by the BASIC commands MONITOR or SYS 1024 or during Reset/power-on while pressing RUN/STOP .
TEDMON is embedded in the home computer systems C16/116, C128/D/DCR and Plus/4.

The monitor is also called using the BREAK vector if the CPU encounters the BRK opcode. This kind of entry will be shown in the register display preceded with line stating BREAK. This can be used on the one hand as an entry from BASIC via SYS command (to any address containing zero) or on the other hand for debugging purposes. The monitor does not provide any special commands for breakpoints or step-by-step code walk-through. This can be done manually by temporarily patching a BRK opcode to the appropriate code section.

On entry of the monitor the following message is shown:

The first line states the CPU registers and the second one shows their current contents which is also used if the execution continues with command "G".

The abbreviations in the register line have following meaning:

All values, numbers and addresses are shown and processed in hexadecimal notation. 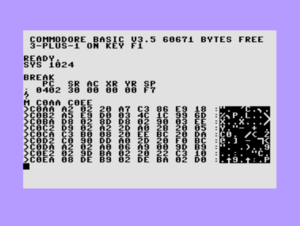 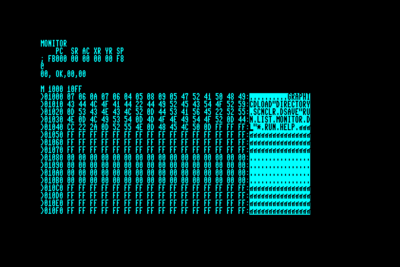 The following commands can used:

TEDMON has no input prompt! Only a blinking cursor on the screen's leftmost column shows that the machine code monitor is ready for input.
If a wrong input is given (unknown command) a question mark (?) appears.

The C128 version of TEDMON several numerical systems (number bases) can be selected by using the according prefix. Normally numbers are always in hexadecimal notation. Following prefixes exist:

Usually four-digit addresses are used to cover the whole 64 KByte address range of the CPU.

On a C128 with up to 16 banks (see also BASIC 7.0 command BANK) of 64 KByte in size addresses could consist of hexadecimal 5 digits. The leading nibble designates the currently selected bank: