Remark: This article describes the BASIC command TAN in BASIC V2 at the Commodore 64.

The numerical function TAN is a mathematical function which evaluates to the tangent for a given angle, a number regarded as being in radians.

If the term given in the parentheses is non-numerical, the BASIC error ?TYPE MISMATCH ERROR occurs. Being a floating point argument, the term must be in the range of ±2.93873588·10−38 to ±1.70141183·1038. Exceeding these limits yields the BASIC error ?OVERFLOW ERROR. Special values like +/-π/2 (+/- 90 degree) according to the definition of the function lead to the BASIC error ?DIVISION BY ZERO. Omitting the numeric argument or to many arguments results in a ?SYNTAX ERROR. 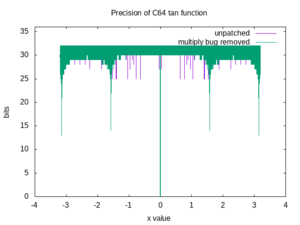 The graph to the right was obtained by comparing results from the BASIC TAN function to values computed on a modern x86-type PC.

For most inputs, TAN is accurate to about 29 bits. Values for which SIN and COS lose accuracy also lose accuracy for TAN. The accuracy close to X = 0 could be improved by patching SIN to return SIN(X) = X for |X| less than 2-11.

TAN calls SIN and COS, which call POLY1, which calls MLTPLY ($BA59), and consequently the multiply bug affects its results. A small number of input values give results that match to only 25 bits.

TAN(X) is implemented simply as SIN(X)/COS(X).

Defines the function of cotangent (tangent complement) as user defined function FN CT(), called with an angle of 45°.

Provokes the error ?DIVISION BY ZERO ERROR for an argument representing the angle of 90°.

On screen the value -7.3145904E-10 will be shown, a very small value near to 0 (also for all multiples of π), but not exactly reached caused by the inaccuratness of the internal implementation of the function.