Calculated multi-coloured 3D graphics, some sound effects (e.g. tee off), no background music. Up to 4 players can play 18, 36, 54 or 72 holes. There are 4 different golf courses.

Guybrush: "For me the second best golf game after Leaderboard 2. There you have additionally trees and dugouts, whereas here you only have water as an obstacle."

When the ball arrives close to the border of land and water, sometimes an additional small land is provided by the game, from which to perform your next stroke, without getting wet feet. Sometimes it is an island, which means actually the last ball went into the water! In some cases continuation of the game becomes impossible, because you are stuck on a yellow island. There's no club to reach the land. This bug is only applicable when you play in professional mode, having the bad luck the wind is blowing to the wrong direction... 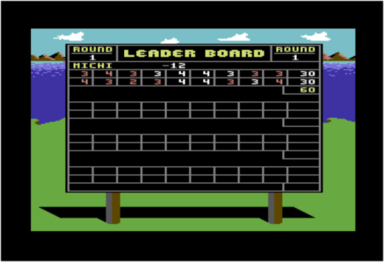