You are the pilot of a rescue helicopter. While you try to take castaways or fuel on board, enemy craft try to stop you. Initially, the enemy seems to be a foreign military power, but in level 2 it is revealed that this power either has superior technologly or gets help from outer space. A level is completed if all the shipwrecked are rescued.

The jeopardized people are either on objects named "islands" in the manual, swim in the sea or - if two enemy craft collide - hover in the air as parachutists. In the top of the screen you are informed with the dialogue "Inhabited" if anybody needs help on an island. If you approach carefully, a small ladder is dropped. You may not come too close to the water surface, enemies or explosions. After boarding you have to go to a basis station (an "island" with white installations) to unload the rescued.

After a nice title screen and the Ocean Loader tune, the game entertains with state of the art graphics and music of 1986, parallax scrolling and sea animation are positive aspects worth mentioning. However, the charset is not very well readable, which would have been desirable, especially for deciphering the score digits. Moreover, collision control should have been more accurate in a shoot'em up game.

Objects in the Game[edit | edit source]

The Helicopter on its Mission

= Helicopter moves in direction of the joystick

There is no real end of the game, so there is no solution either. Only objective is to score as high as possible.

Erwin33: "An easy game with no big story or elaborate graphics but a memorable sound. I liked to play it, anyway, and tried to improve my score again and again."

TheRyk: "Hmh, this Choplifter or Defender above the Ocean (<- harr!) ain't bad at all, visually and musically it is more than appealing. For a true hit some minor flaws should have been fixed, e.g. being reborn right in front of an enemy in the original game was really frustrating, a problem fixed in the Jewel Versions which fans should give a try. All in all, a nice game, solid performance, good / 6 Punkte."

Superwolf: "I used to have the tape version and digged the loader. First the title screen was slowly built up while music was playing. I also like the game and rate it 7 Points."

crashes if Restore-Key is pressed.

Missing Stability Trainer makes some other Trainer Options useless, because it can happen that you are stuck at the bottom of the screen, once you overloaded your helicopter in Invincibility Mode, for it will be impossible to unload.

crashes if Restore-Key is pressed.

Some modifications of flaws in original game: Fuel only brings fuel, no score anymore. In turn you get 50 points for bombing the patrol boats (in original game it brought you no score at all which is very likely a bug). After loss of life or level-up you are invincible for a few seconds to prevent unfair situation of being (re)born hopelessly close to an enemy sprite.

The modified Jewel Versions (without any trainer, of course) are allowed, because the 0 score for patrol boats/50 score for fuel is regarded as bug. 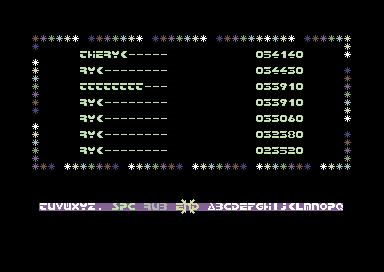