Programming computer games is a thrilling thing on computers. Depending on how much programming experience and programming languages, as well as knowledge in other computer subject areas like graphic processing and music or sound development one brings in, the better will the finished computer game at the end be.

The C64 offers with the built-in BASIC V2 many possibilities to create a game, however, you won't be able to simply create a terrific game as an action space shooter which still runs fluently with many spaceship opponents, has a quiff graphic design and even offers an interesting background music, without having deeper knowledge in assembler and machine language.

Constructions Kits facilitate this game development. They enable the game developer to create games faster and simpler with the help of an own programming language in a development environment, which are better than the ones made with BASIC V2 and run as fluently as games programmed directly in assembler when being finished. The trick is, that all data is integrated into the development environment and are at the end translated by a compilation with the help of a compiler at the end as an independently running operational machine language program.

An editor of "Garry Kitchen's GameMaker".

The following Construction Kits are for the C64: 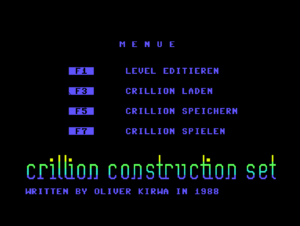 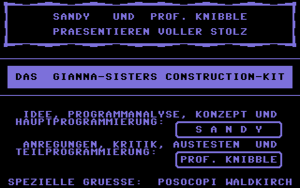