Mr. Robot and his Robot Factory

In altogether 22 scenes the pawn with a white protective suit needs to be moved through the level, so it can collect all power pills that are scattered on single scaffolds. The pills are picked up by walking over them. Moving flames are there as enemies and of course you need to avoid contact with them. The screens consist of an entanglement of different elements. There are magnets, trampolines, beamers, lifts, ladders poles and much more that can be used in different ways.

The game Mr. Robot and his Robot Factory is a platformer from the very start with fluent animations and some peculiarities as a collectable heat shield , that also extinguishes flames, bombs that are activated when walking over them and explode a short time after that and of course the for that time exceptional level editor with which whole series of levels can be created, saved and loaded.

Use the joystick (port 1)to steer Mr.Robot left, right, up and down. Press the fire button to let him jump over fire, to escalators from platform to platform, from teleport to teleport, etc. Press the key F7   to make a pause and once again F7   to go on playing. With the key Restore   you abort the current game and go back to the option screen. in the options screen

The game also has a Construction Kit with which you can create own scenes. Furthermore it is easy to use and all created scenes can be saved on disk without problems: Altogether 14 different elements can be used, from which escalators, conveyor belts, ladders and spring boards in any number and size can be built. All parts that can be built into the game are visible in the lower line of the screen. In the middle of the screen a cursor appears, which you can move with the joystick. Now you steer the cursor with the joystick to the desired part, then press of the fire button again and go upwards with it. There you can position the part with another press on the fire button. If you want to build a long ladder you do not have to place every part individually. Just stay on the fire button and move the joystick upwards and downwards until the ladder has the desired length. With the help of the letter "A" you can determine the position of the walking flames. With “R” the starting point of the robot is set. When the level is complete if can be put to the acid test with “Test” (return with key "F3"). If you are satisfied with your level you can play it with “Play” and in the end save it with the function “Disk”. With Restore  you get back to the option screen at any time.

Walk over the platforms from the lower left to the upper left and defeat the fire balls with energy balls. Avoid downwards jumps.

Take the energy pill and kill the two flames with it. If necessary and the energy is not enough, use also the other energy ball. Get the power pills below, to the upper left flame, then to the right flame. Use jumps systematically to reach the other platforms. The escalators get you up again. Scene D:

Kill the first flame. Be aware that if you step on a bomb it will explode. It won‘t destroy you immediately, but it will push you up, which either makes you lose a life or lifts you up to a higher platform if you are placed well. Continue your way to the right. Walk over the energy balls and the bombs, then destroy both flames by daring a fast jump. During the jump leave some bombs standing. After that your way leads you to the lower left. Then again over the ladder upwards and to the lower right to the last flame.

Walk over the big platform. First take the escalator up. Jump on the trampoline. Then teleport to the flames, but not until they walk to the right, as you fall down the rope when arriving. Jump over the flame into the direction of the trampoline. Repeat this three times and the take the ladder up, to get the last power pills.

Jump upwards at the edge of the trampoline so you do not swing and to reach the ball in the middle. Then jump over the trampolines to the energy ball and extinguish the flames. At the end, jump onto the last platform.

Walk towards the flame and extinguish it. Use the teleport to reach the platforms. Also extinguish the flames. Watch out for the ropes which carry you down.

Scene J: Deal with the two flames. Use the right magnet to get pulled, but do not fall down. First walk to the left and then take a run to be able to reach the other side with a jump. Repeat it with the second magnet. Watch out for the flames and also collect the balls.

Walk towards the flame and then over the bombs to the right. After picking up the energy ball jump up to the flame. Get down over the bombs. Collect the ball and jump to the upper platform. Then by using the rope slide down. As soon as the lower right and the left flame walk up, start walking downwards and then to the left. The bombs need to destroy the flames to the right. Take the energy ball on the left side to destroy the upper flame. Climb up and then right over the bombs to reach also the last platform.

This bonus round is easy to do. Walk along the path and collect all power wills. Then slide down the ropes. To collect the bonus points just jump up.

Jump to the left onto both bombs and pick up the energy ball to catch the flames. Jump over the lowest left bombs to the left and then up over the small platforms. Then again to the other side up the platforms.

Climb up and deal first with the upper flames. Then up again, where you extinguish the lower flames. Then start from the right and jump through to the upper left over the small platforms. Take care of and exact jump as else you will slide down the ropes.

Immediately jump to the upper left to avoid being shot up by the bomb. As here are no energy balls, be especially careful. Try to jump over bombs and climb up ladders and then to the platforms.

Then advance downwards to the energy ball. Extinguish the lower flames. Immediately jump to the right to also get the other flame and to collect the rest of the power pills.

In this scene there are also no energy balls. Take the way over the bombs and collect the power pills.

Jump over the rope. Let yourself fall down. Then jump on the platforms and do not use the ropes. Extinguish the other three flames and get the power pills.

First jump from the conveyor belt. Fight yourself over the other conveyor belts and jump on the platforms. Extinguish the flames and collect all three balls.

H.T.W: "Even today a well-playable platformer with well-thought-out levels that not only need accuracy while jumping, but also speed and planning. The fluent animations and the particularities as the heat shield, the bombs and the level editor please. Unfortunately, there is no highscore, but anyway it is one of the better games of this genre.".

Blubarju: "H.T.W already said it all. Very good playability and for those times very unusual: a level editor. 8 points."

Flodder: "Nice piece of programming art and very pleasant to play. If you then also consider the early year of release and compare it to other games from that time, this is for me a smooth 8." 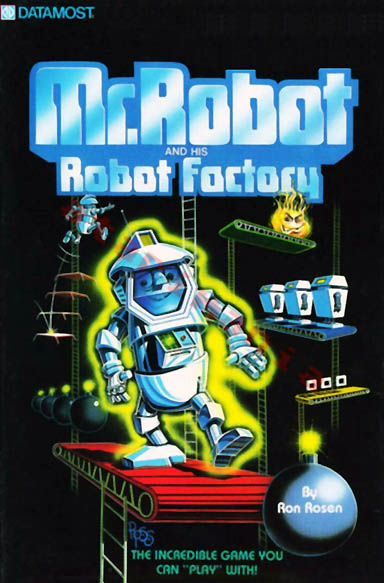 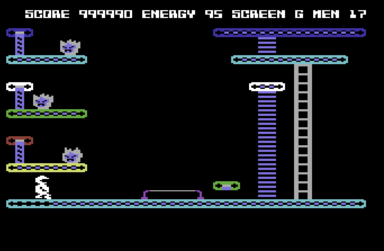