Open the gate! Castle Master is about to begin!

Castle Master is a 3D adventure game created entirely in vector graphics. You play either a prince or a princess and have to solve various puzzles and overcome enemies within a castle to free your beloved princess or prince (depending on whether you have chosen a male or female character).

On the quest inside the castle you have to trigger mechanisms and traps, fight ghosts and find keys to open locked doors. The final boss can only be defeated if all the ghosts have been eliminated first. Finding and defeating the ghosts is an essential part of the adventure. If you are in a room with a ghost, the screen lights up red.

The game is completely designed in a calculated 3D vector landscape, which is displayed in the middle of the screen and through which the player moves in the first-person perspective. In the lower part of the screen there is a text field with short room names as well as the display of heath. A logo with the title Castle Master is displayed at the top, while the game section is bordered by two graphic towers on the right and left.

On Lemon Amiga you can find a detailed walkthrough of the game and directions to all keys in English. 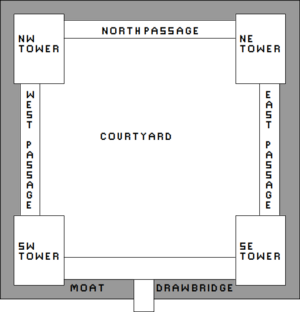 In the CSDb there are cracks with trainers.

"Inbound" cheat: after collecting the drink in the guard room, you'll be able to pass an open door by throwing a stone through it.

Zore: "Interesting puzzle adventure in 3D design. The controls are correspondingly clumsy, but the game is nevertheless interesting. Castle Master is one part of a whole series of adventures in this style by Incentive Software."

Castle Master is the fourth game that [Incentive Software]] produced on the Freescape engine. The direct successor, Castle Master II, was released the following year. Although the game is based on the same technology as the companies 3D Construction Kit, it was not made with this tool. 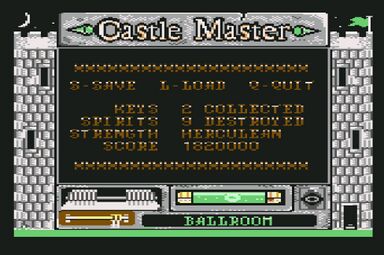