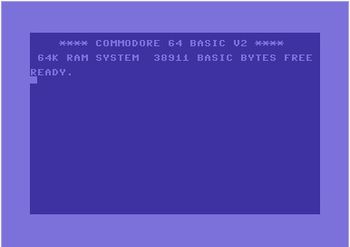 Startup screen from the Commodore 64

The Commodore 64 has its own operating system (short: OS), which is Commodore-BASIC V2.0 (Beginner's All-purpose Symbolic Instruction Code Version 2). After turning on the C64, there are 38911 free characters (i.e.: Bytes) in the RAM-Memory (main memory). In a wider sense, all C64 commands are BASIC commands.

The BASIC interpreter reports READY. and the blinking cursor shows the user that the computer is ready for input. After a BASIC command is typed in correctly, the command will be executed; otherwise an error-message will be reported, followed by READY. and a blinking cursor again.

The BASIC interpreter works off a BASIC program line by line from the first line number (0) until the last line number (63999). The program is interrupted by any BASIC errors, the RUN/STOP key or the execution of the BASIC-Commands END, STOP, LIST or NEW executed.

Example of a BASIC program:

Explanation: This example demonstrates the abbreviation of the command PRINT by the token: '?'. In this way you can create a program line with 241 characters or 7 lines.