The status is dramatic, as usual: An enemy which is not more closely defined attacks the player's home country and has already occupied the whole southern coast with ground forces, that get ready to advance further into the heartland. As defence there are only 3 heavily armed "A.C.E Mark 2.1" multiuse-allweather-allarea-fighting jets left and of course the player is the only pilot left, who has to fight with this the aggressor by land, sea and air until he himself has lost all his lives or the last hostile units have been beaten.

Before the fight itself starts the player has to or respectively can at first set the difficulty grade in the main menu, choose day, night or winter time with the corresponding colouring of the landscape, view the highscores or get impressed by the demostration mode.

Furthermore the player can choose if he wants to fly alone or take with him a second player as back-up in the position of the gunner. He will operate all the weapon systems except for the cannons, which can still be fired by the pilot. The second player can also move the otherwise fixed visor over the screen, if guided missiles are used, though this only really simplifies targeting, if the pilot and the gunner form an attuned team. ("More to the right! No, not that far! Stop moving the joystick you a...").

When you have adjusted everything to your taste you only have to choose one of four missile loadings before the takeoff, which are more or less useful against certain types of targets:

Additionally to the chosen missile load, there are also always 30 flares for defence of hostile missiles and 6.000 shots ammunition for the cannons loaded, which can destroy every type of target, if you aim well and keep shooting for long enough. 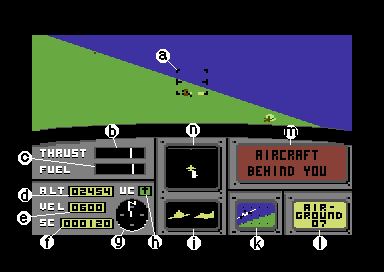 After that you find yourself on the taxiway of one of the three home bases in the cockpit, which consists half of a view on the landscape and the other half of the dashboard. The latter cotains a series of displays and instruments, of which you should be able to interpret the most:

a) Visor: Targets, that are inside this square and which can be recognized as distinctly as the tank on the screen, can be shot with the corresponding weapons.

c) Fuel display: the further the needle is at the right, the more fuel is in the tank.

g) Compass: the rough flying direction, the N is of course "north".

i) Attitude display: shows the attitude of the wings and the aircraft nose relatively to the horizon.

k) Tail camera: shows the happenings behind the own airplane without having to rubberneck the neck.

m) Computer display: here the board computer shows all kind of messages.

n) Radar: top view on the surrounding around the own airplane (the small yellow plane). Ground targets, shops and helicopter are shown as grey dots, planes as white dash, whereby arrowheads at the upper or lower end hint to planes above or below you.

The map: The hostile area is coloured in read, the white flashing thing is of course your aircraft, at the moment on eastern course.

Afer having chosen the weapons and managing the start you can move freely inside the operational area and do whatever you please, but for the sake of points and the home country you should fight the enemy. For this you can get an overview of type and position of the enemies with the help of the map and define the course to the desired target together with the compass in the cockpit. The map shows the complete operational area until the uttermost rim. Next to your own position and rough flying direction you are also shown the course of the front, allied bases and hostile and friendly units with the corresponding icons, to which additionally the adequate labels are faded in in turns.

The main targets are at first the hostile ground forces, which consist of tanks, combat helicopters and anti-aircraft missiles (SAMs) and move rather aimlessly but fast through the operational area; if you come across one of the three bases by chance during the process, it will be destroyed. As a support for the ground forces, the enemy will send pursuit planes over the sea which follow the player persistently. 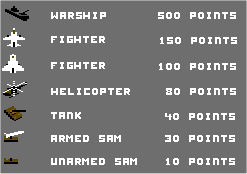 "The enemy" in all its glory. The combat plane with straight wings is by the way more agile as the one with the delta wings and therefore worth more points.

If the player makes it to defeat all ground forces by causing enough damage to their rows, he must also destroy the enemy's war fleet which appears in front of the coast, to evacuate the puny rest of the invasion troups. If this is also done, the conflict is seen as ended victoriously and the player has good chances to enter his name, the date and many points into the highscore list. To reach this, you should bring some free time, though, depending on the difficulty grade a complete party can last well a few hours.

Except for the training level, the enemy reacts rather angrily to attacks and defends himself with missiles flak grenades and/or MG fire. Hits can harm radar, rear camera, flight controls or drive gears, but the A.C.E- jet himself cannot be destroyed. Only an engine failure might force you to leave the plane via the ejection seat, but this is only possible over allied area and requires at least one reserve plane, otherwise you have to prepare for a quick virtual death and with this the end of the game.

Only a few meters to the safe ground, wasn't there something I had to think of...?

Sooner or later you will have to land on one of the three allied airports for new weapons, whereby you have to come to a halt on the runway at the right time, so that enough of the track is left to take off again. After a successful landing the machine is fuelled up and repaired and you can choose a new weapon load, then you go back to the cockpit and the fun restarts.

The air-to-air-refuelling looks rather phallic.

If you only need fuel you can also try an air-to-air-refuelling - for flying simulations of that time a rather unusual option. But the refuelling process is rather longsome and one flies away from the fighting events so far that you have as little fuel on board as before the refuelling when returning to the front.

Landing and air-to-air-refuelling are rather dangerous and thoughtless actions can easily end in a catastrophe, but at least the enemy stays with generosity in the background during these difficult manoeuvres and does not bother you additionally. 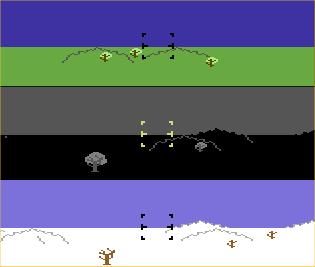 The simulation of physical correlations during the flight is highly simplified, therefore the controls during the flight are limited to the most necessary and can be mostly accomplished by joystick; only for the thrust control and other game functions the player has to use a handful of keys.

Title screen and menus are kept markedly simple but functional. It was abstained from any type of end screen / jubilation sequence for a successful ending of a conflict, instead the title screen or the highscore list appear directly.

For the sight out of the cockpit ACE uses a pseudo 3D-design with plane multi-coloured objects, of which almost all are realised by the mean of hardware sprites. Through this, the perspective and size of the objects are not always correct, but the design is rather fast and gets an impressive feeling of speed across to the player in return especially in a lower height. The surroundings seem rather monotuous, the display of a coastline is avoided by switching to the map during the change from land to water, which heavily constrains the player when a fight action is happening at the same time.

Missiles of all types are shown as flashing dots, exploding enemies and flak grenades as flashing blotches and exploding "A.C.E"-jets as flickering full screen, which in combination witt the explosion noise can startle you well, especially as the own death happens mostly rather unexpectedly. A shaking cockpit signalises that you have been hit by hostile shots.

Any type of music was omitted, during the flight you can hear various variations about swooshing and hissing noises as sound effects for engines, weapon shots and explosions. The comprehensible speech output is remarkable though a bit slurry, which enforces the illusion to sit in an airplane: The board computer constantly utters status and damage messages of all types as well as warnings from missiles or thoughtless flight manoeuvres, and during the air-to-air-refuelling you are directed into the right position by verbal commands.

Joystick in port I:

Do not destroy your own plane and shoot all enemies getting into your sight.

The version available on the Gamebase64 by Nostalgia (see "Links") offers a trainer for unlimited fuel and ammunition.

For softies, there is also a training level implemented into the game, where enemies do not shoot back and you can only die by unskilled manoeuvres.

A quirk enables you to dash around with a speed of about 2000 and minimum mileage. For this you go to maximum speed and start the vertical dive from a height of 50.000 feet and reduce the thrust to 0 when the speed reaches approx. 1800 knots.

Colt Seavers: "When ACE came into my hands for the first time, I had just seen Top-Gun at the movies and was mutated to an air-fight-nerd temporarily, correspondingly the game was celebrated extensively with enthusiasm in the one and two player mode. Although the game speed is still today impressive for a C64 and some features as air-to-air-refuelling or speech output were at that time very progressive, ACE is, however, rather snookered compared to the audiovisual firework of today's 3D. The game is not bad, but on the long run, the diversification is missing and especially the adrenalin. If only there was more danger of death coming from the hostile missiles, ones hair would not only stand on end during landing and air-to-air-refuelling. Therefore 7/10 points with much nostalgia bonus and a randomly caused endorphine boost.".

In both disk and cassette version the best 5 scores are saved on disk, at the first this happens automatically, at the latter is has to be loaded manually over the main menu and saved after entering the highscore.

The game was also available for the Commodore Plus/4 as well as Spectrum and Amstrad CPC.

There are two followers for the C64, ACE 2 with 2-player-duell-option and ACE 2088, which takes place in the future and in space. We will see.. 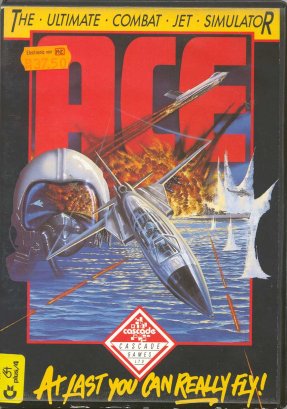 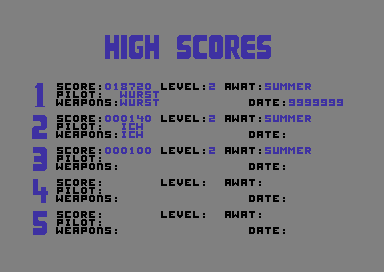